October 2015
Persona 4 the Pachiko is a pachinko version of the original Persona 4. This follows in the footsteps of the Persona 4: The Slot pachislot machine announced in August 2013.

It contains a brand new footage and illustrations, as well as ones from previous Persona 4 releases, Persona 4 the Pachinko represents the latest model in the continuous battle-type pachinko machine.

It was originally going to be released in September 28, 2015, but released in late October 2015 instead. 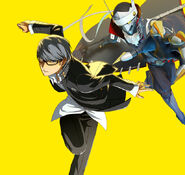