Persephone is a recurring demon in the series.

Persephone, also known as Kore (lit. "The maiden"), is the goddess daughter of Zeus and Demeter in Greek mythology. She is the goddess of vegetation that was said to be kidnapped by Hades, leading to her becoming a goddess and queen of the underworld. There are many variations on the myth about what happened, but most have her playing with the Oceanids until the earth cracked and Hades appeared to kidnap her and take to the underworld. Persephone's mother refused any deity that wanted to be with Persephone and kept them away from her, and it was said that Zeus gave her to his brother Hades.

After eating the food of the underworld, which is believed to have been pomegranate seeds, she would be forced to return to the underworld as all those who eat the food must return there. For this reason, Persephone spends one-third of the year with Hades and the rest with her mother. In some depictions, she willingly went with Hades to the Underworld and so ate the pomegranate seeds so she could stay with her husband.

In Roman myth, she is called Proserpina and her mother is Ceres.

"The goddess who became Hades' wife in Greek lore. She is said to have the power to bring fertility to the earth. While playing with the Oceanids, the earth cracked and Hades appeared to take her away to the underworld. Without her, the earth grew barren, but she was able to return for several months of each year, bringing fertility back while she was free."
—Shin Megami Tensei: Strange Journey compendium

Persephone appears as a normal enemy in Sector Grus. She also has a part in the EX Mission That unforgettable taste..., in which it is revealed she is friends with Hariti, giving the protagonist a human-flavored pomegranate to sate Hariti's taste for human flesh.

Persephone participates in the Challenge Quest, RxW Smacktacular XIII. Part of Team Red, she is found in Shinjuku Golden Gai. Stated that her sorrow is as sweet as the fruit that doomed her, the unwilling queen of the underworld admits that she's not into murdering people, but since participating lets her be on TV and it's part of her job, she wants to get it over with. After the fight, the hunter mentions that all her opponents had smiles on their faces when they died.

Persephone can be encountered in the main temple of Tsukiji Konganji. She can teach Nanashi the Bufudyne, Death's Door and Mamudoon skills through her Demon Whisper. Persephone benefits from learning Darkness, Ice and ailment skills.

Persephone is the final boss of the two part "School of the Heart" Climax Theater quest. She is the malevolent side of the phantom Akari Torikiri, who "infected" Naozumi Kariyazaki and his students and remade them into her "ideal" classmates. After fighting the fragments of the Parasite Persona and defeating Kariyazaki (and a female teacher who Persephone temporarily remade into a second Kariyazaki), Persephone appears from the students' phones and attacks the party, but is defeated.

"The goddess that became Hades' wife in Greek mythology and who is said to have the power to bring fertility to the earth. While playing with the Oceanids, the earth cracked and Hades appeared and took her away to the underworld. Without her, the earth grew barren, but she was allowed to return by the other gods for several months of each year, bringing fertility back while she was free."
—Shin Megami Tensei: Liberation Dx2 Demonic Compendium 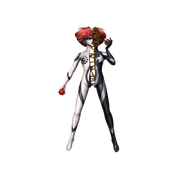 Persephone as she appears in Shin Megami Tensei: Liberation Dx2

Persephone as she appears in Card Summoner
Community content is available under CC-BY-SA unless otherwise noted.
Advertisement