Penthesilea is a Persona in the series.

Penthesilea is one of the Amazonian queens that appear in Greek mythology. She is the daughter of Ares, the Greek god of war, and Otrera, queen and founder of the Amazons. It is said that she has several sisters.

According to legend, Penthesilea accidentally killed her sister Hippolyta, and as penance for her actions, she joined in the Trojan War, leading the Amazons to battle. She joined the war in its tenth and final year, and was said to have killed Achilles, but Zeus brought him back to life, and Achilles killed her.

When the hero lifted her helm he fell in love and agreed to return her body unharmed to the Trojans for proper burial. The brutish Thersites mocked him for the mercy and, some say, gouged out Penthesilea's eye with a spear. For this Achilles slew him.

Penthesileia's name means "mourned by the people" from the Greek words penthos and laôs.

Penthesilea is the initial Persona of Mitsuru Kirijo. She carries an affinity to Ice, and appears as an iron-masked queen wielding a dagger and a rapier.

Penthesilea is shown to have similar abilities to Fuuka's Persona, Lucia, but to a much less powerful extent. After Fuuka joins SEES, she takes over as the group's tactical advisor, and Mitsuru joins the front lines.

Mitsuru has to go past level 50 before Marin Karin can be removed from Penthesilea.

In Persona 3 Em, Penthesilea has an Arche form, Arche-Penthesilea, which serves as a boss in the game.

Concept artwork of Penthesilea in Persona 3

Concept anime sketch of Penthesilea in Persona 3 The Movie 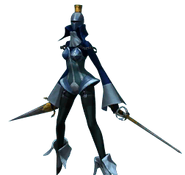 Penthesilea in Persona Q: Shadow of the Labyrinth 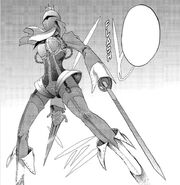 Penthesilea in Side P3

Penthesilea in Side P4
Community content is available under CC-BY-SA unless otherwise noted.
Advertisement