Pegasus is a demon in the series.

Pegasus is a winged divine stallion also known as a horse usually depicted as pure white in color that appeared in Greek Mythology. He was sired by Poseidon, in his role as horse-god, and foaled by the Gorgon Medusa. He was the brother of Chrysaor, born at a single birthing when his mother was decapitated by Perseus.

The symbolism of Pegasus varies with time. Symbol of wisdom and especially of fame from the Middle Ages until the Renaissance, he became one symbol of the poetry and the creator of sources in which the poets come to draw inspiration, particularly in the 19th century.

Many poets write about his ascent to Mount Olympus after his birth and his obeisance to Zeus, who instructed him to bring lightning and thunder from Olympus. Friend of the Muses, Pegasus is the creator of Hippocrene, the fountain on Mt. Helicon. He was captured by the Greek hero Bellerophon near the fountain Peirene with the help of Athena and Poseidon.

"A winged horse that can only be mounted by a warrior who is pure of heart."
—Demonary, DemiKids 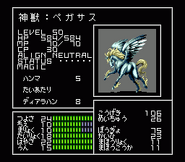