Pazuzu is a demon in the series.

Pazuzu is an apotropaic being from Mesopotamian mythology, first attested in the late Bronze Age and described as a king of demons, as well as a personification of the west wind. His origin is uncertain, but various connections with personifications of winds serving gods as messengers, Humbaba and pessu (a creature derived from Egyptian god Bes) have been proposed by researchers.[1]

Pazuzu was commonly invoked in exorcisms and in apotropaic magic (similar to other monsters, such as the aquatic Lahmu), and as such was also depicted on amulets.

Magical texts from ancient Mesopotamia state that he was believed to introduce himself to people invoking him with the following formula:[2]

I am Pazuzu, son of Ḫanpu, king of the evil wind-demons, I ascended a mighty mountain that quaked, and the winds that I ran into there were headed West. One by one, I broke their wings.

While he could be invoked against various demons (such as lilu, ardat-lili or lilitu), his most frequent enemy was Lamashtu, who was believed to cause harm to mothers and children, especially newborns. While Pazuzu was regarded as benevolent towards humans despite his demonic nature, Lamashtu was his opposite. She was imagined as a disgraced goddess cast down from heaven because of her cruel tendencies and cursed with a demonic form by Enlil. In incantations, Lamashtu also served as enemy of various deities such as Ishtar, Nanaya or Ninkarrak, as well as Pazuzu.

After defeating the Minotaur in the Devil Busters game, the protagonist finds a strange statue in the game and unseals it, revealing Pazuzu. Pazuzu reveals that he is a servant of God and that the protagonist and his friend are the Messiahs destined to save the world from the demons that came through a rift created during the nuclear war 35 years prior. Giving the protagonist a handheld computer and the Demon Summoning Program, Pazuzu warns about demons invading the shelter before departing. Once they reach the surface, Pazuzu commands that the two join with his servant Orthrus at the Princess Hotel in Shinagawa, and head to the ruins of Tokyo Tower after a witch who betrayed him. The witch reveals that Pazuzu is simply using the two to gain power over Bael and the protagonist agrees with her, causing the friend, who is still loyal to Pazuzu, to depart with Orthrus. It is later revealed that Pazuzu is truly aligned with God and the other demons view him as a traitor because of this. The protagonist and the witch end up having to defeat and behead him in order to pass onwards.

"The king of the desert in Mesopotamian mythology. He has the wings of an eagle, arms and legs of a lion and the tail of a scorpion. It is said that the disease he brings with him cannot be cured."
—Shin Megami Tensei III: Nocturne compendium

Pazuzu is the demon ally of DB Mikanagi. He appears as a regular mob in the temple area of Ueno's Mirage gold level instance and as one of the supporting mobs in Samael's boss room in the gold level of Shinagawa's Catacombs of the Templar Knight.

"A demon from Sumerian civilization, he governs the southwestern wind.
He has the face of a lion, the body of a human, the wings of a bird, the talons of an eagle, the tail of a scorpion and a curved horn protruding from his forehead. It is said that the wind he blew from the Persian Gulf spread disease throughout the land."
—Shin Megami Tensei V lore

Pazuzu appears as a subquest boss in "The Cursed Mermaids." After accepting the quest from the Mermaid in Shiba Park, the protagonist must defeat the Hydra at Tokyo Tower in order to gain access to the path to reach Akabanebashi to the southwest. Upon approaching the pond with the Mermaids, Aogami will warn the protagonist about a strong demon. Drawing closer causes Pazuzu to reveal himself and engage the protagonist in battle. After being defeated, he expresses his surprise at losing but that the curse he placed won't fade so easily.

"The Babylonian lord of wind and scorching sands. Has a lion's head and arms, eagle-clawed feet, bird wings and deadly poison. The diseases he spreads can only be cured by magical means."
—Persona 4 compendium

Pazuzu specializes in Darkness spells and can be obtained through Shuffle Time in the Secret Laboratory.

"The Babylonian lord of wind and scorching sands. He has the body of a man, a lion's head, the claws and wings of an eagle, and has a deadly poison. The diseases he spreads can only be cured with magic."
—Persona 5 background

Pazuzu is the fifth Persona of the Devil Arcana and can only be obtained through fusion in the Velvet Room. He is one of three Personas to learn the Bad Beat skill and the first Persona that the protagonist can use in battle to use Eigaon. When itemized through Electric Chair execution, Pazuzu yields a Maeiga skill card.

"And the Word created Death... In Death, all things a equal. You are no exeption to this rule! Now try and fight me, for I am the Reaper!"
—Pazuzu, Last Bible

Pazuzu is the Reaper of Last Bible world, created by Lasobelak. He can be obtained via Fusion accidents.

"Diseased demon that awoke from a very long sleep. It has yet to recover its powers."
—Demonary, DemiKids

Known as Pazu and has the power Repugnant.

Pazuzu is the leader of the Imperium forces on Jin's route. He is faced in the Dark Palace and his role is similar to Scathach. Unlike her he does not put Akira to sleep before the battle. After the battle he flees with Jin following him. The others attempt to follow as well but the doors close. He has Rand sacrificed to the seal that holds his master Belzebu and forces Jin to release him. Pazuzu is killed by his master after he is freed as he has served his purpose.

Pazuzu is the Demon Companion for Tadashi Nikaido. He can only be fused under certain conditions. This demon can be unlocked either by defeating Pazuzu before defeating Kaido on the 5th Day (if the player fails to save Keisuke Takagi from being killed by Kaido), or by initiating Naoya's ending through speaking to Kaido first.

"The evil Babylonian lord of southeastern wind and scorching sands.
He has a lion's head and arms, a human body, eagle-clawed feet, bird wings, and a scorpion's tail. He also has an oddly bent horn on his forehead. It's said he comes alongside the poisonous, scorching winds from the Persian Gulf to spread plague."
—Devil Survivor 2 compendium

"A demon lord of southeast winds and scorching sands from Sumerian lore. He's a vile demon with the head and arms of a lion, the body of a human, birdlike wings, hawk like talons, a poisonous tail like a scorpion, and a strange horn protruding from his head. Pazuzu rides the warm winds from the Persian Gulf spreading diseases that can only be cured by magical means."
—Shin Megami Tensei: Liberation Dx2 compendium

Pazuzu appears as a separate demon, complete with its own team in both of these battles. 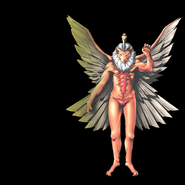 Pazuzu as he appears in Persona 4 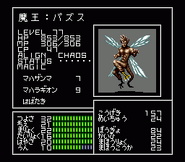 Pazuzu as he appears in Shin Megami Tensei III: Nocturne

Pazuzu as it appears in Card Summoner

Pazuzu as he appears in Devil Survivor

Pazuzu as he appears in Devil Survivor 2