< Party
View source
watch 02:59
Metroid Dread - The Loop
Do you like this video?
Play Sound 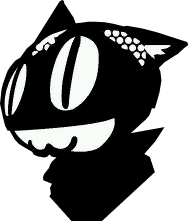 This article covers information about Morgana as a party member, including uses and strategies, in Persona 5 and its spinoffs.

Morgana first becomes playable on 4/11, soon after the protagonist's awakening, and starts at Level 2. He specializes in Wind skills, healing, and downing enemies through Critical hits.

Morgana is able to heal the group with special skills, and unique to him as a party member, revive fainted allies as well. Morgana can also use Me Patra to cure the ailments Dizzy, Forget, Sleep and Hunger at once for the whole party.

Morgana has the highest Luck stat out of all Phantom Thieves, although very close to Ann Takamaki. This helps stack damage over time through critical hits and One Mores. In addition, this stat can also enhance Lucky Punch, a Physical skill that has minuscule damage, but also a high chance of performing critical hits on enemies, downing them and leaving them vulnerable to the party's attack in the process. Morgana can later learn Miracle Punch, which delivers medium damage, and more importantly, has the highest Critical hit ratio out of any skill. Both of these skills can help with swiftly deactivating enemies and having them receive increased damage, and are especially useful for initiating Hold Ups and All-Out Attacks when there are very few enemies on the field. Otherwise, by giving away his turn, he can quickly start Baton Passes with his allies without the need to exploit an enemy weakness.

Morgana has the second highest agility stat from the group, only slightly behind Makoto Niijima. This allows him to usually act early before other allies. Being able to heal early can be an useful perk, especially when it comes to avoiding an ally getting knocked out by an enemy before he can act. This healing can further be used in succession with the Lucky Punch set of skills, which consume HP upon usage.

In addition, at the same time, this stat can sharpen his attack accuracy and evasion. His available armor options also grant a substantial boost to evasion compared to the available equivalent for other party members. He can also use Masukunda, a skill which debuffs enemies' accuracy and evasion for 3 turns, making the whole party more untouchable. This also ensures success for their multi-target magic skills, as it's much more likely for those to miss an enemy or two.

However, Morgana's the most fragile member of the group, having the lowest Endurance stat and HP total. Although evasiveness and luck can help cover up from attacks, status ailments and instant-death skills, it is easier for Morgana to faint upon getting hit compared to other members. It's important to give him proper care in battle in order for him to support the rest of the group and make the most out of his abilities.

Morgana has the second weakest physical attack stat, and although he has the second highest magic stat, he's the only party member that doesn't learn a Severe or stronger attack by leveling up late in the game, with his skills only being able to inflict Heavy damage at most. In its place, on Level 75, Morgana can learn Salvation, which can fully heal the entire party and cure any non-special ailments.

Morgana is naturally resistant to Wind skills, and is vulnerable to Electric skills. Morgana's Wind skills are slightly cheaper in SP when compared to other elemental attacks, making it possible to save up in the process. More importantly, his Wind skills are able to inflict Technical damage on enemies that have been burned from Fire skills.

If Morgana's Persona Zorro evolves into Mercurius, he'll be able to learn Evade Elec, boosting the chance of evading Electric attacks. In addition, he now can completely block Wind, and gain resistance to Bless. Unlike other party members, Morgana's Persona is only able to evolve on December 24th, as his Confidant is automatic, meaning these perks can only be used while exploring the Depths of Mementos and anything after.

Morgana's strongest melee weapon is Claiomh Solais which is created by performing an Electric Chair Execution on Mother Harlot. His strongest ranged weapon is Utopia and can be bought from Untouchable on 12/22. It has the chance to inflict Forget on an enemy when used, and is the only weapon in the game with 100 accuracy. However, damage-wise, Dreamstone II has the highest attack power out of any of his weapons, although it doesn't have the remaining benefits the Utopia has. The weapon can be received by customizing a regular Dreamstone at Untouchable.

In Persona 5 Royal, Morgana can learn Pulinpa on Level 19, a skill with a high chance of Confusing a foe. His high Luck makes it much more likely to inflict, and can generally be used for stalling and grinding items and money. If the protagonist reads "Knowing the Heart," Morgana will also be able to use his Wind skills in succession to perform Technical damage on the afflicted foe.

Morgana's special Persona Trait is Proud Presence, which helps increase the effect of allies' healing skills when he's on the field.

Morgana's Persona will automatically transform into Diego on the evening of January 10th, a few days before the full group is able to properly infiltrate Maruki's Palace and the Path of Da'at. Diego will make it possible for Morgana to learn Miracle Rush, a variation of Miracle Punch, which now targets all enemies. Like with other party members, this skill can only be used during the very end of the game. In addition, his Persona Trait will upgrade to Majestic Presence, which can also save SP.

Morgana's stat distribution in Persona 5 Strikers is very similar to that of Persona 5, with the exception of several minor stat raises. Hence, he plays very similarly in Strikers as well.

Morgana's battle style has him focused more as a healer with a side of offensive magic damage. Additionally, he may be able to cast Miracle Punch via Combo Attacks or Master Arts. Doing so will not cost any HP to use.

Morgana's ability to inflict Technicals is emphasized, as he can learn the skill Technical Adept, which increases damage inflicted by technical hits. This in particular can be made use of if he teams up with Ann Takamaki or the protagonist, who both have the potential to inflict their enemies with Burn. Additionally, he is able to learn Dormin Rush, a physical skill which has a chance of inflicting any enemy within a wide range with Sleep, essentially making them vulnerable to a Technical hit from any direction. Furthermore, its ability to inflict Critical hits can also be exploited.

This section compiles various strategies and uses of Morgana in terms of more expansive circumstances.

If Ryuji rarely spends his SP and/or is not in a position to deal damage, he may use Tarukaja on Morgana to have him deal damage with his Wind skills, considering they're cheaper than other magic skills, letting him conserve SP in the process.

Morgana may also use Masukunda to boost the accuracy of Ryuji's Physical skills (as well as melee attacks.)

Morgana and Ann may naturally work together with their Technical combination: as Ann deals Fire damage, her enemies may be inflicted with Burn, in which case Morgana's Wind attacks will receive a damage boost on the afflicted targets: although Morgana has the 2nd highest magic stat behind Ann, his attacks may surpass hers if they're under the status of Technical.

Ann's Tarunda also supports Morgana in terms of sustainability, and also boosts the value of his healing abilities as well, as their HP is that much more difficult to deplete. This also supports his reviving abilities, as it reduces the risk of recovered allies to faint immediately after.

In the scenario that Morgana's busy, Ann can use her own healing skills on him as backup, even if they're only single-target.

In Persona 5 Royal, as Technical hits are able to Down enemies (although the Technical Rank needs to be maximized for them to guarantee a Down), Ann's ailments can be used efficiently with Morgana: the Wind/Burn combination can now allow Morgana to make use of 1 More, or even pass the baton to another user.

Under these rules, Ann's Dormina can help extend any Baton Pass streaks for the party, as any attack will inflict the Sleeping target with Technical, although it wears off immediately after being hit. This artificial streak can be further extended with a Lucky Punch: where the first recipient of the Baton Pass will either have to target a single enemy's weakness and avoid the Sleeping target for the third recipient, or target all enemies regardless and ensure the second recipient has a target left to Down via weaknesses. That way, Morgana and Ann both artificially extend the party's Baton Pass streak by 2, with only 1 recipient left to act and exploit weaknesses. The protagonist may be used as the 2nd recipient to exploit the weakness of any standing enemy, unless the other available party member is able to Down another enemy on their own.

However, Ann herself may be the final recipient of Baton Pass, and if she were to use Concentrate before she gets called in the streak, she could be able to inflict massive damage: if her Baton Pass Rank is maximized, the damage she inflicts will be over 6 times the normal attack would inflict. As the damage on Downed enemies is increased, the damage will be near 9 times the usual: depending on the circumstances, All-out Attack may be skipped if Ann's attack is enough to shred enemies.

Yusuke's Sukukaja may support Morgana's Lucky Punch: although the skills' Critical rate are already low, the same applies for their accuracy: by increasing his accuracy, Morgana will have higher odds of landing Lucky Punch successfully, even if the overall increase is small on its own.

Regardless, if Morgana were to strike successfully and Down the enemy, he may pass his extra turn to Yusuke, letting some of his skills deal extra damage via Baton Pass.

Haru may be able to protect Morgana with her Tetrakarn and Makarakarn skills, in relation to his low defenses and if his weakness is struck.

These kinds of abilities emphasize on the party's ability to emphasize on streaks, as although Morgana acts as a trigger, Haru neutralizes beneficial effects to the enemy (Downs & 1 Mores) and nullifies any blocks that prevent special statuses (All-out Attacks and Baton Passes) by healing status ailments. In short, Morgana and Haru teaming up ensures the party has the upper hand in accessing streaks.

In Persona 5 Royal, Morgana may use Pulinpa to Confuse an enemy: if "Knowing the Heart" has been read, both Morgana and Haru may single out that enemy with their Gun or Wind skills. Otherwise, Morgana may keep it up with Confusing foes and let Haru deal damage. On another hand, Haru may use Tentarafoo instead, and have Morgana take the offense with multi-target Wind skills instead.

This section covers strategies that cannot be utilized by any other party member.

Although the protagonist cannot be revived, he is usually the only other party member that may revive Morgana if he were to faint; this supports him in utilizing his own recovery abilities in return.

The protagonist may also join Morgana in utilizing the Lucky Punch set of skills, helping one cover for the other if it were necessary to set up a combo of multiple Criticals in a row.

The protagonist is also able to use Rebellion on Morgana to increase his Critical rate. This also applies to Revolution which increases the Critical rate of all allies, as although it's a riskier approach since it also boosts that of enemies, the difference is nearly insignificant if the party manages to pull off a fatal streak before they can act.