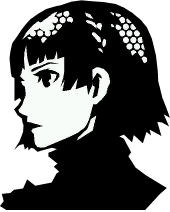 This article covers information about Makoto Niijima as a party member, uses and strategies in Persona 5.

Makoto first becomes playable on June 20, the day before officially beginning infiltration on Kaneshiro's Palace. She starts at Level 21. She specializes in Nuclear skills, defense support, and utilizing Technical damage.

Makoto's stats are mostly evenly distributed, only taking away lots of luck in exchange for a bit of Strength, Magic and Agility. However, this is enough to make Makoto the most agile party member available. This allows her to act before other party members and sometimes enemies and makes her more precise in battle.

Makoto excels in sustainability, most notable through her ability to use Rakukaja and Marakukaja, which can buff defense for 3 turns, whether it's on a single ally or the entire party. Makoto can also can give herself Rakukaja at the start of the battle when she learns Defense Master. On the other hand, she can negate all debuffs from the opponents with Dekunda. Both can support against fainting in combat. When using defense buffs, planning ahead is recommended.

To an extent, she's able to restore Medium amounts of HP to an ally, only being able to fully restore the group's HP later on. With the addition of having high agility, which allows her to act before other opponents, this healing can help enhance her defensive abilities, which can make it easier for her to put her defensive buffs to use even if a party member is low on HP.

Makoto is strong against Nuclear skills, and is weak against Psy. With her Nuclear skills, she'll be able to perform Technical damage against enemies that have been inflicted with Burn, Freeze or Shock. Makoto has a strong emphasis on subsequently inflicting Technical damage from the after-effects of Fire, Ice and Electric skills, which all have a small chance of inflicting their respective ailment. Additionally, she can rely on Flash Bomb, an offensive skill that has a minor chance to inflict Dizzy.

However, despite being generally defensive, her low Luck makes her prone to getting hit by Criticals, status ailments and instant-death skills, as well as being less than likely to serve those in return. She is especially vulnerable against mental ailments, as this leaves her vulnerable to Technical+Weak damage from Psy skills.

If the protagonist maxes out Makoto's Confidant, her Persona will transform into Anat, making her resistant to Curse skills, and block out Nuclear skills. She will be able to learn Evade Psy as well, making her more evasive against Psy skills.

Makoto has two separate weapons for her strongest melee weapon. Sabazios is her overall strongest melee option as it has 8 more points in Attack than Vajra and it gives her a +Critical Rate up buff. To create this, an Electric Chair Execution must be performed on Cybele. Vajra requires Asura and has a high chance of inflicting a random ailment on a foe. Her strongest ranged weapon is Judge of the Dead, which is created through an Electric Chair Execution on Michael.

In Persona 5 Royal, Makoto will know Makajama upon joining: this skill has a high chance of inflicting Forget on one foe and will come in handy against the Bael boss fight, as the Technical Damage induced by status is mandatory for bypassing his bodyguards in order to prevent a daunting drawn-out fight.

Makoto can perform Showtime attacks with Ryuji Sakamoto and Haru Okumura separately. Her Showtime with Ryuji can be unlocked from June 22, while Haru's is on October 30.

Makoto's Persona Trait is Gaia Pact, increasing allies' chance of inflicting Burn, Freeze or Shock by 25%, making it easier for her to perform Technical attacks.

If Makoto's Confidant has been maxed out, starting from January 17th, a special Third Awakening scene will become available, where her Persona will merge into Agnes, granting her the skill Checkmate, which debuffs the attack, defense and agility of all foes for 3 turns. In addition, her Persona Trait will change to Gaia Blessing, making it much more likely for Burn, Freeze and Shock to be inflicted by allies.

Makoto's strongest weapon options remain the same, though the use of the fusion alarm will create the strongest variations. Vajra becomes Unparalleled Vajra with the same effect as before. Gordios is the upgraded version of Sabazios. The difference between the two weapons are only 5 Attack instead with Sabazios having the higher Attack. Judge of Hell's variant is Judge End.

Makoto's stats and skills in Persona 5 Strikers are nearly the same as those in Persona 5, meaning she functions in battle the same way as in previous installments.