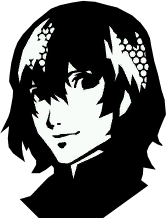 This article covers information about Goro Akechi as a party member, including uses and strategies, in Persona 5 and Persona 5 Royal. For strategies on the boss battle against him, see Goro Akechi → Strategy.

Akechi first joins the party on October 29th at Level 45 with Robin Hood, during the infiltration of Niijima's Palace. Unlike other party members, Akechi is only active in the party during that Palace, and leaves once it's cleared. He specializes in Bless, Curse and Almighty skills, and emphasizes direct focus in taking down foes.

Akechi's stats are almost evenly distributed, only losing Luck in exchange for higher Strength. This helps him deal high amounts of damage, particularly with Megaton Raid. In addition, his passive skill Fortify Spirit helps him balance out his weakness to evading status effects caused by his low luck.

Akechi wields magic attacks of both Curse and Bless type: even though both attack types have no secondary effects, such as inflicting ailments or exploiting Technicals, they have a slightly higher base power than their counterparts. Although unlike other party members, he sports no skills to break enemies that resist these attacks, he can also use Almighty skills, which ignore affinities altogether, albeit it means they cannot exploit any weaknesses, nor land Criticals, meaning it'll be a conclusive attack for his turn.

On the other hand, Akechi has access to instant-death skills of both Bless and Curse type, and can focus on attempting to instantly kill a target at the risk of dealing nothing that turn, instead of slowly taking down their health. Although effective, it can make him susceptible to opponents lowering his own health with normal attacks. As such, it is recommended to rely on only whenever the enemy has strengthened themselves with buffs or debuffs, or in emergencies where a regular attack likely won't defeat the enemy.

Unlike other party members, Akechi's learnset doesn't allow him to support other party members: his abilities are more catered towards himself or his opponents, especially since the buffs in his movepool are only directed towards himself. This even applies for his attacks, as most cannot connect via Technicals, and they are rather restricted in letting him receive 1 Mores and begin Baton Passes. The only case he can help them is when they've fainted, directly reviving an ally with maximum HP with Samarecarm, which could help give back up against deaths from instant-kill attacks in particular. However, despite this disconnect, it's still recommended for other members to spend their resources in supporting him so he can make the most out of his abilities.

Because of how Akechi leaves the party early, he has many higher level skills that he might learn before he does so, so it's unlikely those will be of use anyway, especially since high level differences alone make it easier for the party to overwhelm enemies. Some of these skills include Mahamaon, Mudoon, Megidolaon and Debilitate. However, it is possible to level up Akechi slightly above Niijima's level to teach him the aforementioned Samarecarm.

Akechi is resistant to Bless attacks, and is weak against Curse. As such, Akechi should take caution in using Curse skills, as he may be Downed by his own attack against enemies that repel it.

Akechi starts off with a Lumina Saber and can acquire the Quasar Saber through Untouchable, his strongest melee weapon. He starts off with Moebius and his strongest ranged weapon is the Golden Beam, which costs 1,200 coins at the High Limit counter in Niijima's Palace. It has a medium chance of inflicting Despair. The protagonist cannot itemize any melee weapons or firearms for him in the Velvet Room.

In Persona 5 Royal, Akechi's original skills with Robin Hood are left untouched, with the exception of the addition of the trait Tactical Spirit, giving allies the chance of having the SP cost of their support skills halved.

However, on January 2nd, Akechi will rejoin the party with Loki. Although he shares the same base stats as Robin Hood, his weaknesses are modified: he is now weak to Bless, and completely blocks Curse. Akechi automatically joins at Level 75, unless his previous level from when he was in the party with Robin Hood exceeded that number, in which case his level will remain the same as before.

In addition, his skillset is completely changed. He cannot learn any skills from leveling up, and all of them are innate upon joining. Akechi no longer uses instant-death skills. Instead, his attacks are largely typeless and often damage-heavy.

His weakest attack is Eigaon, a Heavy Curse skill targeting 1 foe, which can be useful for exploiting elemental weaknesses. This is followed by Megidolaon and Riot Gun, severe Almighty and Gun attacks, targeting all foes. His strongest attack is Laevateinn, a Physical attack that deals Colossal damage to 1 foe. Both his Gun and Physical skills are backed up by his higher Strength stat, which is further boosted by Attack Master, which boosts his attack power for the first 3 turns of battle.

Akechi now has Debilitate by default, which lets him debuff the enemy's Attack, Defense and Agility for 3 turns. In addition, he now has Evade Bless, which makes it easier for him to evade Bless attacks. His vulnerability to status ailments from his low Luck is again covered up by Fortify Spirit, just like with Robin Hood.

However, despite being able to cover up with strong offense and cover most of his weaknesses, Akechi is still prone to having his Physical or Gun attacks repelled, which usually kills him, especially since they both eat up a significant amount of his own HP just to use them. In this situation, he can only hope to whittle down the enemy's health with his Almighty Skills.

From January 2nd, Akechi will be able to perform a Showtime with the protagonist.

If the protagonist follows the necessary criteria and dialogue options while maxing out his Confidant, on February 2nd, before the final infiltration and battle, Akechi's Persona will evolve into Hereward. He gains resistance to Psy, and can learn Rebellion Blade, an incredibly powerful skill that deals Colossal Almighty damage to one foe, and gains a 50% increase in damage against enemies that are knocked down (this is in addition to the already existing damage bonus against knocked down enemies.) In addition, his Persona Trait evolves into Ingenious Spirit, which has a chance of halving the SP cost of both support and Almighty skills.

As Akechi is oriented around Strength-based attacks, he can equip Physical skills, or add versatility to his Physical offense with Gun skills, particularly via the Triple Shot Belt (Triple Down) and the Special Shot Belt (One-shot Kill), both received when itemizing Seth.

During Niijima's Palace only, Akechi is also the only party member who can make use of instant-death boosting abilities, such as the Cross-Shaped Charm (Hama Boost) and the Skull Charm (Mudo Boost), increasing his odds of afflicting instant-death.

During Niijima's Palace, if Akechi is brought in Jazz Jin on Sundays, he can learn Makarakarn, Matarunda and Marakunda. Although Akechi won't be available for the following Palaces and will return with a brand new pool of skills in Maruki's Palace, he can make use of these three skills to support his own attacks:

During Maruki's Palace, the only skills that can be learned are Ali Dance, Arms Master and Spell Master, the first one of which halves the user's evasion against attacks, whereas the rest halve the cost of Physical and Magical skills respectively.