< Party
Edit
watch 02:05
Wiki Targeted (Games)
Do you like this video?
Play Sound 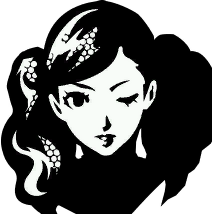 This article covers information about Ann Takamaki as a party member, including uses and strategies, in Persona 5 and its spinoffs.

Ann joins the party during the last battle of 4/15, at level 5. She specializes in Fire skills, magic damage, inflicting ailments and debuffing enemies.

In addition, she doesn't learn any Physical skills. This correlates to the distribution of her Strength and Magic stats, being both the weakest at Physical damage, and the strongest at Magic by a landslide, allowing her to deliver powerful magical blows even without the use of elemental weaknesses.

However, she's very vulnerable to attack, due to her low Endurance and Agility. Her low agility makes her susceptible to being struck before she can act, which doesn't cover as much accuracy and evasion either. However, there are numerous ways this can be covered up: the Tarunda skill can debuff the attack power of foes for three turns, and Dekaja negates all buffs. In addition, she can delay and stall opponents using Dormina, which has a chance of putting a single target to Sleep, or only in Persona 5, Tentarafoo, for a chance to Confuse each of them. Her high Luck stat supports her chances of successfully inflicting these ailments, and helps with backing her up from being inflicted with status conditions in return. She also has the ability to moderately heal 1 member per turn: this could be especially useful for supporting a single ally, or recovering her own HP.

Ann can learn Ambient Aid, a passive skill which relies on the weather to function, requiring it to rain or to have special weather available, meaning that it'll only be available during certain days in the story. When in effect, this skill makes it much more likely to inflict status ailments. For Ann, this includes Burn, Sleep and Confuse. In the case of Burn, the odds can be further enhanced with Burn Boost, which increases the odds of inflicting that status ailment, and is available at any time.

Late in the game, Ann can learn Concentrate, which will boost the next magic attack by 2.5x.

Ann is resistant to Fire skills, and is weak against Ice. As she uses Fire skills, it's possible for her to inflict Burn, making targets gradually lose HP for several turns. Technical damage can be done with Wind and Nuclear skills.

Unlike with other party members, if Ann uses her ranged weapon, the target will be randomly selected upon consuming ammo.

If the protagonist maxes out Ann's Confidant, her Persona Carmen will evolve into Hecate. This will grant her resistance to Electricity and completely block Fire skills. She’s also able to learn Evade Ice, a skill which makes it more difficult for her to become hit by Ice.

Ann's strongest melee weapon is the Hard Branch, which can be purchased from [[Untouchable]] on 12/22 and has a low chance of inflicting Sleep on strike. The Naraka Whip is also a solid option for Ann as it requires an Electric Chair Execution of Black Frost and has a high chance of inflicting Freeze on strike. Her strongest ranged weapon is Wild Hunt which is created by itemizing Odin.

In Persona 5 Royal, Ann can no longer confuse enemies with Tentarafoo at Level 30, as it has been replaced with Lullaby, an enhanced version of Dormina, which has a medium chance to inflict Sleep to all foes.

Ann can use Showtime together with Morgana or Yusuke Kitagawa. Her Showtime with Morgana can be unlocked from June 21, and Yusuke's from September 19.

Ann's Persona trait is Mastery of Magic, which may decrease the SP cost of allies' magic skills.

If Ann's Confidant has been maxed out, starting from January 13, a special Third Awakening scene will become available, where her Persona Hecate will evolve into Célestine. When this happens, she will learn High Energy, providing the effect of Concentrate to the entire party.

Ann's stats in Persona 5 Strikers are similar to those in Persona 5, aside from a few stat increases. Additionally, the skillpool between Strikers and previous games is also similar, meaning she plays similarly as before.

However, Ann can also learn Soul Thief, a new skill that allows the user to drain SP from enemies that have been inflicted with ailments.