Megan Taylor Harvey (P5S)
"It was inevitable, I suppose, that you'd make it here... Sss... Hhhrrr... This... is the gate to paradise... And I won't give it up... I'll use it to create my paradise... A place where nothing exists...
Fsshhhrrr... Everything is useless... Utterly useless. You... me... useless. These things... I do not need... Now begone from me... Fsssshrrrraaaa!"
—Pandora, Megami Ibunroku Persona

Pandora is a demon in the series.

Pandora, also known as Anesidora, is the first woman of Greek mythology, being born from clay. She was created by the gods, specifically by Hephaestus and Athena on the instructions of Zeus who was created to hold Pandora's Box. Zeus ordered Hephaestus to mold her out of earth as part of the punishment of humanity for Prometheus' theft of the secret of fire, and all the gods joined in offering her "seductive gifts." Pandora's deceitful feminine nature becomes the least of humanity's worries.

The gods gave her a husband, the titan Epimetheus, and several gifts, including Pandora's pithos (or a box in modern interpretations due to a Greek-to-Latin mistranslation) which she was half-heartedly warned not to open due to it containing "burdensome toil and sickness that brings death to men," diseases, and "a myriad other pains." While warning her, the gods actually wanted her to open the pithos. Prometheus, fearing further reprisals, had warned his brother Epimetheus not to accept any gifts from Zeus. But Epimetheus did not listen; he accepted Pandora. When her curiosity became too much, she opened the pithos, which unleashed all of the evils of mankind. Only hope remained in the pithos after she closed it.

Pandora is Maki Sonomura's ultimate expression of nihilism. After the death of Takahisa Kandori, Aki awakened Pandora only to have Pandora devour her, destroying her half of the other Mikage-cho in the process. Pandora then proceeded to steal the core of the DEVA System from the real world. After the protagonist and the "Ideal Maki" come in contact with the soul of the "real" Maki in the Sea of Souls and receive her compact, the party is able to enter the Avidya World and confront Pandora, who plans to use the DEVA System core in a bid for destruction of all reality. After she is defeated, she questions how the party could be so powerful, and is reminded that they are fighting together as friends and that she isn't alone. Her and the Ideal Maki then merge, and one by one the party members are sent back to the real world. As Pandora represents the negative and repressed qualities of her host and can be accepted and reformed, she can be considered as a prototype of a Shadow Self.

She manifests as a monstrous, multi-limbed lump of flesh with Maki's head poking out of the main body, although after this form is defeated it is revealed to be a cocoon for her true form, which appears as a giant version of Maki with butterfly wings and antennae.

Pandora is a member of the Tyrant Order in Megami Ibunroku Persona, but her Order was changed to Deity in both the Japanese and English versions of Shin Megami Tensei: Persona.

"Can you wield that strength? Dare you unleash catastrophe upon this world? Can you cling to the paltry hope that remains? Is the puppet ready to cut her own strings? Shall the doll seize her own destiny? Then you need only call my name. I am thou, thou art I. My name is... (PANDORA!)"
—Pandora, Persona 5 Strikers

Pandora is the true form of Sophia's Persona. Once snapping out of Ichinose's control and recovering from her fatigue, Sophia dashes out to block Ichinose's ray cannon before trying to convince her that the heart is important to assessing humanity. Once Ichinose was reminded of her past how people dissed her because of her abnormal behavior which led her to create Sophia only to ditch her quickly because she asked her what is a heart (Something that pushed her button), she attempts to brainwash Sophia to no avail until Sophie awakens, writhing in pain as her face displays the words "PANDORA." All four Pithos merge into one, revealing their true form, Pandora, within them. Sophia vows to fight Ichinose with the party, who was now severely and desperately in denial. Ichinose then summons a Hecatoncheir to fight the party as a last ditch attempt to kill the Thieves, only to fail and be convinced to actually turn on the Phantom Thieves' side.

Pandora is one of the two Personas in Strikers naturally able to learn Makougaon, which is learned right before Pandora's first battle. The other such Persona is Metatron, who is not available before post-game. Once the battle is over, Pandora gains 5 additional skills beyond what Pithos had provided, akin to the ultimate Personas of S.E.E.S., and her moveset can be changed to fit the player's preference afterwards should Sophie be overleveled.

During New Game Plus, Sophia will be within the party's default roster and starts with Pandora.

"A curious maiden who unsealed a jar, releasing evil and leaving only hope."
—Demonary, DemiKids

Pandora is a demon hidden near the Valhalla entrance to the Time Tower and can be recruited using a password. She has the power Fog, which makes dodging attacks easier.

Pandora's main offensive element in both of her forms is ice, therefore it's recommended that no party member has a Persona that is weak to it. An alternative is using the Water Wall skill from either Varuna (level 47), Otohime (level 50), or Lakshmi (level 70), which will make the entire party absorb ice damage for three turns.

Pandora is weak to the Hieroglyphein spell in all of her forms, making it an excellent way of dealing damage. There are only three Personas in the game that learn this skill: Amen-Ra (level 62), Skuld (level 88), and Vohu Manah (level 94). Out of the three, only Amen-Ra is viable without excessive and unnecessary amounts of grinding from the player's part.

This form is only able to move once per turn and has multiple ways of inflicting status ailments on the party: freeze (Bufudyne), stone (Petrama), and paralyze (Evil Smile and Paralyze Puncture). Most of those ailments can be dealt with by being immune to the element of the skill that inflicts it, except for Paralyze Puncture. Paralyze Puncture is a non-elemental skill and thus will hit any Persona for neutral damage regardless of resistance, though it's still considered magic and thus can be reflected by the Makarakarn skill or the Magical Guard item. The only three Personas that can learn Makarakarn are: Succubus (level 53), Yamaoka (level 60), and Fuhedi Mergane (level 74). While there are skills to remove those ailments, it's recommended to rely on items for this fight instead of a skill, as the player runs the risk of Pandora shutting down their only character with ailment recovery skills with Paralyze Puncture.

Defensively, this form is weak to guns and vulnerable to axes. It's recommended to defeat her using guns as to save SP for the next form.

This form can move twice per turn and will alternate between being resisting magic and being weak to physical (red hair) and vice-versa (blue hair). Changing her hair color/resistances will consume one of Pandora's turns.

Like her cocoon form, red-haired Pandora can inflict a multitude of ailments via her skills. Freeze from Mabufudyne and charm from Marin Karin can be dealt with by being immune to ice and nerve, respectively, but her Butterfly Storm is non-elemental and incredibly powerful, having the ability to inflict any kind of negative status ailment randomly. Butterfly Storm can be dealt with in the same fashion as the first form's Paralyze Puncture, and all warnings about ailment recovery still apply. Pandora can make one party member unable to switch Personas using Desanga, but that is a minor inconvenience unless the player's strategy to beat this boss requires changing Personas frequently, which is not recommended as it costs a turn anyway. Alternatively, red-haired Pandora can make one party member unable to be healed for three turns with Decover, which can be potentially deadly if used on a party member that isn't immune to nerve.

Pandora's blue-haired form has more of a support role compared to her counterpart. She lacks offensive skills and will instead try to either debuff the party's physical attack, buff her defense, get rid of the party's buffs, heal herself, or use Symphony of Lament to try and inflict the party with the Guilty ailment. As Symphony of Lament is a non-elemental spell, the same warnings from Paralyze Puncture and Butterfly Storm apply, including ways of dealing with it. Alternatively, Pandora can use All Guard on herself to become immune to all damage until the end of the turn.

In this fight, it's recommended to keep a physical-oriented offense, regardless of Pandora's hair color. That's because Pandora can sometimes change her hair color to blue, baiting the party into attacking her with magic only to immediately revert to red hair on the following turn and absorb all of it. Arrow and throw skills are recommended for this, as they are incredibly powerful and hit multiple times, being able to make quick work of Pandora. Usas' (level 53) Myriad Arrows and Ishtar's (level 65) Arrow Volley are recommended. Should the player be able to fuse him, Kamakura Gongorou (level 61) and his Sonic Bullet should be able to do massive amounts of damage. 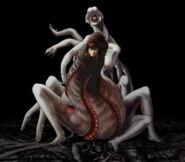 Pandora as she appears in Megami Ibunroku Persona 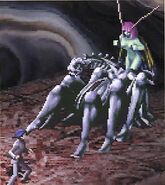 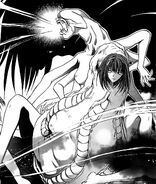 Ruby Kurosawa in her Pandora outfit