Doug Erholtz
"A world heading towards death, and a world steeped in death. How canst thy life shine so brilliantly amidst it? Show me... thou blue knight filled to th'brim with death...!"
—Pale Rider, Shin Megami Tensei: Strange Journey

Pale Rider, also written as Pale Knight, is a demon in the series.

"When the Lamb broke the fourth seal, I heard the voice of the fourth living creature saying, “Come.” I looked, and behold, an ashen horse; and he who sat on it had the name Death; and Hades was following with him. Authority was given to them over a fourth of the earth, to kill with sword and with famine and with pestilence and by the wild beasts of the earth."
—Revelation 6:7-8.

The Pale Rider, or Pale Horseman, is the fourth and final Horseman of the Apocalypse, according to Christian scripture. The rider traditionally represents death and bears a scythe of death. Despite typically being portrayed carrying a scythe as his weapon (much like the Grim Reaper), in the Book of Revelation, he is described as bringing Hades (Hell) wherever he rides as his symbol. His color being pale, as opposed to an actual color, could be reflecting the sickly appearance of a corpse (though old translations could be interpreted as the rider being pale green and yellowish green.)

Unlike the other three Horsemen, Death has also been specifically mentioned in texts surrounding the Day of Judgement where God himself takes both Hades and Death, alongside the Devil and all his followers and places them in the Lake of Fire for all of eternity.

"Origin: Middle East. One of the 4 Horsemen of the Apocalypse. He is Death incarnate, riding a pale horse. Some sources say the Four Horsemen will kill 1/4 of the world's population."
—Shin Megami Tensei A-Mode DDS dictionary

The Pale Rider is one of three rare and difficult fiend bosses that can be found hidden throughout the game. If the protagonist beats him, he has a slim chance of dropping the Angel's Trumpet, the most powerful Law-aligned weapon in the game.

"One of the four horsemen of the apocalypse. He rides on a pale horse, and hades follows behind it."
—Shin Megami Tensei III: Nocturne compendium

Pale Rider appears as the summon orb boss of Shibuya's Celu Tower silver-level instance. He also appears as a boss within the Chain of Curse Deep Docks instance and a boss of the TR-Route of Denshi Kairo, through which the ability to fuse him can be obtained. He is a special triple fusion of Black Rider, Loa and Bishamonten.

"So... a son of man hath called me from one underworld to another... I am the Pale Rider, one of the Four Horsemen. The end times approacheth..."
—When summoned through fusion

Pale Rider returns as a Fiend demon, however, before he can be summoned he must be engaged in combat in Sector Grus and defeated. Fusing Pale Rider with the other three Riders in a special fusion will result in Mother Harlot.

Pale Rider has a 1/256 chance appearing in Minami Sunamachi, on the western edge of the eastmost pair of buildings, just south of the line that runs down the center lane (see below). His Almighty-spam mode is set by Force resistance. The reward for defeating him is a large amount of experience points, 3 Heavy Grimoires and the ability to create him in a special fusion.

Pale Rider is fought alongside the other three in the Challenge Quest, Errand for the Apocalypse. Belial has sealed the four in a Domain found in Infernal Tokyo's Ikebukuro. They are weaker than when they are encountered normally. If Flynn makes any attempt to challenge them before accepting the quest, the Fiends will eject him from the domain. Completing the quest grants Flynn the Peacemaker, which is only surpassed by the plasma gun in terms of raw power. 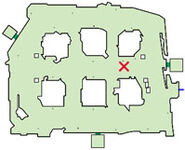 Pale Rider, along with all the other Fiends, is encountered in Twisted Tokyo. Pale Rider is encountered on B27F and drops the Reaping Blade in the second cycle onwards. He is fought at level 970 on cycle nine.

Pale Rider's strategy is focused on Force attacks and inflicting ailments to boost the strength of his Pestilence attack. For the former, the Lost status can quickly become a nuisance, especially if it happens to those normally immune to that ailment due to Will of Wind. For the latter, all the ailments he attempts to inflict to the party are Nerve ailments, so a simple Null Nerve can quickly drain his Press Turns.

Pale Rider, along with the other Fiends that held Menorahs and the Demi-fiend, are set to appear as part of the Return of the True Demon DLC pack. As before, defeating Pale Rider unlocks the ability to fuse him.

The Persona can fuse Mithra and Ares to get Pale Rider. Although, before the protagonist can fuse them, they must complete Elizabeth's Request to fuse Valkyrie with Tarukaja. Then, she will award the protagonist with the Torn Black Cloth item, which is required for the fusion of Pale Rider.

Pale Rider appears as a Persona of the Jester/Hunger Arcana, and thus can only be obtained through fusion in the Velvet Room.

"One of the Four Horseman of the Apocalypse, he rides a pale horse and represents death. He has the power to destroy life."
—Persona 5 background

Pale Rider's special fusion recipe consists of the Red, White, and Black Riders. This special fusion is unlocked after obtaining the 4 Knight Crest key item from the Depths of the Theater District. 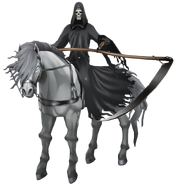