Ouyamatsumi is a demon in the series.

Ouyamatsumi, also known as Ohoyamatsumi, is a strong Kunitsukami of the Shinto religion, being the god of Mount Fuji. He creates the ice and the snow at the tip tops of the mountains and he is the leader of elevation. He is the grandfather of Kushinada-Hime, Susano-o's wife.

He has many different looks, one of which is a man sitting on a golden chair in the top of a mountain. He rocks it back and forth gently to create the flecks of snow that slowly fall down. He wears a long golden threaded men's kimono. Another depiction of him, is a rock creature of large proportions that thumps the grounds of the mountain, creating stormy weathers. He is kind-natured over humans and his personality is full of blessed fortune.

Oyamatsumi, a great mountain named after him found in the Zocho Heights, is said to be his earthly embodiment. This mountain has been blessed for many centuries, especially during the Heian era when travelers would pray and bow down before the mountain to wish them good luck and fortune on their foreboding journey.

He also controls the fields for harvest, blessing humans with good rice crops and creating softer tides to stop tsunamis from approaching. Although he had a great influence, his accomplishments have been forgotten in the old text he was written in. He has been a great blessing for people of Japan in his texts, as he created the lush beauty of the mountains and brought them good luck.

Ouyamatsumi was first introduced during the Masakado Manifestation event, appearing as the first boss leading up to Masakado's burial mound. Defeating him prior to defeating the mobs surrounding him inflicted a powerful debuff reducing all party member's stats by 75%.

"One of the Kunitsukami's sic in Japanese mythology. He is the grandfather of Susano-o's wife, Kushinada-Hime.
He is known as the god of the mountains but is also considered to be the god of water and rice fields because he ruled over water sources and harvests."
—Shin Megami Tensei V lore

Oyamatsumi appears in Shiba, towering over the landscape. Aogami believes him to be a survivor of the battle between God and the demons 18 years ago. Oyamatsumi stands in the protagonist's way on his journey to Tokyo Tower, but Aogami recommends avoiding a confrontation. Oyamatsumi is the first punishing foe encountered, with stats much greater than any demon faced so far. He will immediately become hostile when approached within a certain radius and pursue the protagonist, including from directly behind him. If the protagonist manages to defeat him, they will obtain the Kunitsu Keystone.

He is the target in the quest "The Search for Ouyamatsumi", in which his fellow Kunitsu were looking for him. He had lost control of himself and was possessed by a "vile" spirit, but after being killed by the protagonist, they bring back the keystone and he is revived by Take-Minakata to his normal state. He will fight alongside his fellow Kunitsu to test the protagonist's strength; after being defeated, he tells them that they are more than what Bethel deserves and would welcome them with open arms if they decided to join the Kunitsu.

"Japanese god of the Kunitsu. He is the grandfather of Kushinada-Hime, Susano-o's wife. Known best as a mountain god, but also a god of water and the fields due to his control over them."
—Devil Summoner: Raidou Kuzunoha vs. The Soulless Army devil chart

Ouyamatsumi begins appearing as a random encounter in Episode 10 while Raidou re-enters the Shipbuilding Facility.

Ouyamatsumi as it appears in Card Summoner 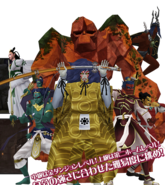 Ouyamatsumi with the other bosses of Masakado Manifestation in IMAGINE

Ouyamatsumi in Devil Summoner: Raidou Kuzunoha vs. The Soulless Army