Ose is a demon in the series.

Ose, also known as Osé, Oze, Oso or Voso, is the 57th demonic spirit of the Ars Goetia and a great president of Hell. He first appears as a leopard, but after some time will take the form of a man. He gives skill in all liberal sciences and true answers concerning divine and secret things. He can change any men into any shape the exorcist may desire, and the one that is changed will not know it.

He can also put them in a state of insanity in which the victim will believe that their identity has changed. The delusion, however, will only last for an hour. Ose governs over 30 legions of spirits.

His name seems to derive from Latin "os," mouth, language, or "osor," that who abhors.

"Origin: Israel. One of the 72 demons of the Goetia. He is a President of Hell. He has a giant panther head and can change a person's appearance without them noticing. He can also inflict various delusions and fantasies upon people. In addition, he can make his summoner into an outstanding scholar."
—Shin Megami Tensei A-Mode DDS dictionary

Ose appears after the summoning ritual involving Saki is completed, his body towers over many buildings and he does not speak. He proceeds to fight Masakado and Cerberus, but is being easily beaten by them. In order to counter this, Gagyson offers his life to his master, which gives Ose wings, tusks and birdlike feet. Despite this, he was still losing until Masakado let his guard down, after catching Masakado in his hand, Ose's lost arm regenerates thanks to his unlimited supply of magnetite coming from Saki. Once he loses his unlimited supply of magnetite, Masakados finishes him off in one blow.

Ose appears in the Assembly of Nihilo as a boss and drops the Anathema Magatama after the Demi-fiend defeats him. An all white version of Ose appears next to Baal Avatar. This Ose is Ose Hallel, who aids Baal Avatar along with Flauros Hallel.

Ose can only be acquired through fusion and appears as a boss in one of the final acts and as support for many of the bosses following his act; in particular he appears alongside Flauros in the Distortion boss room. In Act 18, he faces off against Andras, Azura and the player character, summoning Berith and Orobas to aid him. After losing he is disappearing as his two allies have already vanished. He uses the last bit of his strength to strike down Andras, only for Azura to take the blow meant for him, vanishing afterwards.

During the Basilica activation quest, the player encounters Ose Hallel when it kills a Demon Buster in front of them, scoffing that humans are weak no matter which world they belong to. After the fight, he leaves, but reappears to confront the player and Azura in Nakano, where he is fought off by DB Kuroe. He appears alongside Flauros Hallel as the third boss fight in End of Days Ichigaya. After obtaining his plug-in, players are able to fuse this variant in a special double-fusion of Ose and Throne.

"One of the 72 demons of the Goetia, he is known as the President of Hell. He can shift his shape from leopard to human, and reveals the truth behind divine mysteries."
—Shin Megami Tensei: Strange Journey compendium

Ose appears as a common enemy in Sector Fornax's basements.

Ose is summoned by the Terminal Guardian at the third terminal to defeat the prentice Samurai. His defeat leads the terminal to return to normal. He will also be summoned by G.H. Hills in the final round of the "Hunter Tournament Finals" Challenge Quest. Afterward, Ose can be found as a normal encounter in Ginza. He can teach Flynn the Blight, Dekunda and Javelin Rain skills through his Demon Whisper.

Ose will be one of the demons in Tsukiji Hongwanji during the entry test. Attempting to communicate with him here will result in him blowing on the candle.

Ose initially appears in Kanda-no-yashiro, guarding a crest which unlocks the seal which holds Krishna prisoner. Nanashi must defeat him in order to obtain the crest needed to proceed further into Kanda-no-yashiro's depths.

Ose will later appear as a regular enemy in Shibuya. He can teach the Blight, Critical Wave and Javelin Rain skills through his Demon Whisper. Ose benefits from learning Physical attack skills.

"One of the 72 demons of the Goetia.
Appearing as half-man and half-beast, it is said that he can change his form according to the desires of the one who summons him, though not for very long."
—Shin Megami Tensei V lore

Ose is fought in the underworld and drops the Sword of Kusanagi after his defeat.

"One of the 72 demons of the Goetia, known as the President of Hell. He can shift his shape from leopard to human, and reveals the truth behind divine mysteries."
—Persona 3 compendium

"One of the 72 demons of the Goetia, he is known as the President of Hell. He can shapeshift from leopard to human and reveal the truth behind divine mysteries."
—Persona 5 background

Ose is the sixth Persona of the Fool Arcana and can be found in Niijima's Palace and the Sheriruth area of Mementos with the title, "Cruel Leopard." He is the first Persona to learn the Heat Wave Physical skill. Itemizing Ose with Electric Chair execution yields the Matarukaja skill card.

The Shadow of Yoshikuni Nejima takes the form of Ose when the party encounters him in Mementos during the "Winners Don't Use Cheats" request. He can be found on the 5th path of Akzeriyyuth. Due to his cheating in the real-world games making him impossible to hit, the Phantom Thieves will likewise be unable to strike him during the battle. After a few turns, the initial battle ends with the party retreating. In order to deal with Shadow Nejima, the protagonist must seek out information on a skilled game player, Shinya Oda. After learning some tips from Shinya, the protagonist will be able to land a hit with his gun the next time Shadow Nejima is encountered through the use of a special shot. The battle then ends with an all-out attack from the Phantom Thieves.

Ose will now appear during the introductory sequence, alongside Jatayu.

Itemizing Ose with Electric Chair execution yields a Counterstrike skill card. During a fusion alarm, he will instead yield a High Counter skill card. This can be used to complete the final rank of the Strength Confidant by applying it to Seth.

"A very vicious demon that resembles a leopard. Its claws can slice anything."
—Demonary, DemiKids

Known as Ozemos, he appears as a boss guarding one of the doors in the final dungeon, Dark Castle Tyrnanog. Stating that Jin's quest to defeat the Imperium will end here. After his defeat he is impressed by Jin and states that Imperius waits ahead.

Ose is one of the three commanding officers of Remiel. After fellow officer Crocell is defeated, he takes action in going against the Devil Children, sending Raphael to act as a spy while sending other servants like Poseidon and Ameretat to take them down. He later invites the group into his castle by letting them believe he is giving them the tool they need to defeat his master, only to challenge Jin and Akira to battle. Once Jin proves he has what it takes to defeat Remiel, he gives him the item. The last officer Gemori appears before them and tries to kill both him and Jin, with Ose protecting Jin and dying in the process.

The second boss faced by Rand, Ose is found in the village stage. He uses lightning to strike down a vertical row.

"One of the 72 demons of the Goetia. He has the power to reveal truths and fill his summoner's enemies with blind rage. Ose can also change a person to their desired look, but as a consequence that person will not realize the transformation took place."
—Shin Megami Tensei: Liberation Dx2 compendium, Ose

"Ose, who was once one of the Fallen, with his angelic power restored by God.
He is ranked as one of the Seraph, a type of angel placed as the highest in the nine ranks of the angel hierarchy by Pseudo-Dionysius the Areopagite. The fallen angel Ose is said to have the ability to make people believe that they are the king or pope, but only for an hour a day.
One theory is that Ose is the corrupt form of Odin after being incorporated into Christianity." 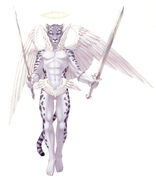 Ose as he appears in Shin Megami Tensei III: Nocturne

Ose Hallel as he appears in Shin Megami Tensei IMAGINE 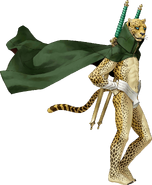 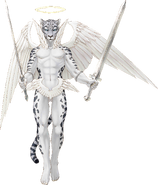 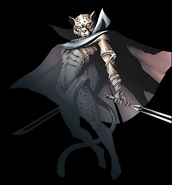 Ose as he appears in Persona 3 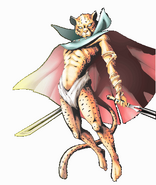 Ose as he appears in Persona 4

Ose as he appears in DemiKids

Ose as he appears in Last Bible III

Ose as he appears in Devil Children Puzzle de Call!

Ose as he appears in Tokyo Revelation

Ose as he appears in Persona 5 Royal 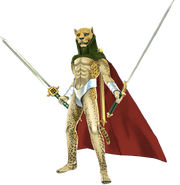 Ose as he appears in Persona O.A. 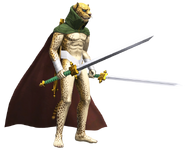 Ose as he appears in Shin Megami Tensei: Liberation Dx2 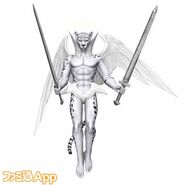