Orc is a demon in the series.

In many fantasy works, such as those of J. R. R. Tolkien, orcs are very ugly humanoid creatures that are fierce and warlike. Though the earliest mentions of orcs dates back to the 9th century, poem, Beowulf, the term orc was popularized from Tolkien's writings and they are depicted as monstrous soldiers of the enemy. Their name is said to come from the Roman chthonic god Orcus.

In the Shin Megami Tensei, orcs have a pig head, this may relate to the god Orcus association with pigs or from an illustration in the first edition of Dungeons and Dragons.

"Origin: Italy. Pig-headed demons that serve Orcus. These demi-humans of the Expanse are very close to humans. They think of nothing but their appetites and sexual desires. They often attack human settlements for food and women."
—Shin Megami Tensei A-Mode DDS Dictionary

An Orc can be seen in a lab in Shinjuku, greeting the Protagonist & his friends, mistaking them for demons in a human disguise. He then realizes that they are actually humans and fights them. Another Orc can be encountered, saying "Where did you come from!?" 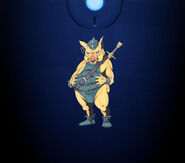 Orc as it appears in Last Bible II

Orc as it appears in Last Bible Special
Community content is available under CC-BY-SA unless otherwise noted.
Advertisement