Onmoraki is a demon in the series.

An Onmoraki is a bird-demon created from the spirits of freshly-dead corpses that appears in Shinto mythology. They resemble a black crane, and if a person is caught sleeping in a temple's sermon hall, the Onmoraki will rebuke them while flapping its wings. Onmoraki are also said to shout the Degeneration Sutra in the household altar of priests who neglect to read their sutras.

In modern Japanese art, the Onmoraki will often take on the comical appearance of a roasted chicken. This is most likely due to the works of a eighteenth century artist, Toriyama Sekien.

"A type of specter found in Japanese legends. Onmoraki are former humans whose spirits have been transformed by hatred because they did not undergo rites of purification after they died. They appear as cranes with human heads and forked tongues. They shake their feathers and wail in high-pitched human voices.
The greatest desire of the Onmoraki is to undergo purification rites, and they are said to appear in Buddhist temples. They are also known to appear to monks who are lax in reciting their sutras."
—Shin Megami Tensei IMAGINE compendium

One of the final tests of the Virtual Battle training quests is to kill an Onmoraki. Onmoraki can be contracted with at night time on Suginami field and in both bronze and silver instances of Suginami Tunnels. Stronger variants can be fought against in the higher levels of Shibuya's Quartz instance.

"A Japanese bird that takes the form of a bird with the face of a man and a sickening chirp. It can also spit fire. It's true identity is a corpse that has not had a proper memorial service. It is said to appear before monks who neglect their duties."
—Shin Megami Tensei: Strange Journey compendium

"A Japanese monster that takes the form of a bird with the face of a man and a sickening chirp. It can also spit fire. Its true identity is a corpse that has not had a proper memorial service. It is said to appear before monks who neglect their duties."
—Shin Megami Tensei IV: Apocalypse compendium

Onmoraki may be found in the Kinshicho south exit shopping district early in the game and later in the Shinjuku West Entrance Park. It is one of the initial sources of the Agi skill.

"A monstrous, fire spitting, Japanese bird with a man's face. It is actually a corpse that was not given a proper memorial service. They appear before monks who neglect their duties."
—Persona 5 background

Onmoraki also appears as a summoned boss in the request "Phantom Thieves VS Burglary Ring".

Onmoraki is a boss in Fire Book, where he guards the gate on top of the Angels Tower that leads to Time's Edge. When Jin attempts to pass Onmoraki stops him and attacks, informing him of how the children will take part in the holy battle. Upon defeat he mentions he should go to Makai, dying afterwards. Onmoraki is one of the demons given as a prize for beating Eligor's quiz in Ice Book.

Onmoraki as it appears in Card Summoner

Onmoraki as it appears in Shin Megami Tensei IMAGINE

Onmoraki as it appears in Shin Megami Tensei IV -Prayers- 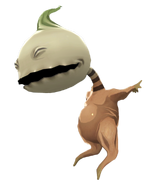 Onmoraki in Persona O.A.
Add a photo to this gallery
Retrieved from "https://megamitensei.fandom.com/wiki/Onmoraki?oldid=419980"
Community content is available under CC-BY-SA unless otherwise noted.