Lavenza
"There are things you can only learn about a person in combat. But even if you understand each other... in the end, only one can remain. Now, show me what kind of man you are."
—Oni, Shin Megami Tensei: Strange Journey

Oni is a demon in the series.

Oni (鬼) are creatures from Japanese folklore, variously translated as demons, devils, ogres or trolls. They are popular characters in Japanese art, literature and theater. Oni are known for attacking villages and plundering food, riches and women.

"A common demon in Japanese mythology. A powerful red creature with a horn on its head that attacks villages with its iron club and plunders food, riches and women."
—Shin Megami Tensei III: Nocturne compendium

Oni are the main force of the Mantra Army, as several are seen populating both Ikebukuro and the Mantra Headquarters. After the Demi-fiend first meets with Gozu-Tennoh, they can be encountered in Ginza but will clear out after reaching the true core of the Assembly of Nihilo's Shiodome base.

Aside from the regular Oni, there were also four Oni with special powers, Ongyo-Ki, Fuu-Ki, Sui-Ki and Kin-Ki, who were once the Mantra's elite, before somehow falling out with the army's commander, Thor. They were cast out of the Mantra Army and were left to become bandits in the tunnels leading to Asakusa.

"Monstrous creatures of Japanese mythology. Some of them, such as Shuten-doji, are well-known throughout Japan, and it is common for "-doji" to be added to the names of famous Oni. Their entire bodies are built as tough as iron, they have horns on their heads and sharp fangs protrude from their mouths. Their thick, sharp claws can easily tear through tempered steel. They wear lionclothes of tiger skin and carry metal clubs studded with spikes. The number of horns and the color of their skin varies from Oni to Oni.
The appearance of the Oni was established during the Heian period (794-1185). Because the so-called Oni Gate faces northeast, between the directions of the ox (NNE) and the tiger (ENE), the Oni was conceived as having the horns of a ox and the fangs and claws of a tiger. The animals who protected the Japanese folk hero Momotaro from the Oni were derived from the opposing directions: the monkey (WSW), the cock (W), and the dog (WNW).
The prison guards of Hell who command the Oni are known as Mezuki and Gozuki."

Oni can be contracted in Ueno and Ikebukuro during the in-game daytime hours. It appears as the final boss of Act 7 following a player's DB License test. He appears as an enemy in Ikebukuro as a demon contracted by punks, as a summon by the four oni bosses in Shinjuku, one of the invading forces in Shinagawa during the weekend invasion periods and the boss of the Suginami camp hacked chip instance. A non-playable Oni plays a central role in some limited events, such as Setsubun-themed events, summer beach events and a Valentine's event where he shows some interest in Moh Shuuvu.

"An evil monster of Japanese lore known for its hideous visage and brute strength. They plunder and loot villages, massacring the townspeople with their iron clubs. They have a horn on their heads, red skin, and razor-sharp teeth."
—Shin Megami Tensei: Strange Journey compendium

"An evil monster in Japanese lore known for its hideous visage and brute strength. They plunder and loot villages, massacring the townspeople with their iron clubs.
They have a horn on their heads, red skin, long claws, and razor-sharp teeth."
—Shin Megami Tensei IV profile

Oni can be found in Ueno. He can teach Flynn the Critical Wave, Taunt and Fang Breaker skills through his Demon Whisper.

Oni also makes an appearance in the "Training Battle 3" Challenge Quest alongside Dantalian. Using Blight on the duo will poison them, but this must be done before they have a chance to use Tetrakarn. Swapping in Zhen to use Pandemic Bomb will also lower the pair's damage output.

Oni, alongside Fuu-Ki, is one of the first demons to attack Walter when he arrives in Tokyo. The Black Samurai is able to defeat both before they could finish Walter and a Casualry.

Oni appears in all areas of Ueno. He will be accompanied by Leanan Sidhe in Ueno's initial areas and later appear alongside Sandman in the Shinobazu Pond area. He can pass along the Head Crush and Critical Wave skills during their whisper event.

An oni living in a cave in Nagatacho wants to be "helpful" to other demons around so he can be revered as the local boss. He asks the protagonist to look for any demons outside of his cave who need his help. However, the demons around either do not need any assistance or had terrible experiences when they asked that oni for help. When that oni learns that no one needs him at all, he rushes out his cave and intends to assault the demons outside out of frustration. The protagonist just beats him and stops him in time. He feels humiliated after his defeat and retreats back to his cave. When the protagonist approaches him again, he admits that he is relatively weak among his rank.

"An evil monster of Japanese lore known for its hideous appearance and brute strength. They loot and plunder villages, and massacre the townspeople with their iron clubs."
—Devil Summoner: Raidou Kuzunoha vs. The Soulless Army devil chart

Oni appears in the Matrix Labyrinth inside of the Daidouji Factory as a random encounter.

"An evil monster of Japanese lore known for its hideous appearance and brute strength. They loot and plunder villages, and massacre the townspeople with their iron clubs."
—Gouma-Den devil chart

Oni is needed to perform a cross fusion along with Fuu-Ki, Sui-Ki and Kin-Ki, in order to create the Ultimate Persona of the Hermit Arcana, Ongyo-Ki.

"An evil monster from Japanese lore known for its hideous appearance and brute strength. They loot and plunder villages, massacring the townspeople with their iron clubs."
—Persona 5 background

Oni is the third Persona of the Strength Arcana and can be found as a Shadows in Kaneshiro's Palace and in the Kaitul area of Mementos, with the title "Chivalrous Fiend." It is one of four Personas to learn the Snap skill. When itemized through Electric Chair execution in the Velvet Room, Oni yields a Rampage Skill Card .

"Though fearsome to behold, this powerful demon is actually very kind and sensitive."
—Demonary, DemiKids

"And evil monster of Japanese lore known to plunder and massacre villages with their massive iron clubs. They have horns on their heads, long claws, and razor-sharp teeth. They are usually a red or blue color appearing in countless tales."
—Shin Megami Tensei: Liberation Dx2 compendium

Oni in Devil Summoner: Raidou Kuzunoha vs. The Soulless Army

Oni as it appears in Shin Megami Tensei IV -Prayers- 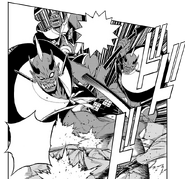 Oni as it appears in Devil Summoner: Raidou Kuzunoha vs. The Lone Marebito