Ongyo-ki is a demon in the series.

Ongyoki (隠形鬼) whose name means "Invisible Oni" was controlled by Fujiwara no Chikata (藤原千方) from the mid-Heian period. He suppressed its aura to prevent enemies from sensing him, allowing him to surprise enemies when he attacked. It has been allegedly said that this is the origin of ninjitsu.

"One of the four oni Chikata Fujiwara was said to have controlled during the Heian period of Japan. He had the power to disappear and make images of himself, making people believe this is the origin of ninjitsu."
—Shin Megami Tensei III: Nocturne compendium

Ongyo-Ki is the leader of the four Oni that were part of the Mantra demons' elite force. But they made a mistake which angered Thor, and they were forever banished from Ikebukuro. The once elite Oni group became mere petty thieves who mugged anyone going through their scattered hideouts around the Ikebukuro Tunnel.

Ongyo-Ki's hideout is within the central area of the Ikebukuro Tunnel close to the ladder that leads to the station near Asakusa. However, he will not appear until his 3 subordinates have been defeated. If the Demi-fiend manages to meet up with him, Ongyo-Ki will ask if he is the one who murdered the former's comrades. Either option results in Ongyo-Ki challenging him to a duel.

Ongyo-Ki has a special ability to replicate himself. If any of the replicas are hit, he will retaliate with a powerful attack. The only way to see through the illusions is to battle him during a Full Kagutsuchi phase. With the light of Kagutsuchi reaching even in the darkest recesses of the tunnel, the real Ongyo-Ki's shadow can be seen on the surface, negating his tricks and making him vulnerable.

When the Demi-fiend reaches level 81, he can fuse Ongyo-Ki in the Cathedral of Shadows via a sacrificial fusion involving Fuu-Ki, Sui-Ki and Kin-Ki.

Ongyo-ki can be summoned as a field boss on Shinjuku field after obtaining three different lacquers from the other oni bosses. He has a rare chance of dropping a shadow fragment that can be turned in to the White-Haired Young Man NPC in front of Old Ichigaya Camp's B108 boss room along with an Oni that knows all four null element skills. By doing this, players are able to obtain the ability to fuse Ongyo-Ki. By obtaining multiple fragments, players can perform a synthesis recipe to create a special set of equipment that allows them to use a skill that erases their presence for a short period during the in-game night.

Ongyo-ki is again created through special fusion using Fuu-Ki, Kin-Ki and Sui-Ki. He is the only source for the skill "Repel Gun" until Kartikeya can be unlocked in a New Game Plus quest.

He is a Challenge Quest Boss in [Tgt] Minami Sunamachi Demon. Ongyo-Ki can teach Nanashi the Tetanus Cut, Dark Sword, Mist Rush and Death's Door skills through its Demon Whisper. It benefits from learning Physical attack and ailment skills.

"One of the four oni controlled by Fujiwara no Chikata, who ruled Iga and Ise during the Heian Period.
By suppressing its aura, thereby preventing others from sensing its presence, it can effectively ambush its enemies. Oni have been said to act as liaisons between humans and gods, and the Fudoki holds many records of such exchanges in this region."
—Shin Megami Tensei V lore

Ongyo-Ki can be found as a common enemy in the Temple of Eternity.

"One of the four oni controlled by Fujiwara no Chikata. By eliminating its aura and preventing others from sensing its presence, it was able to surprise enemies."
—Persona 4 compendium

Ongyo-ki can only be obtained by maxing out the Hermit Social Link and performing a Cross-Spread fusion consisting of the Oni, Fuu-Ki, Kin-Ki and Sui-Ki Personas.

"One of the four oni controlled by Fujiwara no Chikata. By eliminating its aura and preventing others from sensing its presence, it is able to surprise its enemies."
—Persona 5 background

Ongyo-Ki is the ultimate Persona of the Hermit Arcana and can be summoned in the Velvet Room through an advanced fusion of Kin-Ki, Sui-Ki and Fuu-Ki. Ongyo-Ki is the first of two Personas to learn Agneyastra and Arms Master and one of three to learn Firm Stance. When itemized through Electric Chair execution, Ongyo-Ki yields a Myriad Slashes skill card.

The Cleaner's Shadow Anomaly in Shido's Palace takes the form of Ongyo-Ki when confronted in the engine room.

Ongyo-Ki rarely appears in encounters once the party has reached 4100ft up the Karma Temple.

"One of the four oni controlled by Fujiwara no Chikata during the Heian period.
By eliminating its aura and stopping others from sensing its presence, it is able to surprise its enemies."
—Devil Survivor 2 Record Breaker compendium

Ongyo-Ki appears as one of the downloadable demons in the game. It can only be fused using Bishamonten and Shiki-Ouji. It is now the strongest member of the Touki race, a status previously held by Oumitsunu.

"One of the four oni controlled by Fujiwara no Chikata in the Heian period. It is extremely adept at hiding its presence, striking enemies from the shadows. The Ninjas were modeled after this demon."
—Shin Megami Tensei: Liberation Dx2 compendium

Ongyo-ki as he appears in Persona Q: Shadow of the Labyrinth. 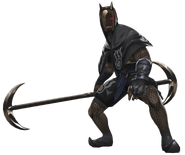 Ongyo-Ki in Persona O.A. (no background)