Hierophant
"Thinking about it, much time has passed since I governed over knowledge. Those who repay their debt to this country with knowledge shall gain form, becoming a ghost of national defense. If you are still a fool even after gaining knowledge, then you will learn the meaning of death."
—Omoikane, Shin Megami Tensei IV

Omoikane is a recurring demon in the series.

Omoikane is a Shinto god of wisdom and intelligence. His name means "serving one's thoughts." A heavenly deity, identified as a child of Takami-Musubi, who is always called upon to "ponder" and give good counsel in the deliberations of the heavenly deities. He appears to have descended from the heavens in the heavenly descent myth. Omoikane was a deity of wisdom or good counsel able to hold many thoughts at once or to combine in one mind the mental powers of many individuals.

Omoikane is a boss summoned by Baal to guard the entrance of the elevator that goes to the last floor of the arena. He is the only boss who can be inflicted with the "Undead" ailment, which will reduce his HP to 0. If the protagonist kills him in that way, Omoikane will drop Masakado's Sword, the strongest weapon in the game.

"One of the "Eight Million" of Japanese mythology, the son of Takamimusubi. He is known as the god of knowledge.
Omoikane is famous as the one chosen by the gods to develop a plan to lure Amaterasu out of hiding in Amanoiwato after she was driven there by Susano'o.
He is still enshrined today at the Chichibu and Togakushi Shrines as the god of knowledge, learning, and exam-taking."
—Shin Megami Tensei IMAGINE compendium

Omoikane appears first as a miniboss in both bronze and silver instances of Celu Tower in Shibuya. He also appears during the Chain of Curse series of acts to inflict a curse that players can only remove by defeating a crazed Take-Mikazuchi in Shibuya's Metro instance.

He is an important part in the process of summoning Amaterasu as a boss in Kagurazaka's Zhu Que Caverns' gold instance.

"The wise Japanese God who served as the elder figure of the Amatsu gods, Omoikane no Kami. He is the deification of thought. His name means "to combine thought," and just as it implies, he has the wisdom of many people. When Amaterasu locked herself in the cave of Amato-Iwato, he conceived the plan of having Ame no Uzume dance while other gods played music, stirring Amaterasu's curiosity."
—Shin Megami Tensei IV compendium

Omoikane is The Wise General of the National Defense Divinities under Tayama's control and one of two tasked to protect the Yamato Perpetual Reactor in Camp Ichigaya by creating a barrier. On Walter's route, he is faced in a Domain within a room on the southeast side of Camp Ichigaya's B2F, where he introduces himself to the two Samurai. He tells them he will not let them go any further and attacks. During the battle, if left in a critical condition, Omoikane will use Diarahan to fully heal himself. As he dies he proclaims that knowledge is meant for the happiness of the people and asks how they will guide the country before crumbling.

To unlock him for fusion, Flynn must examine the stone that is his defeated remains with the key item, "Yagokoro's Brain," in his possession. His medium, along with the mediums for the rest of the National Defense Divinities, is obtained by speaking with the Master Samurai at The Hills building in Roppongi after the alignment lock.

"A deity of knowledge in Japanese myth. He conceived the plan to draw Amaterasu from Amato-Iwato, the cave she was hiding in."
—Persona 3 compendium

Omoikane is the first Persona with access to the Enradi and Me Patra skills. He can be obtained by fusing Nekomata with either Angel or Orpheus.

Omoikane can be obtained by fusing Forneus and Sandman or by either Izanagi or Yomotsu-Shikome and Apsaras.

Omoikane appears in every dungeon as a very rare enemy; He can only be hurt by Gun damage, as all others will be significantly reduced. He is hard to kill, as he will tend to cast Debilitate, further lessening the damage dealt. Given the chance, Omoikane will prefer to flee when confronted. However, when slain, he will give great amounts of Macca, Karma and Atma Points. Groups of Omoikane are rarer still and far harder to fully defeat.

"DO YOU THINK YOU CAN DEFEAT US? OUR TREASURE IS HEAVY, BUT WE ARE SWIFT AS THE WIND. ONLY MAGIC WILL WORK. BUT, ONLY WE KNOW WHICH MAGIC WILL WORK. HOW LUCKY DO YOU FEEL? LETS FIND OUT, SHALL WE?"
—Omoikane, Digital Devil Saga: Avatar Tuner 2

Omoikane reappears as a rare enemy whose encounter operation has been completely revamped. Omoikane now appears in groups instead of being fought alone and is no longer weak to Guns. Instead, each Omoikane in the group is resistant to physical attacks but weak to a single random element and the goal of the fight is to guess what elemental magic is effective to one of the Omoikane. If the party takes too long to deliver a successful attack or if the party uses skills that target enemy parties, the Omoikane will flee. The Omoikane appear in 5 different random groups, but each has a set weakness within these groups. From left to right:

The rewards for successfully completing the guessing game get larger as the party moves to different dungeons starting with the Meat Processing Plant. 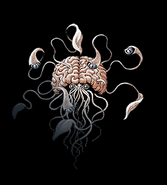 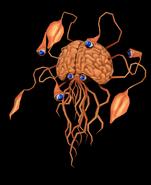