Okuninushi, also known as Oumononushi and Oonamuchi, is a demon in the series.

Formerly known as Onamuchi, Okuninushi (大国主, Oukuninushi)? is one of the Kunitsu and former ruler of Izumo, until Ninigi took over. In compensation, he was made ruler of the unseen realm of spirits and magic. He's said to be the god of nation-building, business and medicine.

Before becoming the ruler of Izumo, Okuninushi and his brothers, eighty gods altogether, were all suitors seeking the hand of Princess Yakami (or Yagami) of Inaba in marriage. They were all traveling together from their home country of Izumo to the neighboring Inaba to court her.

Along the way, the brothers encounter a poor little rabbit or hare, flayed and raw-skinned, lying in agony upon a sea shore. The group asks what happened, and the hare explains that he came from the island of Oki across the sea. The gods who listened on were cruel-hearted, and as a prank, instructed the hare to wash himself in the briny sea, and blow himself dry in the wind. The hare was of course in much more stinging pain than it was before.

Then came along Oukuninushi lagging far behind, due to evidently being treated as a luggage carrier. The gentlehearted god told the hare to go to the mouth of the river and wash himself in the fresh water, then gather the flowering spikes of cattail plants growing all around and scatter the catkins on the ground and tumble around until he is covered by fleece. The cured rabbit makes a divined prediction that Okuninushi will be the one to win Princess Yakami.

Just as the rabbit predicted, Princess Yakami/Yagami pronounces before the eighty gods that she chooses Okuninushi as her mate. The rival gods, his brothers, were all furious and conspire to slay him.

They compel him, on pain of death, to chase down a red boar, which was really a boulder heated red hot. Okuninushi dies of burns, but his mother, Sashikuni-wakahime, petitions Kami-Masubi, one of the Kotoamatsukami, and she dispatches two clam goddesses, Kisagai-hime and Umugi-hime, to restore him.

His rivals then trick him into walking onto a fresh tree log split open and held apart by a wedge, and snap him shut, killing him a second time. His mother revives him once again, and bids him to seek out Susano-o, who has been banished to the Netherworld.

In the underworld, he met the storm god Susano-o and his daughter Suseri-Hime, with who he shortly fell in love. Of course, Susano-o was aghast. In response, he sent Okuninushi through various trials, such as making Okuninushi sleep with snakes, centipedes and wasps and escape a burning meadow, which he survived thanks to a scarf that Suseri-hime gave him beforehand which protected him.

By now, after all his various attempts of murder, Susano-o was beginning to actually approve of Okuninushi. One night, after he told Okuninushi to wash his hair and go to sleep, Okuninushi tied Susano-o's hair to the rafters of his palace, and fled with Suseri-hime. He took Susano-o's bow, arrows and koto with him. When the couple made their escape, the koto brushed against a tree, awakening Susano-o. The god jumped up, and pulled down the palace with his hair. At the borders of the underworld, Susano-o almost caught up with the elopers and called out to them, advising Okuninushi to fight his brothers with Susanoo's weapons. Okuninushi asked him to make Suseri-Hime his wife, and to build a palace at the foot of Mount Uka, which he agreed to. After the entire ordeal was over, Okuninushi became ruler of the province of Izumo.

Sometime after this, Okuninushi was told to build the world with the help of the dwarf deity Sukuna-Hikona. The two together formulated the arts of medicine, means of controlling disasters caused by birds and insects and became close friends.

"The snake god revered at Japan's founding. He is a thunder god, as well as a rain god and fertility god. In the Nihon Shoki, Oomononushi is another name for Ookuninushi."
—Shin Megami Tensei A-Mode DDS dictionary

"A terrestrial deity and descendant of Susanowo, he is an important god in Japanese Izumo mythology. He is a peaceful god who prefers not to fight."
—Shin Megami Tensei III: Nocturne compendium

"The earlier name of the Nation Ruler Okuninushi. Considered to represent the earth, as opposed of Amaterasu, who represents the heavens.
Has several names, including Yachihoko, Utsushi-kunitama, and Ashihara-shikono-o. Was given the hand of Yakami-hime for helping the white hare of Inaba. Was killed several times by his eighty brothers, but was each time resuscitated by the gods of Takahamagara."
—Onamuchi, Shin Megami Tensei IMAGINE compendium

Onamuchi can only be acquired through fusion. He appears within Ichigaya's Kagurazaka Zhu Que Caverns gold-level instance and within Ueno's Kuchinawa Caverns, where killing him will spawn Yamata-no-Orochi.

"A god of the earth in Japanese mythology, and an important figure in the myths of Izumo. He is exceedingly handsome and has power over agriculture and medicine.
He overcame a series of difficult tasks set for him by Susano'o to win the hand of Susano'o's daughter Suseri-hime in marriage. Later, he used a large sword borrowed from Susano'o to defeat his brothers, the "Eighty Gods," and built for himself a domain and a great palace in Izumo. From this myth, he was considered to be the ancestor of Izumo-no-Kenmei."
—Okuninushi, Shin Megami Tensei IMAGINE compendium

Okuninushi can only be acquired through fusion. He appears regularly within Ichigaya's Kagurazaka Zhu Que gold instance and spawns alongside Susano-O in one of his boss rooms.

"A Kunitsu deity of Japanese mythology that governs agriculture and medicine. Said to have built the country of Izumo with Susano-o's daughter, Suseri-Hime."
—Shin Megami Tensei IV compendium

Okuninushi can be found in the Chiyoda region at the Kanda Shrine. After the fight against Kuebiko a Challenge Quest called Demon Guarding the Shrine will be available. Okuninushi must be defeated as he is attacking humans who he believes are responsible for the destruction of the Field of Autumn Leaves (Akihabara), which was actually the Ashura-kai's doing. Now he seeks to deliver divine punishment to all humans for spoiling the earth after learning Flynn is attempting to slay him. As he dies he apologizes to his friend for not keeping his promise.

Okuninushi can teach Nanashi the Fatal Sword, Diarama, Me Patra, Media and Estoma skills through his Demon Whisper. He benefits from learning healing and Physical skills.

Okuninushi is the leader of the Kunitsu. Originally he and his fellow Kunitsu served Bethel, but left when they saw that they did not uphold the ideals that they claimed for and made a home in Kanda-no-yashiro. Along with Take-Minakata and Sukuna-Hikona, they were contemplating on attacking Surt when the protagonist arrived. Initially seeing them as a disposable asset, he gave them the Akiha-Gongen Talisman, allowing them to defeat Surt.

After Surt's demise and completing "The Search for Oyamatsumi," Okuninushi will offer the protagonist the quest "Clash with the Kunitsukami." Now seeing the protagonist as a separate god and that they feel familiar to him, he and the rest of the Kunitsukami challenge him to a fight to gauge their strength. If the protagonist defeats them all, he will eventually recognize the feeling as that of Susano-o and grants the protagonist his strength, unlocking him for fusion.

"A Kunitsu deity of Japanese mythology that governs agriculture and medicine. Said to have built the country of Izumo with Susano-o's daughter, Suseri-Hime."
—Devil Summoner: Raidou Kuzunoha vs. The Soulless Army devil chart

Oukuninushi is the fifth member of the Frost Order and can only be summoned through fusion once Raidou has reached level 32.

Okuninushi appears in a special Case File pitting Raidou against several of the Kunitsu bosses of the previous game. He is the leader of a stray squad of Yomi-Kugutsu, and, possessed by the undying fury of the Kunitsu, seeks to stamp out their rivals the Amatsu, and establish a land of the dead; he is also particularly angry about the defeat of his close friend Sukuna-Hikona, believing his death was manipulated by the Amatsu.

Once defeated, the malevolent desire will fade away, but he establishes the Kunitsu's grudge is still latent, and asks Raidou to purge it from other deities who might be possessed by the bloodlust. He frees Tsunagatsu of his curse upon learning the quest to beat him came from him, noting that he could only seal away the curse for 100 years.

"A Kunitsu deity of Japanese mythology that governs agriculture and medicine. He's said to have built the country of Izumo with Susano-o's daughter, Suseri-Hime."
—Persona 5 background

Okuninushi is the fifth Persona of the Emperor Arcana and can only be obtained through fusion in the Velvet Room. He is one of four Personas to learn the Mapsio skill and one of two to learn the Psy Break skill. He is also the only natural source of the Psy Boost and Evade Nuke skills. When itemized using Electric Chair execution, Okuninushi yields the Official's Robe male armor, which has 178 DEF, 18 EVA and adds the Evade Curse (high) effect to the wearer. Okuninushi is also one of the ingredient Personas required to summon Yoshitsune with advanced fusion.

Okuninushi is the fourth Persona of the Faith Arcana.

"A Kunitsu deity of Japanese lore that governs agriculture and medicine. Because he overcame the ordeals given him by Susano-o and built the country of Izumo with Susano-o's daughter, Suseri-hime, he is said to be the ancestor of Izumo-Takeru and has a position as the most important god in Izumo lore."
—Devil Survivor Overclocked compendium

Okuninushi appears in Amane's 8th day route as an antagonist and final boss. Unwilling to leave Japan in the hands of the messiah, he threatens to destroy the nation and rebuild it anew unless the protagonist can fulfill his terms: to guide the first murderer, Cain/Naoya, to salvation as a sign of worth.

During the final battle, he revives twice due to the power of his mother. After the second revival, Naoya arrives and places a barrier to prevent him from reviving. Upon his defeat, Okuninushi agrees to abdicate Japan to the protagonist. He will be unlocked for fusion upon continuing from a Clear Save.

"A Kunitsu deity of Japanese mythology that governs agriculture and medicine.
Said to have built the country of Izumo with Susano-o's daughter, Suseri-Hime."
—Devil Survivor 2 Record Breaker compendium

Okuninushi is one of the downloadable demons in the game, only obtainable by fusing Susano-o with Hare of Inaba.

Okuninushi as he appears in Raidou Kuzunoha vs The Soulless Army 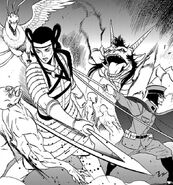 Okuninushi as he appears in Devil Summoner: Raidou Kuzunoha vs. The Lone Marebito

Okuninushi as he appears in Persona 5 The Animation