Ogre is a demon in the series.

Ogre (feminine ogress) is a legendary monster of European lore. It is usually depicted as a large, hideous and degenerate humanoid being with a taste for human flesh, especially infants and children. Despite this, however, it's very stupid, allowing many people to trick it.

In mythology, ogres are often depicted as inhumanly large and tall and having a disproportionately large head, abundant hair, unusually colored skin, a voracious appetite, and a strong body. Ogres are closely linked with giants and with human cannibals in mythology.

Ogres frequently feature in fiction throughout the world. They appear in many classic works of literature, and are most often associated in fairy tales and legend with a taste for infants.

"An evil, man-eating monster of French legend. Males are called ogres, while females are called ogresses. Twice the size of humans, they possess tremendous strength and can also use magic. Although they can change their shape, their intelligence is low. They will eat any human, but prefer pretty young women and babies.
The name "ogre" was invented by writers to give a distinct name to the man-eating monsters. It may also be derived from the name of the Roman death god, Orcus, or from Ygg, another name for the Norse god, Odin."
—Shin Megami Tensei IMAGINE Compendium

Ogre can be contracted in Shibuya's Celu Tower instance and Ikebukuro.

Ogre can be found in Midtown. It can teach Flynn the Mortal Jihad skill through its Demon Whisper.

Ogre can be found in Shinjuku in the east entrance main street, Nicho, Kabuki-Cho passage and Kabuki-Cho areas. It can teach the Mortal Jihad skill through its Demon Whisper. Ogre benefits from learning Physical attack skills.

Ogres are first encountered in Kasugayama High School when the party goes to investigate the student council president.

"An evil monster that lives in the hills. They are strong but stupid.
It is large in size and is said to attack and eat humans, especially young, beautiful women. It can also transform, but its relative stupidity has caused it to often fall for human tricks."
—Devil Survivor 2 compendium

Ogre is the first demon that is summoned via Io's phone. After the subway crash, Io's Demon Summoning Program triggers, and Ogre is summoned to help defend her from the hostile Kobolds in the area. Ogre appears later that day in the fight against Dubhe to shield Io and Hibiki from Dubhe's attacks. It also appears on Tuesday, being ordered to apprehend the culprit behind the JP's hacking incident. However, Ogre is unsuccessful in doing so, as it was destroyed quickly by Botis before doing anything.

From then on, Ogre has made very minor appearances as a weak common demon, the last being in a one-sided massacre from Airi Ban's Cait Sith. It is also still currently present in Io's demon roster alongside Lugh, seemingly untouched in the ordeal against said demon.

Ogre as it appears in Shin Megami Tensei IMAGINE

Ogre as it appears in Last Bible II

Ogre as it appears in Last Bible Special 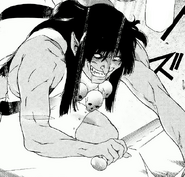 Ogre as it appears in Persona: Tsumi To Batsu

Ogre as it appears in Card Summoner

Ogre as it appears in the Devil Survivor manga adaptation

Ogre as it appears in Devil Survivor 2

Ogre in Devil Survivor The Animation 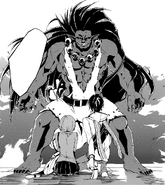 Ogre as it appears in the Devil Survivor 2 The Animation manga
Community content is available under CC-BY-SA unless otherwise noted.
Advertisement