A former member of the Order of Messiah, Ogami became disillusioned by them after learning of their involvement in the Great Cataclysm. She then moved to the Cult of Gaia, but became dissatisfied with them as well and left. Ogami instead begins to aggressively attack what she sees as forces corrupting humanity's resurgence and the creation of the Innocents. She does not use a COMP like most Demon Busters, instead summoning demons through charms and the bodies of dead Innocents.

Players first encounter Ogami when she attacks Third Home with a Taraka, hinting she may have been responsible for the attack on Second Home and the death of the players' tutorial mentor figure, DB Kuroe. Throughout the acts, she becomes a reoccurring antagonist until players are directed to lead both the forces under Lord Doukan and Lord Judah to wipe her out at her base in Ichigaya's Old Ichigaya Camp. There, she confronts the player in front of a mass of Innocent bodies, using them to allow a figure from the past she believes to be able to save Tokyo to possess her body.

After players defeat her and her army of demons and assassins, they are encouraged to kill her by DB Mikanagi, which gives an Alignment shift according to whether players move to do so or not. Regardless if it is the player or DB Mikanagi that moves to kill Ogami, Azura will stop them, leaving Mikanagi to stab her in the leg instead. 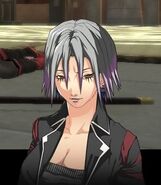 Ogami in a cutscene along with an Oni