Odysseus is a Persona in the series.

Odysseus, also known as Ulysses, is a legendary Greek hero and fictional king of Ithaca who descended from the line of Hermes. He was a general in the Trojan War, being key in the city's fall. He is the Husband of Penelope, father of Telemachus, and son of Laertes and Anticlea.

Odysseus is renowned for his guile resourcefulness, and is hence known by the epithet Odysseus the Cunning. He is most famous for the ten eventful years he took to return home after the ten-year Trojan War and his famous Trojan Horse trick.

He is the hero of Homer's epic poem Odyssey. Odysseus also plays a key role in Homer's Iliad and other works in the Epic Cycle. 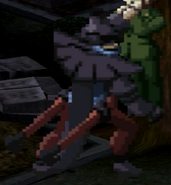