Odin is a demon in the series.

Odin (Old Norse: Óðinn), meaning The Furious, is considered the chief god (known as an All-Father) of the Aesir (and sometimes the Vanir as well) in Norse mythology. He is associated with wisdom, war, frenzy, knowledge, battle and death and also magic, sorcery, poetry, the gallows, healing, royalty, prophecy, victory and the hunt, and is the husband of the goddess Frigg.

Odin is often portrayed as being an eminently honorable ruler and battlefield commander, but to the ancient Norse, he was nothing of the sort. In contrast to more straightforwardly noble war gods such as Tyr or Thor, Odin incites otherwise peaceful people to strife with what is a downright sinister glee. He maintains particularly close affiliations with the berserkers and other “warrior-shamans” whose fighting techniques and associated spiritual practices center around achieving a state of ecstatic unification with certain ferocious totem animals. He is also known by hundreds of names some which includes: Wodan, Aldagautr, Biflindi, Bileygr, Draugadróttinn, Dróttinn, Fengr, Fjölnir, Forni, Grímnir, Hangi, Hávi, Jölnir and Vegtam.

He only has one eye because he bartered the other in order to drink from the well of Mimir and gain its knowledge. He had many abilities like astral projection, shapeshifting and control of the elements and weather. He also could read magic runes that no one else could since he had hung himself from the World Tree Yggdrasil while inflicting self-torture in order to gain great knowledge.

Odin is the chief god of the Norse pantheon. He and his brothers Ve and Vili killed the frost giant Ymir and built the world from his body. He is also the father of most of the gods, including Thor, Vidarr and Baldur, who was later killed by a manipulated Hod with a dart of mistletoe. He is associated with his spear Gungnir, the wolves Geri and Freki and the two ravens Hugin and Munin, and the eight-legged horse Sleipnir.

Odin is given primacy over female beings associated with the battlefield, the Valkyries, and he himself oversees the afterlife location Valhalla of Asgard, where he receives half of those who die in battle, the Einherjar. The other half are chosen by goddess Freya for her afterlife location, Fólkvangr. In Ragnarok, he gets devoured by the great wolf Fenrir.

Doi's design for Odin draws inspiration from Ultraman, a character from the Ultra Series.[1]

"Origin: Scandinavia. The one-eyed head god of Norse lore. He hung himself from Yggdrasil to learn magical runes. He also sacrificed an eye at Mimir's spring to gain wisdom. He now gathers brave souls at Valhalla in preparation for Ragnarok. It is said that in the final battle, he is fated to be eaten by Fenrir."
—Shin Megami Tensei A-Mode DDS Dictionary

"The chief god of Norse mythology. He is the god of war and death, skilled in magic and deeply associated with poetry and song.
Odin is often depicted with long, white hair, missing one eye, and holding his spear Gungnir. It is said none can match his prowess in magic, though he was once a pupil of the goddess Freya. Ever thirsty for knowledge, Odin will not hesitate to sacrifice to gain it. It is said he achieved wisdom by offering one of his eyes to the giant Mimi and drinking the Water of Knowledge from the roots of Yggdrasil.
Odin lives in a great hall in Valaskjálf, home of the gods. From his throne Hlidskjalf he peers down at the world below. Whenever he sees brave warriors die in battle, he sends his warrior maidens, the Valkyries, to gather their souls and bring them to Valhalla, where they prepare for Ragnarok, the end of the world.
At Ragnarok, Odin is fated to be swallowed by the giant beast Fenrir."

Odin can only be acquired through triple fusion, but does not require a plug-in. He appears as the boss of Shibuya's Celu Tower silver-level instance and can be summoned by Thor in the boss room of the gold instance. He possesses a unique skill in Gungnir, an almighty shot with fast incantation and cooldown. He also acts as one of the two key-bearing mini-bosses that players must defeat in order to summon Metatron in Shinagawa Diaspora.

Odin is encountered in Sector Eridanus as a quest giver who asks the protagonist to look for Sleipnir and bring it to him. As the reward for giving it back, he will hand out the Odin Ring.

Odin appears in the Challenge Quest, Save the Old Man. He has turned into an old human man and has lost his memories and wishes to tell a story to Flynn about the King of Heroes Wodan. Thor, under a fake identity, sends Flynn and two other hunters to fight before him to restore his memories and fights him. After the battle Odin halts the fight, revealing he has regained his memories and recovers his true form. He returns to Asgard alongside Thor, but promises that the humans who helped him would be allowed to go to Valhalla after their deaths.

Odin is one of the leaders of the Divine Powers. His first role in the story is coming to Nanashi and Asahi and telling them of a powerful sealed demon who could help them fight alongside Flynn. In reality, the demon was Krishna, whose freedom sets off the rise of the Divine Powers to the forefront of the conflict in Tokyo. From then on, Odin acts as Krishna's primary enforcer. He beats Flynn into unconsciousness during the initial group appearance of the Divine Powers and later defeats Nanashi's party in an unwinnable battle when they attempt to rescue Flynn in Tsukiji Konganji. He takes Dagda's betrayal of the other gods personally due to them having apparently been the same being at one point. He appears to be slain by Flynn in the second assault on the Gaean temple, but this was later revealed to be part of a ruse to get rid of Lucifer and Merkabah and complete Shesha's transformation into the Cosmic Egg. Odin is finally fought in full at the entrance to the Cosmic Egg, and dies cursing Dagda. After his death, Gaston takes his spear, Gungnir, and uses it as his new weapon.

"The All-Father in Norse Mythology. Warrior, sorcerer and near insatiable seeker of knowledge, he rides his eight-legged horse Sleipnir, armed with both Gungnir, his mighty spear and Draupnir, an enchanting ring.
He is known to have willingly sacrificed an eye to drink from the Well of Wisdom and is also recognized as the one who welcomes the souls of departed warriors as they cross over into Valhalla."
—Shin Megami Tensei V lore

Odin is the representative of the North European branch of Bethel. He is first seen at the summit and watches Abdiel lose to the protagonist, upon which he decides to break off and seek his old Knowledge to become a Nahobino to claim the throne. Tasking his Valkyries to find the human bearing his Knowledge, the protagonist confronts him for his key piece, the Key of Harmony. Odin fights them but is ultimately defeated and gives up his key piece, asking what the protagonist intends to do when they claim the throne before dying. This in turn also unlocks him for fusion.

If he is in the protagonist's party when they face Valkyrie and choose to speak with her, he may appear and talk to her. He asks her for an update on the collection of souls and is pleased to learn that they are not having any issues taking souls from Paradise to Valhalla in part due to the protagonist's actions. While he admits that he has ended up serving them, he states that all is not lost and entrusts her to continue bringing souls to Valhalla for their next opportunity, believing that wisdom would eventually prevail.

"In Norse lore, he is the father of the gods, as well as the god of wisdom. He rides his eight-legged horse Sleipnir, wields his spear Gungnir, and wears the ring of Draupnir. He freely sacrificed an eye to drink from the Well of Wisdom. He also welcomes the souls of warriors to Valhalla."
—Devil Summoner: Soul Hackers 3DS compendium

Odin is one of the only two demons (the other being Amazon) to have the Demon's Intimidation skill, which greatly lowers attack power of opponents.

In the 3DS remake, a variant Odin can be unlocked through Nemechi's male angel form, at a cost of 300 D-Souls. He uses his design from the first Devil Summoner installment. This version is more focused on physical attacks. Both versions can be transformed into a Soma with Mystic Change.

Odin can be fused after maxing out the Emperor Arcana Social Link.

With the addition of Weapon Fusion in this edition of the game, it is possible to fuse Odin with any kind of Nihil Weapon to obtain Gungnir, his legendary spear. It has an attack value of 310 and a hit rate of 97. His Heart Item is Draupnir, his ring. It doubles the effects of healing spells.

Odin was used by Makoto to defeat Takaya Sakaki and Jin Shirato after Chidori Yoshino's death.

Odin is the Ultimate Persona of the Emperor Arcana. He learns the highest tier wind spell, Panta Rhei, which inflicts severe wind damage upon a single enemy. The spell cannot be passed on through fusion.

In anime, he was summoned by Yu during his battle with Adachi. Odin is also represent bond of Yu and Kanji Tatsumi.

"The father of all gods in Norse legend. He willingly sacrificed one eye to gain wisdom. In preparation for Ragnarok, he gathers the souls of fallen warriors to his hall, Valhalla."
—Persona 5 background

Odin is the ultimate Persona of the Emperor Arcana and can only be obtained through fusion in the Velvet Room once the Emperor Confidant has been completed. Odin is the only source of the Thunder Reign and Wild Thunder skills. He is also one of the few Personas to learn Fast Heal and Elec Amp. When itemized using Electric Chair execution, Odin will yield the Wild Hunt SMG for Ann Takamaki, which has 386 ATK, 84 ACC and adds the Despair (med) effect to Ann's Gun attacks.

"A warlord and spellcaster who roams the field of battle with his trust spear, Gungnir."
—Demonary, DemiKids

Odin can perform the combo Death Blade with Ankuu, Ragnarok with Surt and Doombringer with War Rox.

Odin appears as a boss on Akira's route, where he is faced in the Inferno Pit. Alongside him is a Gnome that will heal him.

"In Norse lore, he is the father of the gods, as well as the god of wisdom.
He rides his eight-legged horse Sleipnir, bears his spear Gungnir, and wears the ring of Draupnir. He freely sacrificed an eye to drink from the Well of Wisdom. He also welcomes the souls of warriors to Valhalla."
—Devil Survivor 2 compendium

Odin is a Unique demon that doesn't require a particular fusion combination to create. Instead, the player has to achieve a Fate level of 3 with Fumi Kanno before it is available.

"A great warrior and magician, seeker of wisdom and the chief of the Norse gods. He willingly sacrificed an eye to drink from the Well of Wisdom. As the chief of the gods, Odin will gladly welcome anyone with a warrior spirit."
—Shin Megami Tensei: Liberation Dx2 compendium

The fight is unwinnable; after a few turns, he will use Will of Thunder and Concentrate followed by Thunder Reign, which ends the fight. 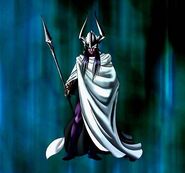 Odin as he appears in Card Summoner

Odin as he appears in Devil Survivor

Odin as he appears in Devil Survivor 2

Odin as he appears in Persona 4 The Golden Animation

Odin as he appears in Persona 3 The Movie