Oberon is a demon in the series.

Oberon is the high king of the Fae and the husband of Titania (or Mab), the high queen of the Fae. He rules over the moonlight, dreams and all fairy rites. Some depictions say he is in charge of only the Seelie Court, but other depictions make him the leader of the entire fairyland. Although he has the face of a handsome young man, a curse has made him no taller than a young child that he received shortly after birth. However, the curse gives him eternal beauty.

Oberon is described as a benevolent being by the Fae, although others state that he is quite malicious when a certain incident affects the well being of his kingdom and people. He is polite and sometimes even friendly towards humans, however, he can be a selfish, short-tempered ruler, often falling in love and flirting with human women, only to be restrained by his consort Titania. It is said that when Oberon is angry, his rage affects the very weather and causes nature to fall into discord. The two are said to have once lived in India, and they would cross the sea to Europe at night to dance in the moonlight.

He first became widely known when he appeared as a character in Shakespeare's "A Midsummer Night’s Dream," but appeared earlier in the 13th century French epic "Huon of Bordeaux." In some stories, specifically in "Huon of Bordeaux," it is said that he is the son of Morgan le Fey and Julius Caesar, believed to have been born some time after Caesar's defeat of Pompey.

"Origin: England. The king of fairies and consort to Titania. He also appears as a king in Shakespeare's play, 'A Midsummer Night's Dream.' In addition, he plays a role in the French chanson de geste, 'Huon de Bordeaux.' He looks handsome, but is cursed to appear three years old. He is very polite to humans, at times even showing affection towards them."
—Shin Megami Tensei A-Mode DDS dictionary

"The King of the Fairies and the Air, and the husband of Titania, the Fairy Queen. He rules over moonlight, dreams, and all fairy rites. He first became widely known when he appeared as a character in Shakespeare's "A Midsummer Night's Dream." Although he has the face of a handsome young man, a curse has made him no taller than a three-year-old child. He is polite and sometimes even friendly towards humans.
Oberon is known as a selfish, short-tempered ruler, often falling in love with human women only to be restrained by his queen Titania. The two are said to have once lived in India, and would cross the sea to Europe at night to dance in the moonlight."
—Shin Megami Tensei IMAGINE compendium

Oberon can be contracted on Shibuya field. He acts as a boss in Shibuya's silver-level Quartz instance and rarely appears as an NPC at the end of the bronze level instance to start off the Dewdrops from a Flower quest where he asks for the player's help in obtaining a special medicine for him.

"The king of the faeries and the husband of Titania. He is quite old, but due to a curse he received when he was young, he remains small yet still beautiful. He often flirts with human women, resulting in a scolding from his wife."
—Shin Megami Tensei: Strange Journey compendium

Oberon can be found in the Monochrome Forest of the Expanse. He can teach Flynn the Zandyne, Makarakarn and Diarahan skills through his Demon Whisper.

Oberon is an inhabitant of The Fairy Forest. Nanashi's group finds him in the middle of an argument with his wife Titania. She confronts him over a dagger which he created, wary that his invention is another scheme of his. Oberon reveals it to be the Jade Dagger, which allows spirits to physically battle mortals and demons. Revealing that normal humans can't wield the dagger, he spots Navarre and decides that he should have it. Despite this kind gesture, Titania still suspects her husband is up to foul play and only got lucky this time.

Oberon can teach Nanashi the Mazandyne, Sexy Dance, Diarahan and Makarakarn skills through his Demon Whisper. He benefits from learning Force, healing and support skills.

"The king of the fairies and the husband of Titania.
He is quite old, but due to a curse he received when he was young, he remains small yet still beautiful. He often flirts with human women and has earned many a scolding from his wife as a result."
—Shin Megami Tensei V lore

Oberon, along with his wife Titania, are the leaders of a friendly Fairy Village and help protect both the demons and humans within from other demons who try to prey on them. He also appears as a common enemy. Oberon can be found occupying an Abscess in Kanda, alongside Hanuman and Isis.

Oberon is the highest ranked beast of the Fairy race. Like all Rank 4 beasts, he is only obtainable by evolving the Rank 3 of its race.

If Raidou has either Oberon or Titania summoned in a battle against the other, then a conversation between them will either start automatically or upon negotiation.

"Fairy king and husband to Titania. Was cursed as a child, and has not grown any larger since."
—Persona 3 compendium

Oberon is the second Persona of the Emperor Arcana. One of Elizabeth's Requests is to fuse him, with a level of 17 or higher.

Oberon was summoned by Makoto to weaken the Arcana Lovers so that he and the other members of SEES could finish it off. Makoto obtained him after the Arcana Emperor was defeated.

"The king of the fairies and Titania's husband. He is quite old, but due to a curse, his looks are that of a young boy. He often flirts with human women, ending in a scolding from his wife."
—Persona 5 background

Oberon is the eighth Persona of the Emperor Arcana and can be found as a Shadow in Shido's Palace and in the Sheriruth area of Mementos, with the title "Unfaithful Dream-King." He is one of four Personas to learn the Brain Jack and Elec Amp skill and one of two to learn Psy Wall. When itemized using an Electric Chair execution in the Velvet Room, Oberon will yield the Elec Amp skill card.

The Shadow of Mr. Takase, who was responsible for guilt-tripping Sadayo Kawakami by threatening to expose her part-time job as a maid, will take the form of Oberon when encountered in Mementos during the request "A Teacher Maid to Suffer." He has access to the Zionga, Mazionga and Heat Wave skills. Shadow Mr. Takase resists Nuclear damage and is weak to Psy skills.

The IT company president who played Medjed also manifests as Oberon in Shido's Palace.

"King of the fairies and a self-proclaimed authority on beauty and love."
—Demonary, DemiKids

Oberon is a traveler between worlds, seeing the sights of the different worlds and the people that live there. He is first encountered in Hydraville in Light Version and will travel to Rem Mall, Frostville, Center Town and finally Annwn Town after being talked to in each one. In Annwn, he will join the party.

"The king of the fairies and the husband of Titania. He is quite old, but due to a curse he received as a child, he remains young and beautiful. Oberon is magically gifted with the power to influence the minds of men and place them under his control."
—Shin Megami Tensei: Liberation Dx2 compendium 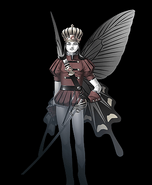 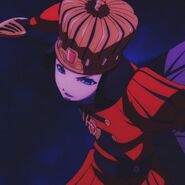 Oberon in Persona 3 The Movie 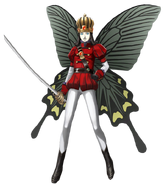