Nyarlathotep is a demon in the series. In Megami Ibunroku Persona and the Persona 2 duology, he is the main antagonist.

Nyarlathotep was known to many as The Crawling Chaos, The God of a Thousand Forms, The Dweller in Darkness, The Faceless God, The Floating Horror, The Haunter of the Dark or many others, is an Outer God in the Cthulhu Mythos. He is the spawn of Azathoth. Like many of the well known Old Ones, he was created by H. P. Lovecraft.

Nyarlathotep differs from the other deities in the Mythos in a number of ways. Most of the Outer Gods are exiled to the stars, like Yog-Sothoth and Azathoth, and most of the Great Old Ones are sleeping and dreaming like Cthulhu; Nyarlathotep, however, is active and frequently walks the Earth, actively seeking to agitate the universe into madness, woe, and discord. He has been known as a manipulative, charismatic and cruel entity who enjoys bringing chaos to the many worlds he walks. He has "a thousand" other forms and manifestations, most reputed to be quite horrific and sanity-blasting.

While the other Mythos gods are often described as mindless or unfathomable, rather than truly malevolent, Nyarlathotep delights in cruelty, he is deceptive and manipulative, deceiving the antagonists of the mythos into believing he could grant them power (which he did at the cost of nearly losing their humanity) and manipulating them into becoming his pawns and even cultivates followers and uses propaganda to achieve his goals.

In the Persona series, he is symbolic of the destructive potential of Carl Jung's collective unconscious and actively seeks to agitate the universe into madness, woe, and discord.

In the series, he is given a prominent plot role, known as The Crawling Chaos, as the counterbalance to Philemon in the Persona series. Unlike Philemon, Nyarlathotep is able to operate in the outside world and take an active role. Throughout the series he employs the use of Shadow Selves of characters to accomplish his goals. Shadow versions of Tatsuya Suou, Lisa Silverman, Eikichi Mishina, Maya Amano and Yukino Mayuzumi appear as bosses in Innocent Sin thanks to rumors. In Eternal Punishment, Maya Amano, Katsuya Suou, Ulala Serizawa, and Baofu all have Shadows Selves which attack the party as bosses in pairs. Nyarlathotep is also capable of appearing as anyone he chooses. It is revealed in Eternal Punishment that he is represented by a black butterfly.

Nyarlathotep is the "persona" of Takahisa Kandori. After Kandori is defeated by the protagonist and his friends, Nyarlathotep forcibly enters Kandori's body and transforms him into God Kandori, saying he will grant him the power he seeks. Retroactively, Nyarlathotep has been mentioned to have engineered the whole incident with the intention of giving the humans a chance to destroy all of reality, allowing him to win his bet with Philemon.

An alternate form of Nyarlathotep can be fused in the Velvet Room by adding the "Faceless Mask" totem, dropped by God Kandori, to a fusion with a Tower Arcana Persona result. Nyarlathotep has "Worst" affinity with every party member except for Reiji Kido, Kandori's half-brother.

Nyarlathotep is the main antagonist of the Persona 2 duology. An extremely manipulative, charismatic and cruel entity born from the human consciousness, he and Philemon are acting on a bet to see if humanity will become enlightened or ultimately destroy itself.

He is described as the destructive side of Humanity's collective unconscious, and as such, the living embodiment of Mankind's collective evil; every thought, action or feeling that derives in experiencing the desire to bring harm to others or oneself in any form fuels Nyarlathotep's existence. His reason for providing the human race with the means to drive itself to destruction is given as a bet between him and Philemon, who holds that they instead will ascend to a greater destiny.

In order to rig things in his favor to end humanity, he gave Sumaru City the ability to spread Rumors which are events that would become true when being spread by people, effectively allowing him to alter reality as he wishes. He manipulates an organization in each part of the duology to fulfill his objective, being the corrupted child playgroup Masked Circle in Innocent Sin and the political group New World Order in Eternal Punishment. In either case, his final goal is complete and utter world destruction, which he deliberately advances the progress of in order to display to Philemon that people will ultimately guide themselves to their own ruin.

He appears as Jun Kurosu's late father (Akinari Kashihara), and the Fuhrer, who was supposedly revived by rumors. Due to his charisma and self confidence compared with his real counterpart, he acts as an ideal substitute parent for Jun. His goal in this game is to fulfill the Oracle of Maia to guide humanity to destruction, which he orders his Masked Circle and Last Battalion servants to fulfill regardless of cost.

The rumors orchestrated by Nyarlathotep include the revival of Nazis in Antarctica and the Oracle of Maia, both of them which are fictitous events brought to life via people's thoughts. He also manipulates Jun Kurosu into exacting revenge against Tatsuya Suou as the Joker by making him think Suou killed Maya Amano. This is a blatant lie intended to manipulate Jun, and the true arsonist was an insane man known as Tatsuya Sudou and Maya was seen alive and well early on in the game (albeit suffering from pyrophobia).

He serves as the game's final boss in the form of the Great Father (グレートファーザー, Gurēto Fāzā)?, a fusion of the main cast's fathers. The Great Father's arms and legs are each a particular character's father; Lisa Silverman's father (Steven Silverman) is the left arm, Maya Amano's (Masataka Amano) is the right arm, Eikichi Mishina's (Kankichi Mishina) is the left leg, and Jun Kurosu's Akinari Kashihara is the right leg. The head takes the shape of a fake Akinari Kashihara based on Jun's delusions.

After the fight, he uses Maya Okamura to stab and kill Maya Amano with the Spear of Longinus, killing her and fulfilling the Oracle of Maia. This causes the earth to stop rotating with Xibalba being the last vestige of humanity alive, rendering him victorious. However, his victory was undone when Philemon erases the party's memories and creates the Eternal Punishment reality, resetting the events as if they never happened. However, Suou refused to forget the events in the old timeline due to refusing to kill his shadow, allowing Nyarlathotep to have the chance to repeat the same events again.

Nyarlathotep fulfills a similar role as he did in Innocent Sin. While he does not restore Tatsuya Sudou's memories of the events from the previous game, he does talk to him and tease him with comments intended to spark the general idea of the same events in Sudou's addled mind, so he would be driven to repeat them in the Other Side. He appears before the party as Tatsuya Suou.

Because of his past defeat in Innocent Sin, he took the opening Tatsuya Suou provided him with when he refused to abandon his memories of the Other Side, implementing a new plan to let Mankind destroy itself, and branded Tatsuya with a mark to remind him that he doesn't have much time before the Other Side comes back.

He continues similar schemes trying to annihilate humanity by engineering people's thoughts, but this time he uses the New World Order, a group of corrupt politicians to act as his servants. He spread the unearthing of the mummy of a fabricated tyrant known as Kiyotada Sumaru who via kotodama, supposedly told the New World Order to extract Kegare from people and insert them into the earth's core, which will result in the earth dragons arising from it and they will destroy the world out of rage. The rumor of Takahisa Kandori's revival was also spread, causing him to literally return to life. In order to fulfill the prophecy, Nyarlathotep turns Tatsuya Sudou into the JOKER, a contract killer, and uses Chizuru Ishigami to spread a mystical infection on anyone who called him that will result in the host turning into a bloodthirsty maniac. The New World Order then extracts Kegare from the Jokers and fills the earth's core with them, causing the destruction of the world while they board Xibalba to utopia.

Save for this rumor, he was implied to fabricate historical events surrounding Gozen and bogus ancestors of Maya Amano, Tatsuya Suou and Jun Kurosu to mock them. It was also revealed later that the Time Count is Nyarlathotep in disguise.

In the end, a new group, formed by Tatsuya, Maya, Baofu, Tatsuya's brother Katsuya Suou, and Ulala Serizawa again stood against him and his plans of extermination. After the defeat of Kiyotada Sumaru, Xibalba is thrown into the collective unconsciousness and the party climbs the Monado Mandala to confront him. Despite unleashing his true forms against the party, he was defeated once again. Following his second defeat, he was banished to parts unknown, eradicating the power of Rumors and allowing Philemon to win the bet. He wasn't destroyed forever, though, because he is an undeniable, indelible presence in Humanity's heart, and may still return.

In Tatsuya's new scenario in the remake, Shiori Miyashiro's self is shattered into Trapezohedrons; Nyarlathotep's avatar, The Faceless God, seizes the last of the eleven stones, the one containing Shiori's shadow, and confronted Tatsuya and his group in the Kadath Mandala. Upon his defeat, he tells the party that soon they'll meet the real him in the flesh and is forced to leave behind not only Shiori's Trapezohedron, but also Randolph Carter's Trapezohedron of Emotion. Unlike the Nyarlathotep from the main story, The Faceless God appears as how Nyarlathotep is depicted in the traditional Shin Megami Tensei games.

It is revealed in the last chapter that Rago is an avatar of Nyarlathotep.

"A god of the Cthulhu mythos. He came to Earth in ancient times from outer space and is known as the Crawling Chaos. He acts as a proxy to his masters such as Azathoth, who have no intelligence to make their desires manifest in our world. Because he can assume various forms, he is known as a faceless god. He is particularly known as the Haunter of the Dark, and he seems to have other guises on Earth as well."
—Devil Survivor Overclocked Compendium

Known as Nyalatotep. In the 8th day, God vs Hero, Nyarlathotep is one of Naoya's demons when he appears to help during the final battle against Okuninushi.

Nyarlathotep appears as the strongest member of the Vile race.

Nyarlathotep's name appears as the name of the 8th layer in JP's Alaozar Firewall System.

An event titled The God of Chaos Cometh was held in the game to coincide with Nyarlathotep being added to the game.

Nyarlathotep as he appears in Devil Survivor

Nyarlathotep as seen in Devil Survivor 2 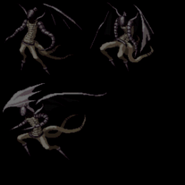 Nyarlathotep as he appears in the Megami Ibunroku Persona manga 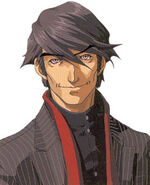 Nyarlathotep in the guise of Akinari Kashihara 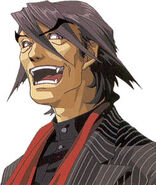 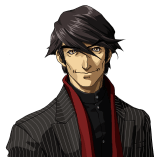 Portrait of Nyarlathotep as Akinari Kashihara 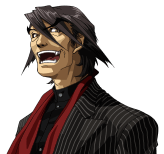 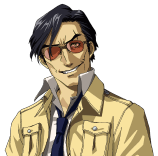 Portrait of Nyarlathotep as Masataka Amano 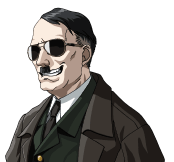 Portrait of Nyarlathotep as the Fuhrer

Nyarlathotep disguised as the Time Count

The final battle theme against Nyarlathotep in both Innocent Sin and Eternal Punishment continues to develop the same motif which shares the same choir phrases in the opening movie music and Order of the Holy Lance battle theme from the Innocent Sin OST.