Moon
Nozomi Suemitsu is a non-player character from Persona 3. A student at Gekkoukan High School, he goes by "Gourmet King."

Nozomi is extremely obsessed with food, often doing nothing but eating as a pastime. Although Nozomi is afraid of being seen as the "uncool one" while standing next to the protagonist, he does permit him to be a supporter of the "Gourmet King."

The protagonist meets Nozomi after hearing a rumor about a food connoisseur who lurks around Paulownia Mall from Kenji Tomochika after the Magician Social Link reaches Rank 3. Nozomi can be found sitting in front of the central fountain in the mall, usually eating a sandwich. The protagonist cannot speak to him unless his Charm is high enough to distract Nozomi from his sandwich. Nozomi refuses to associate with the protagonist until he can answer questions about food and then bring him food he has never eaten. This food is either an Odd Morsel or Rancid Gravy from Tartarus. He finds it disgusting, but still something he's never eaten.

Nozomi is extremely obsessed with food, often doing nothing but eating as a pastime. During the trip to Kyoto, he eats several bags of Kyoto specific snacks, since he can't eat them all that often. He also explains that a "true gourmand" could never wear a yukata, since they would constantly be loosening the obi due to the expansion of their stomach, which would eventually result in the yukata falling off, leaving the gourmand in the nude.

At first, though Nozomi is afraid of being seen as the "uncool one" while standing next to the protagonist, he does permit him to be a supporter of the Gourmet King. Eventually, Nozomi, who is a senior, allows the protagonist to be his honorary "little brother." Most of the time, Nozomi talks about food he's eating, foods he's eaten, and foods he's going to eat, and he explains how to enjoy food.

Nozomi, in reality, is part of a cult who believes in creating a paradise for believers after the world ends. While he wants to keep it a secret, he does want the protagonist to join him. He asks for 132,000 yen, which is the current going rate for Salvation. When the protagonist refuses, it makes him angry. Nozomi joined the cult because it makes him feel better since he feels he lacks the good qualities his brother had. Nozomi resents everyone because they had made fun of him, trying to force him to be exactly like his brother, and not his own person. Despite his initial anger at the protagonist, he wants him to stay, since he cherishes their friendship.

While Nozomi recruits more worshipers who can come to Paradise after the end of the world, he is accosted by people hired by the middle-aged man who threatened him before. That man's son was scammed by Nozomi, who told the son that he could go to paradise. The hired men intend to beat Nozomi to get the money back. The protagonist arrives in time to save Nozomi, who breaks down and begins crying and apologizing. The hired goons leave, and the middle-aged man just tells Nozomi to stay away from his son. Later, Nozomi tells the protagonist the whole story while eating at Hagakure. He and his brother were fraternal twins, so they were constantly compared to each other. Nozomi felt inferior, since he was fat, sloppy, and lazy, while his brother was athletic, hard-working and good looking. The two of them always enjoyed eating out together, until eventually his brother was killed by food poisoning. Nozomi felt that this was a sign that he would be liberated and would no longer have to compete with his brother. He still emulated his brother, with the hope of finding his special talent. He felt that everyone laughed at him for being the fat kid whose only talent was eating.

Through his interaction with the protagonist, Nozomi decides to be his own person. He passes his title onto the protagonist, making him "Gourmet King The 2nd." He decides to become a food critic to reclaim the title and to make his brother proud. On the day before graduation, the protagonist can meet a reporter interviewing the cook from Hagakure and a barista from Chagall Café. They both praise Nozomi's knowledge of food and his recommendation of the cafe. It is revealed that Nozomi created the Hagakure secret menu item. They both admire Nozomi, and reveal that he will soon be releasing a book on food.

In Persona 3 Portable, if the player chooses to play as the female protagonist, the Moon Arcana Social Link is replaced by Shinjiro Aragaki.

In the movie, he makes a brief appearance inside Wild-Duck Burger.

He makes another appearance, where he is seen hanging out with Makoto at Hagakure.

Nozomi is the Moon Arcana Social Link. He appears at Paulownia Mall every weekday. In the enhanced version of the game featured in Persona 3 FES, he is also available on weekends, holidays, and during the week before exams.

Completing this Social Link will cause Nozomi to hand over the "Gourmet License" which will allow the protagonist to fuse Sandalphon, the ultimate Moon Persona.

Nozomi appears in the manga adaption 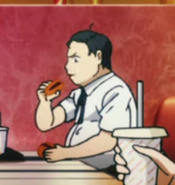 Nozomi's appearance in the movie