Queen of the Fairies

Nozomi is an elegant woman with long blonde hair. Shin Megami Tensei IV Apocalypse reveals her to have hazel eyes.

In Shin Megami Tensei IV, she wears a red leather Perfecto-style motorcycle jacket, red padded pants, black boots and a pair of what appear to be mismatched bracers or elbow-length gloves, the one on her right hand being black and the one on her left being brown.

In Shin Megami Tensei IV Apocalypse, she wears a red leather jacket with a tan cloak, red short shorts, a dark red belt with several shotgun shells, black stockings, red knee protectors and black high-heeled boots. In addition, she wears lime green rimless sunglasses. In the A Trip to Hawaii DLC, she wears a red bikini, red sandals, a wicker sunhat and has a red flower in her hair.

Nozomi is a hunter in Tokyo who also acts a photographer, and appears in multiple Challenge Quests in the game.

Flynn first meets her in the quest, Deliver the Film, where he delivers film to her in an old, abandoned shrine in Ueno where she's taking pictures. While angry that he ruined her last shot, she's surprised that he brought her more film. Nozomi realizes that he wants to know what her camera is; being an amateur photographer, she's more than willing to explain it to him. However, as she's running low on time, she gives him another camera for him to use, expressing hope to see him again before leaving.

After Deliver the Film is completed, a new quest called Samurai and Hunters United will appear after the Samurai visit the Counter-Demon Force Base. Requesting the aid of fellow hunters, she can be found in a room on Ameyoko Way in the Ueno District. Seeing Flynn, she realized he was the one of the Samurai people were talking about. After she joins Flynn, the two of them head off for the Jouhoku Region to take down Asura, confident that the two of them will be enough to crush him. Nozomi is impressed with his skill after the battle, thanking Flynn for his help, as she realized Asura would have killed her had she gone by herself. Before leaving, she mentions that she wants to see what kind of pictures he's taken with the camera she gave him the next time they meet.

A new quest from her can be found in Shinjuku called Serial Kidnapping - Arson after meeting Tayama. She requests the aid of other hunters to deal with the Wicker Man Hordes that are burning people alive in the area, and is happy to once again meet Flynn. She asks him if he's taken any good pictures with it, since one shouldn't spend all their time hunting. She mentions her fellow Hunters tend to suck up to her for requests and call her "Boss Lady," but never come to help her in the quests she makes. She is captured by the Hordes during each battle, angered that it keeps happening, and is rescued by Flynn in each one. The last one she is knocked out after the fight, missing the battle against Cernunnos. She awakens after the battle and learns what happened from Flynn, and admits that he's probably a better hunter than her. Nozomi thanks him for saving her life and gives him his reward, telling him that if anything comes up she'll contact him.

Annoyed that her own strength is not enough to directly enter battle, she requests the Maenad's Wine, an alcoholic drink rumored to make women stronger, in the quest The Great Drunkenness. She asks Flynn to track down Dionysus and get the wine for her.

Eventually Nozomi contacts Flynn and asks for his help in summoning Black Maria to help the fairies holed up in St. Nicholas' Cathedral. When Flynn meets up with her, the fairies reveal that Black Maria, who was once Lady Danu, their mother and leader, told them that they could speak with her again if a human named Nozomi summoned her. While she's perfectly willing to summon the fairies' mother, the angels refuse to allow the ritual; thus Flynn must hold the angels at bay while the black mother comes forth.

Upon defeating the angels, Nozomi reveals to Flynn that they succeeded. Black Maria is summoned but she tells the fairies that she cannot return to being the Lady Danu as she bears her responsibilities as Black Maria as well. Her compromise is to ask Nozomi to take her place as the Lady Danu and when Nozomi agrees the elder goddess transfers some of her power over to Nozomi so that she will eventually rise as the next Lady Danu.

After Black Maria leaves Nozomi mentions that she doesn't feel any different. Regardless, she decides that her first task as the new Lady Danu is to find a new home for the Fairies. Giving her regards to Flynn, Nozomi leads the Fairies away towards their new home where they can live in peace.

Nozomi is the current Fairy Queen and, as a "Hunter," acts as an older sister to the rest of the group and supports Nanashi by acting as a counselor. By the time Shin Megami Tensei IV Apocalypse starts, Nozomi has established a new Fairy Forest in the Yoyogi Region. Similar to how Dagda accompanies Nanashi, Nozomi is accompanied by Lady Danu, or at least a representation of her, that acts as her counselor and teacher.

All of Nozomi's attacks are gun type, except for the 2 ailment/debuff-inducing skills. This makes her very limited to situations where the enemies are weak to gun damage, until she learns her Awakening passive, which grants pierce property to her gun attacks and strengthens her power. Even so, Nozomi can be tremendously helpful because most of her attacks are capable of inflicting certain ailments to the enemies being faced which can be said that these skills can also remove smirks and turns. She is quite a good partner to use during normal fights when facing enemies that do not have any ailment resistances, but is less helpful in boss fights. Nozomi is capable of providing support while the Tokugawa Mandala is active as well.

Nozomi when you first meet her

Illustration of Nozomi and the main characters by Masayuki Doi 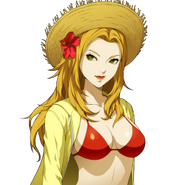 Nozomi as she appears in Brave Frontier.