The Sisters of Fate (P3)

"I am Norn. The Keeper of Fate... Destiny's guide..."
—Norn, DemiKids Dark Version

Norn is a demon in the series.

Norn, also known as Nornir, are the numerous female goddesses who rule the fates of the various races that exist in Norse Mythology. The three most important of the Norns are Urd, Verdandi and Skuld. These three are said to live near a lake under the roots of Yggdrasil, the world tree.

They come out from a hall standing at the Well of Urðr (Fate). They draw water from the well and take sand that lies around it, which they pour over the Yggdrasill tree so that its branches will not rot. These three main Norns are described as powerful maiden giantesses (Jotuns) whose arrival from Jötunheimr ended the golden age of the gods.

Beside these three famous Norns, there are many others who appear at a person's birth in order to determine his or her future. In the pre-Christian Norse societies, Norns were thought to have visited newborn children. There were both malevolent and benevolent Norns: the former caused all the malevolent and tragic events in the world while the latter were kind and protective goddesses.

Norn appears as the final boss of any Shinagawa Ice Cave instance except those created during the new moon period. By defeating her, there is a small chance to obtain Destiny's Chronometer, which will allow the player to fuse her. As in most games, she can be obtained through a fusion of Atropos, Lachesis and Clotho.

"Goddesses of fate in Norse lore.
They live below the roots of Yggdrasil and weave the threads of fate, which bind even the gods."
—Shin Megami Tensei: Strange Journey Compendium

Norn is met as part of the EX Mission, Fateful aid, in the top floor of Sector Eridanus if the earlier EX Mission The madness of Yggdrasil has been completed. She is located in a patch of land recorded in the auto map data which is a logical impossibility considering Eridanus had been until then inaccessible. Upon entering then attempting to leave the room, Norn shows reveals herself to the protagonist and explains the situation; her form before the fusion into Norn was, in fact, the three Disir sisters who the protagonist had met in Sector Bootes.

She explained that she had been the unknown force intervening in his fight against Yggdrasil and canceled the time-based powers he had previously stolen, allowing a second assailant to take down the rampaging tree after the protagonist was previously at the mercy of Yggdrasil. Norn reveals then the second attacker was in fact, the protagonist himself, seasoned and grown from his experiences so he could challenge Yggdrasil on more even terms. Norn then takes the protagonist to the past at Sector Eridanus for a rematch against Yggdrasil to save himself. With Norn supporting the timeline from the future, the violent tree was defeated, completing the ontological paradox, returning her time powers to her earlier selves and sealing Yggdrasil in a cycle of power and defeat he could never escape.

Defeating Yggdrasil unlocks him and Norn for fusion, and grants the protagonist the Nornir Ring.

"Goddesses of fate in Norse lore. They live below the roots of Yggdrasil and weave the threads of fate, which even the gods are bound by."
—Shin Megami Tensei IV compendium

Norn can teach Nanashi the Luster Candy, Dekaja, Samarecarm and Mediarahan skills through its Demon Whisper. It benefits from learning healing and support skills.

"The goddesses of fate in Norse myth.
They live below the roots of Yggdrasil and weave the threads of fate by which even the gods are bound."
—Shin Megami Tensei V lore

"Goddesses of fate in Norse lore.
Giantesses, they live below the roots of Yggdrasil and weave the threads of fate, which even the gods are bound by."
—Soul Hackers 3DS compendium

Norn, "the Sisters of Fate" is the Ultimate Persona of the Fortune Arcana. Once the protagonist has completed the Fortune Arcana Social Link and reached Lv. 62, Norn can once again be fused using the three Moirae Sisters; Clotho, Lachesis and Atropos.

Norn is the only Persona to initially learn the most powerful single-target Wind skill in the game, Panta Rhei.

Norn returns as the ultimate Persona of the Fortune Arcana. They are available to be summoned once the protagonist reaches Lv. 72 or above and completes the Fortune Arcana Social Link (Naoto Shirogane's). Similar to its predecessor, Norn's fusion prerequisite requires the special fusion of Clotho, Lachesis and Atropos in the Velvet Room. However, Norn no longer learns the skill Panta Rhei, as Odin now learns the skill; to make up for this, Norn holds the distinction of being one of the two Personas (the other being Trumpeter) in the game that naturally learns the skill Debilitate.

Norn can only be fused using Clotho, Lachesis and Atropos, once the current protagonist has reached level 66 or higher.

"Goddesses of fate in Norse lore. They live below the roots of Yggdrasil and weave the threads of fate, which even the gods are bound by."
—Persona 5 Compendium

Norn is the sixth Persona of the Fortune Arcana and can be found as a Shadow in Niijima's Palace and the Sheriruth area of Mementos, with the title "Final Measurer." Norn is the first Persona that the protagonist can use in battle that learns Ziodyne and Garudyne, as well as one of the four Personas to learn Nocturnal Flash and Amrita Drop. When itemized using Electric Chair execution, Norn will yield a Diarahan skill card.

Norn is fought in the Members Floor Lobby of Niijima's Palace. After the Phantom Thieves rig the Dice Game and Slot Machines in their favor and obtain the High Limit Card, the Shadow will be waiting for them in front of the elevator.

Norn is the overseer of the Orgel Room and the administrator of the Ragnarok and Armageddon programs. In the past, Norn created the Keys of Norn, which are necessary to activate either program.

"An immortal demon that physically exists in the past, present, and future."
—DemiKids Demonary

After recruiting the Three Time Maidens and beating the game, go back to the temples where Lucifer talks with Darklord/Lord Light. The three will fuse together to become Norn in the same room the discussion happened. It is also possible to earn a Norn by doing the Battlenet Tournament, which requires one battle against 100 opponents in a row.

Norn can do the dark type combo attack Doombringer with Ankuu, which does no defense damage for 25 MP.

"Goddesses of fate in Norse lore. Said to be giantesses.
They live below the roots of Yggdrasil and weave the threads of fate, which bind even the gods."
—Shin Megami Tensei: Devil Survivor 2 compendium

Norn can be purchased for 1,500 Democalypse Coins

Norn as she appears in Shin Megami Tensei: Strange Journey

Norn, right behind the "door of destiny"

Norn as she appears in Card Summoner

Norn as she appears in Persona 4 The Golden Animation 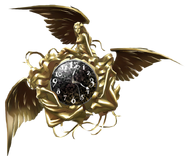