Noah is a demon in the series.

To advance his Reason of Musubi, Isamu Nitta uses the Magatsuhi gathered at the Amala Temple to summon a nameless god as his Demonic Sponsor. According to Isamu, this entity has been so far removed from the time stream that its original name has been entirely forgotten, a testament to the absolute solitude that Musubi represents. However, Isamu believes it would be inconvenient for his Sponsor to remain nameless, so he decides to christen it Noah. Isamu then hibernates inside Noah's head, encased in a red, transparent shell.

Noah will be fought in all paths except the Musubi-aligned path, where he is slain by Baal Avatar. He yields the Netherstone upon his defeat. Noah's location does not directly block the passage to the next section of the tower, so it is possible to bypass him and head straight to the shop after him to buy the Kailash Magatama in order to learn Freikugel, which is especially helpful against Noah when empowered by Pierce. However, the Demi-fiend still requires the Netherstone to gain access to Kagutsuchi; this just allows the meeting with Noah (whether it results in a battle or not) to be pushed a bit later before facing Kagutsuchi.

If it fights the Demi-fiend, Noah begins the battle by using its regular attack (which deals Almighty damage), with its only resistences being instant death and ailments. However, after taking some damage, Noah begins to cast its signature skill, Aurora, at which point it takes 90% less Almighty damage, repels Physical, and also repels three of the four magical elements. Every turn, Noah will cast Aurora followed by an elemental -dyne spell, cycling between the elements in this order: Fire, Ice, Electric and Force. The one element that Noah doesn't repel is the opposite of the element it uses: for example, when it casts Agidyne, it is vulnerable to Ice. Essentially, Noah's vulnerability changes in this order: Ice, Fire, Force and Electric.

After taking enough damage, Noah's form changes and Isamu's visage, complete with his hat, becomes visible on the demon itself. At this point, Noah resets its Aurora cycle and starts casting Ma-dyne spells to increase its damage output. However, in place of the Ma-dyne spells, it may instead cast Dekaja, Dekunda or another unique skill, Domination, which drains a lot of HP and MP from one target. These skills essentially hide Noah's vulnerability, forcing one to remember where it is in the Aurora cycle or be punished by repelled attacks. 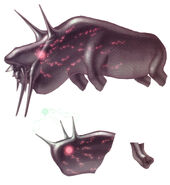 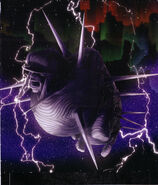 Retrieved from "https://megamitensei.fandom.com/wiki/Noah?oldid=405980"
Community content is available under CC-BY-SA unless otherwise noted.