Nike is a demon in the series.

Nike is the the goddess of victory, strength, speed and war in Greek mythology and the archetypal portrayal of the Abrahamic angels. As the deity of victory, Nike's greatest feat was in the Titan War, in which she served as the gods' personal charioteer. It is said that without Nike, the gods couldn't have won the war with the Titans.

Nike was also at one time considered to be part of Athena. Gradually, Nike was broken away from Athena and eventually blossomed to be her own individual goddess. In artwork and sculptures of Nike, the goddess of victory that was bound to Athena was always wingless, whereas Nike as her own goddess was often winged.

She is often associated with the Roman goddess Victoria.

Nike is the result of fusing Valkyrie with Aello, Ocypete or Celaeno.

Nike is a Persona of the Judgement Arcana and the initial Persona of Eriko Kirishima. Nike awakened when Eriko was attacked by zombies at the hospital shortly after Yamaoka's death. When returned to the Velvet Room at MAX Rank, Nike yields a Dx Incense.

Nike returns as Eriko's initial Persona. When returned to the Velvet Room at MAX Rank, Nike yields a Rakukaja Card.

Nike is a boss early on in the story, where she attempts to crash the train that leads to the Expanse Gate. When confronted by Masaki Kuzuha, she reveals she is doing it to prevent him from interfering with the angels' plans. She vanishes upon defeat and Masaki is able to prevent the train from crashing.

"A demon with an angelic voice for singing sweet songs of victory."
—Demonary, DemiKids 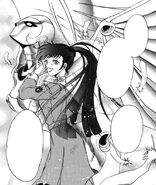 Nike as she appears in the Megami Ibunroku Persona manga