Demon Sword Nihil (妖刀似蛭) is fictional sword in Osamu Tezuka's manga series, Dororo. Nihil is one of the 48 demons that devoured the protagonist Hyakkimaru's flesh when he was an infant. It's a living demonic sword that possesses its user, causing the user to turn into a berserk warrior to sate its bloodthirst.

A Nihil blade can be acquired in Ueno. By walking counter-clockwise around the statue near the center of town, the protagonist gets transported to a small, isolated island the Expanse where the Nihil is thrust into the ground. In Kyuuyaku, by returning here again after speaking with Lucifer, the Hinokagutsuchi will be found.

Nihil is a sword that can be purchased from the black market in Ueno for 5,620 Macca once the shop becomes available. The sword has an attack power of 92 and has a chance of inflicting the Panic status when striking an enemy.

The Nihil weapons are a base required for fusion weapons and are not usable until fused with a Persona.

Nihil is a weapon for P5 hero. It can be purchased from the Workshop for ¥40,500 after selling one Balance Cache, dropped by World Balance, and two Pesce Air Sacs, dropped by Pursuing Pesce. 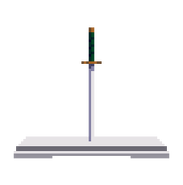