Nidhoggr is a demon in the series.

Nidhoggr (literally meaning Malice Striker in Old Norse), also spelled as Nidhogg, in Norse mythology is a dragon serpent that gnaws at the roots of the World Tree, Yggdrasil. He lives beneath the roots of Yggdrasil and gnaws at them as they are the only thing that keeps it from the world.

The squirrel Ratatoskr brings words of envy between Nidhoggr and the eagle Hresvelgr. The only person capable of controlling him is the goddess Hel. Its existence is the portend of the Ragnarok that signals the end of all.

Nidhoggr appears as an optional boss in the Tower of Daedalus, in the second Devil Busters game that appears in the Intelligence Building in Shibuya. Defeating him rewards the Devil Analyzer, which shows info about the last five* demons that have been encountered.

"A dragon of Norse mythology, sometimes described as a snake. Its name means "one who burns with rage." It is usually depicted as a all-black dragon with huge wings.
Nidhoggr lives with many other serpents in the spring of Hvergelmir, in Niflheim. It continually gnaws at the roots of the world tree Yggdrasil, tipping the balance of the world toward darkness.
Nidhoggr is the bitter rival of Hraesvelgr, the great eagle who lives at the top of the tree. The squirrel Ratatosk acts as a go-between in their never-ending quarrel. Ratatosk takes the messages they send to each other and exaggerates them, twisting their words into cruel taunts. It enjoys egging them on so much that they two will never be friends.
At Ragnarok, the end of the world, Nidhoggr and Hraesvelgr are fated to eat every one of the souls that die."

Nidhoggr can be contracted in Ueno at night and in Kuchinawa Cave during the day. He acts as the final boss of Shinagawa's Catacombs of the Templar Knights during the new moon phase, replacing the normal Hresvelgr boss. Nidhoggr is one of the demons that can be mounted in game.

"An evil dragon who gnaws on the roots of Yggdrasil, the World Tree. It rules over the evil snakes that live there. It is capable of living through Ragnarok by feeding on the slain corpses that drift to it."
—Shin Megami Tensei IV Apocalypse compendium

Nidhoggr can be found in the Firmament areas of the Sky Tower. Nidhoggr can teach Nanashi the Grand Tack, Poison Breath, Madness Nails and Eat Whole skills through its Demon Whisper. It benefits from learning Ice, Physical and Gun skills. Due to its Dexterity, it will benefit more from the Gun skills over Physical skills.

"An evil dragon that gnaws on the roots of the Yggdrasil, the World Tree. It rules over the evil snakes that live there. Capable of surviving Ragnarok by feeding on the slain corpses that drift to it."
—Persona 3 FES compendium

"An insatiable dragon-demon that will feed on anything that may stray in its path."
—Demonary, DemiKids

Its first appearance is as the boss of the Blue configuration of the Brutes Base in Ajna. Upon entering the chamber, five Brutes members will transform into small Nidhoggr to start the battle. The middle Nidhoggr is the main boss and will try to consume the smaller ones to become larger. If all the smaller ones are killed, it will use Rage to summon another small one, which will either attack or use Reinforcements. 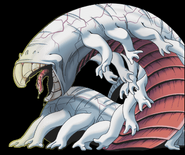 Nidhoggr as he appears in Persona 4 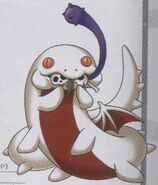 Nidhoggr as he appears in Card Summoner
Community content is available under CC-BY-SA unless otherwise noted.
Advertisement