Nemesis, also called Rhamnousia or Rhamnusia ("the goddess of Rhamnous"), was the ancient Greek goddess of divine retribution against those who succumb to pride and arrogance. Also, she is the daughter of Erebus and Nyx.

It is also believed that Nemesis produced the egg from which hatched two sets of twins: Helen of Troy and Clytemnestra, and the Dioscuri, Castor and Polydeuces. The reason they hatched from an egg is because, in order to avoid Zeus, Nemesis turns into a goose, but he turns into a swan and mates with her.

One of her acts of retribution was to punish the beautiful Narcissus for spurning his many suitors. Nemesis caused him to fall in love with his own reflection in a pool of water, which led him to perish there from despair and regret.

Nemesis appears as the boss of the Nemesis Tower in the Snow Queen Quest, and is the Persona of Michiko Matsudaira. As a ploy to stall for time, thus allowing Nemesis to grow in power as the tower's prisoners are tortured further, Michiko gets rid of the time limit for her tower. Either way, when she is found, Michiko transforms into Nemesis with a speech saying to "Lord Nemesis... Be the shield that protects me!" and "Be the sword which vanquishes my foe!".

"An inscrutable demon whose vengefule nature is legend among those who've felt his wrath."
—Demonary, DemiKids

Nemesis has the power Fog LV, which makes dodging attacks easier. The power levels up the more he fights.

Concept artwork of Nemesis of Persona 3

Concept anime artwork of Nemesis in Persona 3 The Movie 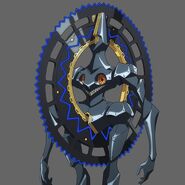 Concept movie artwork of Nemesis in Persona 3 The Movie

Nemesis in Persona 3 The Movie

Nemesis in Side P3

Artwork in DemiKids
Community content is available under CC-BY-SA unless otherwise noted.
Advertisement