Nemechi is a special demon in the series.

Nemechi does not aid the protagonist directly in battle. Instead, it is a program on the GUMP that grows stronger every time the player uses the Nintendo 3DS's StreetPass feature. As more StreetPasses are collected he slowly changes into new forms. One can also use Play Coins and trade those for D-Souls. D-Souls are what is required to evolve Nemechi.

As Nemechi evolves, it will randomly become male or female until it reaches its final form, after which it will be possible to devolve it back into its original form. The chances of it evolving down a certain path decrease each time that it happens. When Nemechi evolves, it also unlocks the demons added to the remake. Each evolved form unlocking one or two different demons. Among these are alternate versions of demons in the game such as Odin or Thor, as well as demons that weren't in the original like Douman, Dormarth, or Lucifrost. 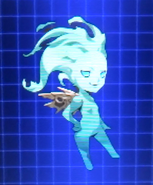