Neko Shogun is a demon in the series.

Neko Shogun is a divine general in the image of a cat. Originally, he was a Chinese general who conquered Vietnam: Mao Shangshu (毛尚書). The people decided to dedicate a temple to him and worship him as god. However, due to the surname Mao (毛) sounding very similar to the Chinese word for cat (貓), the temple was accidentally misnamed. Thus, the Temple of General Mao became known as Temple of General Cat (貓將軍).

"The god of prophecy in Taoist religion.
It is said to have the head of a cat and the body of a human, and its shrine was located in Annam, which is present-day Vietnam. The shrine was meant for Mao Shangshu, a 14-15th century general who conquered Vietnam. However, because the name "Mao" is similar to the Chinese word for cat, the temple was effectively misnamed, and he was reborn as a different god. It should also be noted that there is a similar story about the god of sailing known as "Tetsu Neko Shogun.""
—Shin Megami Tensei V lore

Neko Shogun is a demon of the Wargod race and can be fused through a combination of Pixie and Slime once the protagonist reaches level 5.

Amanozako will direct the protagonist's attention to a Neko Shogun while traversing Hamamatsucho, leading to the subquest "No Stone Unturned," in which the protagonist must collect 5 Life Stones to give to Neko Shogun. Completing the quest will lead the Neko Shogun to granting the Wargod Talisman key item to the protagonist, which allows any demon of the Wargod race to use the Freikugel EX Magatsuhi skill, including Neko Shogun. While Neko Shogun does not appear as a normal enemy, it is possible to acquire Neko Shogun's Essence by reporting to Gustave after finding 15 Miman.

Neko Shogun is one of the new Personas added to Portable from Persona 4. He's available to be summoned when the protagonist reaches Lv. 19 or higher. To fuse Neko Shogun, Pyro Jack, Lilim and Pixie are needed. Alternatively, it is also possible to fuse Neko Shogun using Mokoi, Hua Po and Pixie.

Neko Shogun is one of the many Personas summoned by Margaret during her ultimate boss fight.

Neko Shogun is available to be summoned when the protagonist reaches Lv.32 or above. Neko Shogun's fusion prerequisite requires the protagonist to perform a cross spread fusion consisting of Saki Mitama, Ara Mitama, Nigi Mitama and Kusi Mitama. Advanced fusions like Neko Shogun's can only be performed after July 11th.

In one of the requests in the Empress Arcana Social Link, Margaret requires the protagonist to present her with a Neko Shogun with the skill Bufula. The easiest way to do so is to create a Kusi Mitama with the Bufula by fusing King Frost, which innately has Bufula, together with Hua Po.

"A prophetic taoist god, originally known as Mao Shogun. Due to a linguistic error involving the Chinese word for "cat," his name was changed to Neko Shogun."
—Persona 5 background

Neko Shogun is the third Persona of the Star Arcana and can only be obtained through advanced fusion in the Velvet Room. He is the first Persona to learn Invigorate 1 and Fortified Moxy and the second of two Personas to learn Cornered Fang. When itemized through Electric Chair execution, Neko Shogun produces the Catnap slingshot for Morgana, which has 168 ATK, 90 ACC, can fire 5 times per turn and adds the Sleep med effect to Morgana's Gun attacks.

The ability to fuse Neko Shogun is unlocked at Rank 1 of the Strength Confidant, which can be started by talking to Caroline and Justine starting on 5/18. The task they give the protagonist is to show them a Jack Frost with Mabufu, which he learns at level 12.

Known as Shogun, he has the power Deadeye.

"A prophetic Taoist god, originally known as Mao Shogun. Due to a linguistic error involving the Chinese word for cat, his name was changed to Neko Shogun.
He has the body of a human and the head of a cat. His tomb is said to be located in what is now Vietnam."
—Devil Survivor 2 compendium

Neko Shogun spawns as a boss in the very last wave of enemies when the protagonist, Makoto Sako and Otome Yanagiya are trying to survive being trapped in one of JP's underground train stations. He is unlocked for fusion after being defeated. Neko Shogun is a unique demon, only available through the special fusion between Nekomata and Thor. 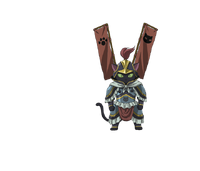 Neko Shogun appears as a demon under the ownership of Jungo Torii, most likely as a symbol of Jungo's love for cats and his Fate events in the original game.

Jungo first summons it in a skirmish against a rebel mob in the JP's headquarters in Nagoya, and fights alongside Airi Ban's Cait Sith. Neko Shogun is shown to be very powerful in comparison to other demons, as the rebels' demons were quickly destroyed in the battle. It specializes in close combat and physical assault rather than magic. However, it could not do significant damage to Phecda and was destroyed alongside other fellow demons by Phecda's beams.

It is also used to fight off the other Septentriones, the next being Megrez. Though Neko Shogun's attacks seem effective against it, Megrez's recovery powers allowed it to recover from the damage fairly quickly. Neko Shogun also contributed in a full-on attack against Benetnasch alongside other demons, but it later gets forcibly returned to its cell phone due to this Septentrione's demon-revoking properties.

Neko Shogun as he appears in Devil Survivor 2

Neko Shogun as he appears in Card Summoner

Neko Shogun as he appears in Devil Survivor 2: The Animation

Neko Shogun as he appears in Persona 5 Royal

Neko Shogun as he appears in Persona O.A.

Neko Shogun as he appears in Persona O.A. (No Background)