Erica Lindbeck
"What denies you is an illusion... A curse put upon you by the heartless... You knew from the very beginning... And yet, you cowered in fear...
Will you die as you are told...? Who will you obey...? Cursed words spat out by a seething illusion? Or the truth within your own soul?
Contract...I am thou, thou art I...The forbidden wisdom has been revealed. No mysteries...no illusions shall deceive you any longer."
—Necronomicon, Persona 5

Necronomicon is a Persona in Persona 5.

The Necronomicon, whose original name is Al Azif, is a fictional grimoire, or tome of magic. It was first mentioned in the short story The Hound written by H. P. Lovecraft, but its exact origin is the subject of debate. The book subsequently also appeared in stories of Lovecraft's followers. The Necronomicon has since gained a cult following and various fake "replicas" of the book are circulating.

In the context of Lovecraft's works, the Necronomicon is a tome detailing the truth behind the various ancient cosmic beings that have inhabited Earth and continue to influence humans for their own ends. Written in the 8th century by the "mad Arab" Abdul Alhazred, it both functions as a means of imparting the forbidden knowledge of the ancient ones, and a source of danger as those who read it risk going mad from its knowledge.

"The grimoire which contains vital information of the Cthulhu mythos by Lovecraft. Its original name is Al Azif. It is said the book itself is alive."
—Persona 5 compendium

Necronomicon is Futaba Sakura's Initial Persona, formed when she regains her will to live and accepts a consenting Shadow Futaba. It is shaped like a UFO with a metallic Gargoyle statue crouching on its top. The UFO's exterior is decorated with lime green glyphs of various origins. Futaba is piloting from the inside. This Persona symbolizes Futaba's unknown power and vast reserves of knowledge.

After Futaba joins the party, the book Cry of Cthulhu can be borrowed from the Shujin Academy Library. It's based on the origins of Necronomicon, and boosts the Guts stat.

Necronomicon is a Navigator Persona with a limited array of skills by itself. However, by progressing Futaba's Confidant, more abilities can be used through it, including ones that can aid in battle or ambushing Shadows.

Close-up of the gargoyle statue

Necronomicon in the Persona 5 anime adaption.

Character art of Necronomicon in Persona 5 Strikers with Futaba

Necronomicon in Persona O.A. (No Background)

Appearances in Other media[] 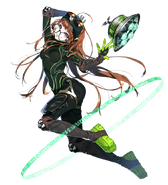 Futaba and Necronomicon in Puzzle & Dragons

Kanan Matsuura in her Necronomicon outfit