Risako Torigoe
"You're a weird one, y'know? The biggest bitch in the school is leaving, and you feel sorry for her."
—Natsuki to Fuuka about her transfer, Persona 3

Natsuki Moriyama is a non-playable character in Persona 3.

In the Persona 3 The Movie, she wears the winter school uniform and a gray sweater jacket.

"Empty texts are annoying, you know. If you've got something on your mind, I'm here to listen. Because you and I are always connected."
—Natsuki to Fuuka in a text message, Persona 3 The Movie

In the beginning, Natsuki is a rough, cruel and mean student who is generally unpleasant and unlikable with no redeeming qualities. Natsuki and her friends had taken up bullying Fuuka Yamagishi, eventually thinking it would be fun to lock her in the school gym at night as a prank. She claims she enjoys messing with Fuuka because it's "fun" and "Fuuka is easy to mess with."

After the Full Moon mission is complete, Natsuki is remorseful of her actions, calling herself the biggest bitch in the school, and changes for the better. She befriends Fuuka out of genuine kindness, although still occasionally teases her (albeit in a playful manner).

Natsuki Moriyama first appears as one of a group of girls who have been bullying Fuuka Yamagishi. Shortly before the third full moon on June 8th, she relates to the party and Mr. Ekoda that the girls had locked Fuuka inside the gym overnight, but when they went to to retrieve her, Fuuka had disappeared. A rumor spreads between Natsuki's group that Fuuka escaped and killed herself by suicide, and in fear of being in trouble for potentially bullying Fuuka to the point of suicide, Natsuki's group searches for Fuuka to no avail.

During the Dark Hour on the night that SEES went to rescue Fuuka, a Shadow's voice in her head called out to her, luring her to Tartarus. The Shadow summoning Natsuki is the reason why Natsuki wasn't transmogrified. After the shadows Arcana Emperor and Arcana Empress are defeated, Natsuki apologizes to Fuuka for harassing her. The two later become friends, though Natsuki had forgotten about Fuuka saving her life in Tartarus.

Thanks to Natsuki, Fuuka becomes stronger and more optimistic, which her fellow dorm mates notice quickly. Natsuki often studies and goes shopping with Fuuka, and they go to the movies together during the Film Festival. Later in the game, Mr. Ekoda announces that Natsuki is transferring because her father is ill and they cannot afford to stay in town. She tells Fuuka that no matter how far away they may be from one another, they will always be friends. Fuuka's Persona then evolves into Juno, and Yukari and the others find her on the school roof after Natsuki leaves. She compares Junpei's situation with Chidori to hers with Natsuki's: even if they are apart, they are together.

Near the end of the game, Natsuki is seen encouraging Fuuka during The Fall as she remembers Fuuka had saved her in the past.

Natsuki closes her eyes as Fuuka saves her 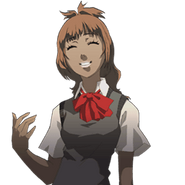 Natsuki in the manga

Natsuki in Persona 3 The Movie