Narasimha is an avatar of Vishnu, a deity in Hinduism. The story goes that Vishnu had killed the Asura Hiranyaksha. Hiranyaksha's brother Hiranyakashipu was angered by this, and vowed to kill Vishnu. To do so he must gain immense mystical powers, which he believed will be given by Brahma if he underwent many years of penance. Brahma was pleased with Hiranyakashipu's efforts and granted him a boon, in which he asked for protection from death by human, deity or animal in any space by any weapon in any time. With the boon he attempted to kill Vishnu, but Vishnu took upon the avatar of Narasimha, part deity, part animal, and managed to slay Hiranyakashipu.﻿

"Origin: India. One of Vishnu's ten avatars. He is a human with a lion's head. Hiranyakashipu, the immortal king of the Rakshasas, tried to kill his son. Narasimha defeated Hiranyakashipu in retaliation."
—Shin Megami Tensei A-Mode DDS dictionary

Narasimha can only be acquired through fusion. He is particularly notable for being one of the few demons that gain a powerful suicide affinity attack boosting feature after Mitama fusion. He appears with Vishnu when he acts as a boss.

An Angel of Muspellheim, he is faced as a boss in Ice Book. Narasimha is the angel who disguised himself as Berith earlier in the story. Along with his disguised comrade Ictinike, they would seal away Zebul as a statue in Muspellheim. He will later be fought in his true form in the destroyed Future Harajuku, where he stands guard of the Gate and shows Akira the world sacrificed for the sake of the eternal battle. Upon his revival after beating the story, Narasimha will stay in the entrance to the Deep Hole.

After the first floor of the 5th Layer of the Sun, Narasimha becomes a reoccurring enemy in the following floors on the Sun dungeon. He often attacks preemptively with Ragnarok and/or Gate of Hell. If defeated, he has a chance of dropping the Nandaka, a special item that is needed to unlock the door to Vishnu's chamber in the 6th Layer of the Sun. 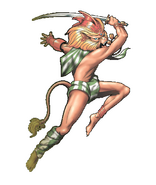 Narasimha as he appears in Persona 4

Narasimha as he appears in Card Summoner
Community content is available under CC-BY-SA unless otherwise noted.
Advertisement