Naoki has short brown hair and blue eyes. He wears a baggy green padded jacket, jeans with one knee-pad, sneakers, and a headset. He carries a long sword.

A member of the military group Partisan, he and his comrades attempt to fight the demons that have invaded Tokyo. Naoki is 23 years old. He is able to wield longswords, daggers, and guns.

Naoki's father was a scientist who worked for the government. He was a genius, capable of creating a time machine. He perishes in an explosion, and while the event was labeled an accident, Naoki believes his father was killed intentionally. Soon after his father's death, demons invade Tokyo in large quantities. To get his revenge, he joins the group Partisan, alongside his comrades Tomoharu Kikuchi and Kaoru Tachibana. He learns the man responsible for the demonic invasion is a mysterious man named Masakiyo Ogiwara, who has the power to control demons. Naoki learns of the demon summoning program, DIO, from a mysterious woman named Karen Rose in his dreams.

After the Partisan base is destroyed, Naoki runs into Tomoharu's younger sister Aya, and she becomes his ally. After finding her brother, she decides to join the team for good. Sometime after this, Naoki and his friends end up in the post-apocalyptic Tokyo of 2024, only to wind up in 1995 - the year before the demons invaded. Later, he and his friends will travel even further to the city of Megalopolis of 2052, the home of Karen. Depending on the player's choice, either Karen or Ogiwara (who turns out to be attempting to avert the crisis that destroyed Tokyo in 1996, and is from the world of Amnesia, a magical realm) will join.

Naoki's fate changes depending on the ending. 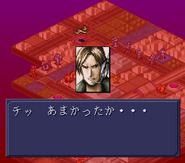