Derek Stephen Prince
"There's a river separating us... Sis is gone, and I'm still here. Sis has crossed on over to the other bank, and I'm still on this one... No matter how much I cry or piss my pants, I know Sis isn't coming back..."
—Naoki Konishi, Persona 4

Naoki Konishi is a character in Persona 4. He is a first-year student in Yasogami High School and Saki Konishi's younger brother.

Naoki has wavy, slicked-back light brown hair, gray eyes, and a sharp nose. At school he wears the usual school uniform of Yasogami High except he wears a long sleeved blue shirt underneath. In Persona 4 The Animation he has slightly darker brown hair.

Naoki can't move forward from the death of his older sister, Saki. He is emotionally distant and numb to his classmates and neighbors due to being pitied and gossiped about respectively. At times, he is unsure if what he is doing in school is right or wrong due to his classmates lacking the heart to fault him for his actions due to his family situation. He hated Yosuke (possibly because he encouraged Saki to work for Junes) and therefore the protagonist for being friends with Yosuke.

However, once the protagonist starts talking to him, he appreciates how the protagonist listens to what he has to say and doesn't force advice on him. He eventually feels grateful to the protagonist for helping him to move forward with his life and tosses his hatred for him and Yosuke aside.

The protagonist can first see Naoki talking with his sister on the very first day he arrives in Inaba, overhearing them arguing about how Saki ate Naoki's food. Their family owns the local liquor store, which is in danger of being closed down because Junes also sells liquor at lower prices. At the beginning of the story, the Konishi family experiences tragedy due to the sudden murder of Saki.

The protagonist first meets Naoki during his "volunteer" work for the student health association. Naoki rudely says how he hates the protagonist and Yosuke Hanamura straight away, then asks if he can leave. The protagonist can later talk to him on the first floor of the classroom building as he stares out of a window opposite class 1-1.

Naoki has been keeping to himself his grief in losing his sister, unable to fully move on from the event. To make matters worse for him, everyone pities him in school, allowing him to get away with tardiness and not participating in events due to sensitivity for his loss. The rumors flying around about Saki working for Junes also do not help the situation and Naoki has become numb to it all. He strikes up a conversation with the protagonist, the first person to talk to him honestly without pity.

Through their Social Link, Naoki opens up about his relationship with Saki, such as Saki's tendency to eat creampuffs that he would buy, defending herself stating that they were going to expire. Naoki's first sign that Saki was not coming back was when he saw a creampuff that he bought actually expired. Naoki has trouble expressing his sadness, even stating that he is abnormal for not crying or at least in the same manner as people on the TV. He finally musters the courage to go to the location where Saki's body was found, a place he had yet to go, finally allowing him to release months of torment and suffering. It is here, Naoki finally mourns his fallen sister and accepts her death.

Finally, he takes the protagonist to the Riverbank, and tells him a story of when he and his sister were little. Saki had bravely crossed the river by jumping from stone to stone, but Naoki was too scared to follow her. Saki then snuck back across and scared him from behind. He tells the protagonist that he realizes that his sister has crossed a different kind of river and that he can't follow her. Even so, he finally feels that he can move on and help his family to unite once again. As his show of thanks, he gives the protagonist the Junes Receipt, allowing him to create the Persona Attis, the ultimate form of the Hanged Man Arcana. He also states that he finally told his classmates to stop giving him special treatment, bringing all of his problems to closure. At the end of the story, with his Social Link maxed out, Naoki has completely moved on with his life and vows to invest in his family's business so they can flourish despite the competition from Junes. He even plans on taking courses in college about making beer to further help his family.

In Episode 8 he meets Yu during the school camping trip and is asked for some antacids for Yosuke. He is childhood friends with Kanji Tatsumi yet they don't talk often and are in different homeroom classes. Naoki is forcefully dragged back to the group by Kanji because the group wants to ask him some questions. He apologizes and warms up to Yu and Yosuke and hopes that they can hang out before he leaves to go back to the Health Association club tent.

In Shadow Mitsuo's illusion where Yu lost his friends, he is seen hanging out with Kanji in the Aiya Chinese Restaurant talking with him about everyone else in the Investigation Team.

In the opening intro, Naoki and Saki are seen with Naoki arguing with her about eating his cream puffs. 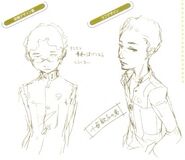 Naoki Konishi in Persona 4 The Animation

Naoki conveying his hatred towards Yosuke and Yu

Naoki hanging out with Kanji