Kaiji Tang
"You help me out with my "business"... Smugglin' goods, destroyin' evidence... And as a reward, I'll introduce you to the "special menu," with good prices for a punk like you. ...Whaddaya say? Not bad, huh?"
—Munehisa Iwai to the protagonist, Persona 5

Munehisa Iwai is a character in Persona 5. He is the owner of Untouchable Airsofts, who supplies the protagonist weaponry and armor. He's also a former yakuza, which he keeps secret from his adoptive son, Kaoru.

Munehisa is a middle-aged man with short gray hair and gray-colored eyes, faint noticeable stubble, sideburns and earrings. A tattoo of a gray-colored gecko is on the left side of his neck near the back. He usually has a lollipop in his mouth.

He wears a gray pin-striped hat with yellow ear defenders, a black turtleneck sweater, a long gray coat with a red peace symbol on the left hem of his coat, simple blue jeans and black leather boots.

Munehisa Iwai is the owner of the airsoft shop, "Untouchable" in Shibuya. When the protagonist asks him about the "real" firearms, Iwai shows interest in his motive, says he dislikes the police and offers to supply the real stuff in exchange for the protagonist assisting him in shady activities. He is responsible for the selling of weaponry used by the party, the pawning of items found in Palaces, and when the Phantom Thieves steal a treasure, they pawn the treasure off to him. Building up a Confidant with him makes him offer a discount for the protagonist.

Iwai grew up with a single mother who lived a self-destructive lifestyle, and the lack of a loving family led him to quickly join the yakuza. There, he became sworn brothers with Tsuda in the Hashiba, who is now a rival of his. Several years ago, Iwai was approached by a woman who attempted to sell him her infant son for drug money; when he refused, she abandoned her son and fled. Iwai subsequently adopted the baby and named him Kaoru. Not wanting his son to suffer the way he did as a child, he was forced back into civilian life and runs Untouchable to support him. Iwai did not have the heart to tell Kaoru about his past or how his father was involved with the yakuza, instead telling him that he was a family friend who adopted him after his parents died in a car crash.

After Mementos starts appearing in the real world, Iwai wonders what's going on and worries about Kaoru.

"It seems you had model guns in your possession as well. Their detail goes beyond a simple hobby. I'm sure some people believed those guns were real. You'll tell me how you procured them won't you? ...Spill it!"
—Sae Niijima talking about Munehisa Iwai, Persona 5

Iwai's story revolves around his job as a storeowner handling special orders and his responsibility as a single father taking care of Kaoru. The protagonist finds employment with him under the pretense of being a gun enthusiast, helping him out with a deal involving his half-brother Tsuda who has been extorting him to do illegal firearms customization for a massive deal. It is later revealed that Tsuda had made a deal with overseas gang members in Hong Kong that resulted in him getting swindled of his money; having promised his superiors weapons, he looked to Iwai. Iwai later confronts Tsuda over the issue, but Tsuda is not swayed and pulls a gun on him, threatening his life. Iwai is well aware that Tsuda was going to kill him regardless but chose to comply to for Kaoru's sake. The Phantom Thieves then change Tsuda's heart, who repents and admits that he was losing his place in the organization to the younger members.

Iwai was about to begin on the orders when Tsuda called and canceled the request. However, Tsuda's subordinate, Masa, tries to take Tsuda's spot and kidnaps Kaoru, threatening his life. Iwai then confesses the truth to him before Tsuda arrives, visibly annoyed at Masa for snitching on him. At the end of the confidant, Iwai gains the full trust of his son and is given a Gekko Pin, symbolizing the protection of one's home and family. Iwai also realizes that the protagonist's claim to appreciate guns was a lie and that he is a Phantom Thief, but seeing that the group helps those in need and they're using his guns to fight evil, continues supporting their cause and keeps his identity as a Phantom Thief secret.

Iwai's shop is inaccessible in this game, and most of its functions are available Sophia's Shop. Iwai himself does not appear: while a sign on the outside of Untouchable indicates the store is closed temporarily, the sign appears to have been there for some time. 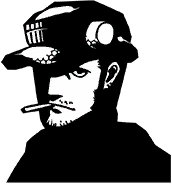 Iwai in the shop menu 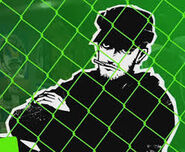 Munehisa Iwai talking to the protagonist 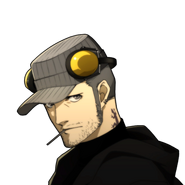 In Persona 5 Royal, there is unused dialogue that was meant to be triggered after the protagonist sells the medal to Iwai, where the protagonist seemingly tries to sell him a Will Seed. Iwai takes a look at it and says that it's "super gross." He then tells the protagonist that he's not in the market for those sort of things but he recalls that there is somebody who's into those sort of items "somewhere in Kichijoji." Iwai tells him to put it away before he gives the protagonist a bag for thanking him for selling that medal. This "somebody in Kichijoji" is never elaborated on and no one in Kichijoji has anything to do with Will Seeds in the final game, but two possible candidates for this might have been Trader Sakai or the secondhand clothing store, both of who trade in strange articles.