Mother Harlot is a demon in the series.

Mother Harlot, also known as "Babylon the Great, Mother of Prostitutes and Abominations of the Earth," "the Whore of Babylon" or the Harlot for short, is an allegorical and apocalyptic figure of evil and one of several incarnations of evil that is said to plague the world during the end days as written in the Book of Revelation. She is depicted as a beautiful woman who is "the mother of all harlots and of all abominations of the world." While incredibly powerful and terrifying, she is destined to meet her end at the hands of The Beast as part of the apocalypse.

She appears as wearing a purple robe. The color purple was associated with the Roman Empire. The beast she rides has seven heads and Rome has seven hills, so the heads could reflect the ancient power of Rome, which traditionally was one of antiquity's most powerful empires. Alternatively, the heads of the beast could represent the seven great kingdoms of the ancient world and their rulers.

One interpretation is that the seven heads represent the seven different forms of Roman governance: kings, consuls, decemviri (council of 10), dictators, triumviri (council of 3), caesars (military emperors) and despotic emperors. She is also probably a reference to Dante's Divine Comedy, Canto XXXII of the Purgatory, in which a chariot representing the History of the Church becomes a seven-headed-beast with a prostitute on his back. This event in the Comedy is a symbolism of corrupted popes and emperors in history.

"The Fiend known as the 'Mother Harlot'. She rides on a beast that had seven heads and ten horns and carries a golden cup, filled with the abominations and the filth of her actions."
—Shin Megami Tensei III: Nocturne compendium

Mother Harlot, also known as The Harlot, is one of the fiends that the Demi-fiend must face in the events of facing Lucifer's trial of retrieving the Candelabra.

After the defeat of Sakahagi and Girimekhala at Yoyogi Park, rumors regarding a "Beautiful Woman" are heard among the residents of the park. Should the Demi-fiend choose to travel to the north chamber of the western entrance, he will be intercepted by The Harlot and transported to another realm. Facing off against the Demi-fiend, she shows her surprise about him simply giving away the Yahirono Himorogi after fighting Sakahagi and Girimehkala for it. Upon expressing her thoughts about him seeming more aligned with chaos rather than creation, she calls upon her seven-headed beast, who in turn questions the Demi-fiend about his resolve to gain a true demon's heart, even if he will forever be bound in darkness. Regardless of his answer, he will have to fight against The Harlot and her beast. Defeating her grants one of the Candelabra the Demi-fiend must retrieve, the Candelabrum of Beauty.

Once he reaches level 69, the Demi-fiend can summon The Harlot in the Cathedral of Shadows after defeating her using a Deathstone and performing a fusion resulting in a Tyrant during Half-Kagutsuchi phase.

In Shin Megami Tensei III Nocturne HD Remaster her name has been changed to Mother Harlot.

Mother Harlot appeared as the final boss for the hard mode of the Greatest Summit Decisive Battle event that was part of IMAGINE's 7th anniversary event and was fought on a battlefield resembling a heat-deformed helicopter pad of the TMG Building. She was encountered as a boss after clearing all ten floors of the Soul Prison instance and has a total of three forms in her boss battle. In her first form, she spawned alongside Anzu, Kingu, Ose and Flauros. After defeat, her second form appeared alongside the Four Horsemen of the Apocalypse, Matador, Hell Biker and Trumpeter. This form used the Gate of Babylon attack, which deals a fixed 999,999 damage to all enemies in range. Her final form spawned alongside Seth, Shiva, Vishnu, Beelzebub, Metatron and Astaroth. As the other bosses were defeated, her resistances were greatly decreased.

After defeating her, players had a chance of obtaining her plug-in item. She can be fused in a triple fusion of Pale Rider, Trumpeter and Hell Biker. As a player demon, she can learn the signature skill Cup of Babylon, which is an Almighty affinity shot with a high chance of inflicting charm and confusion.

In the alternative Shinjuku Babel's Abyss Tower instance, she appears as one of the four bosses. The battleground for this fight reuses the elevator aesthetic from the seventh anniversary event. Unlike the original fight, she only appears alongside Trumpeter and does not have multiple forms.

"The Fiend known as the 'Whore of Babylon'. Riding a beast with seven heads and ten horns, she carries a golden cup of abominations, and the filth of her acts."
—Shin Megami Tensei: Strange Journey compendium

Mother Harlot appears as an extra boss battle in Sector Eridanus that can be fought at the behest of the angels Aniel and Kazfiel by battling them in tandem with Law alignment. She has been captured by the angels, who wish to see her dead. The protagonist, at her defeat, can elect whether finish her and her dragons, let her leave or stand in place and see how her dragons kill her and die. In either case, the angels reward the protagonist with the Amanomi Sword, the most powerful sword in the game. After her defeat, she can be summoned by special fusion using the Four Horsemen of the Apocalypse as fusion material.

Mother Harlot is faced in the New Game Plus Challenge Quest, Ishtar, Goddess of Harvest, unlocked only in the Chaos Path. Found northwest in the Ikebukuro Region, she is one of the demons whose soul originates from Ishtar. Minako obtains her soul upon Mother Harlot's defeat. Defeating Mother Harlot unlocks her as a special fusion between Trumpeter, Orcus, Ishtar and Legion. She's the highest-leveled Fiend of the game, and her fusion requires defeating all hidden Fiends save for Chemtrail, as Trumpeter requires the four Horsemen as fusion material, each horseman save for White Rider uses the previous one as part of its own fusion, and White Rider's own fusion requires Matador.

Mother Harlot, along with all the other Fiends, is encountered in Twisted Tokyo. Mother Harlot is encountered on B46F and drops the Ring of Babylon (accessory, nulls all ailments, Enduring Soul) on second cycle onwards. She is fought at level 994 on cycle 9.

Mother Harlot prefers to strike with Trisagion, Ice Age and Thunder Gods, and they are not augmented with pierce passives. However, her AI is smart enough to not target any party member who is immune to those ailments, and if everyone happens to be immune she will be predisposed towards Almighty spam. Her Death Lust and Babylon Goblet attacks inflict panic and charm, but most deadly is Antichthon, especially if she augments it with Smile Charge. Since her base attacking stats are high enough to make her attacks hit incredibly hard unless buffered by resistance, buffs and debuffs are practically mandated during the fight, even if she counters with Dekaja or Dekunda.

Mother Harlot, along with the other Fiends that held Menorahs and the Demi-fiend, are set to appear as part of the Return of the True Demon DLC pack. As before, defeating Mother Harlot unlocks the ability to fuse her.

Mother Harlot appears as a Persona of the Empress Arcana. While she is fusible at level 69 in Persona 3, she is bumped up to level 74 in Persona 3 FES. She can also be found during Shuffle Time in Monad and the final 7 floors of Empyrean.

She can be obtained via Shuffle Time in Heaven and the Magatsu Mandala.

"The fiend known as the "Whore of Babylon," riding a beast with seven heads and ten horns, she carries a golden cup of abominations and the filth of her acts."
—Persona 5 background

Mother Harlot is the ultimate Persona of the Empress Arcana, only available by maxing Haru Okumura's Confidant and fusing her in the Velvet Room. Mother Harlot is one of two Personas to learn Mudo Boost and Ice Age, and one of four to learn Ice Amp and Debilitate. Mother Harlot is the only natural source of the Null Bless skill. Itemizing Mother Harlot using Electric Chair execution creates the Claiomh Solais, the strongest melee weapon for Morgana with 280 ATK, 90 ACC, as well as additional +50 SP.

In Persona 5 Royal, during a fusion alarm, Mother Harlot can also give out Claiomh Solais R, which is a stronger variant of the original weapon.

"The 'Mother of Whores' mentioned in the Book of Revelation in the Bible.
She is depicted riding an unholy crimson beast with seven heads and ten horns, while holding a golden cup of filth in her hand.
The 'Mother of Babylon' is described in chapter 17 of Revelation. The beast's heads and horns represent 'kings', and the woman herself is the 'great city which reigns over the kings of the earth.' This imagery has been interpreted as an allegory of the Roman Empire."

Mother Harlot appears as one of the downloadable demons in the game, and can only be fused using Legion and Mot.

"A demoness also known as the Whore of Babylon in the Book of Revelation. She rides a great red beast with ten horns and seven heads and holds a foul golden goblet. There is a detailed description of her in Revelation 17. It is said that the heads and horns represent "kings," and describes her as "the great city that rules over the kings of the earth."This image has been interpreted as an allegory to the Roman Empire."
—Shin Megami Tensei: Liberation Dx2 compendium 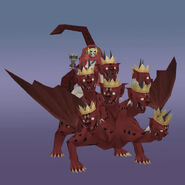 Mother Harlot as she appears in Shin Megami Tensei IMAGINE

Mother Harlot as she appears in Persona 3 the Movie 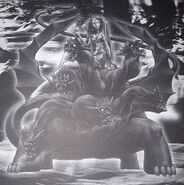 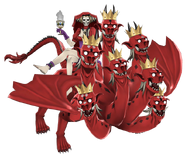