Hideyuki Hori
"If you refuse to obey me, then you must be eliminated."
—Mother Computer, Persona Q2

Mother Computer is based on a cross between Shuji Ikutsuki and fictional futuristic AIs who had obtained singularity. It appears as a large, green hologram head resembling Shuji Ikutsuki, and its eyes are obscured by a pair of glasses. Its eyes are large and have deep-colored sclera. The projector that creates this hologram and acts as its main body is a pillar that resembles a radio tower with a spherical tip and has a pattern resembling the sephirot on its pillar.

The Mother Computer is a dictatorial AI that considers all personality and uniqueness as a crime. It believes that true utopia can only be achieved by destroying all traces of personality and uniqueness from a person, and thus creates, maintains and commands robots that are completely identical in appearance and lack any personality. It also has traits like the original Shuji Ikutsuki despite being a different entity, as both it and Ikutsuki possess a savior complex, believing that their erroneous beliefs are absolute, and both also have tendencies to make bad puns.

An AI that managed to take over a world that is destroyed by repeated wars. It believes that personality and uniqueness is what caused the wars and by removing all traces of it from the world, no wars will ever happen. Therefore, it recreates the entire world into a futuristic utopia filled with identical black robots devoid of any emotion and personality. However, a threat known as UIY-2249 appears, which is a robot with personality and uniqueness, and it seeks to remove her because she possesses the very traits it detests, and thus disrupts its own version of peace. It operates via an Overseer, again resembling Shuji Ikutsuki.

Despite the Overseer having been supposedly defeated, the central broadcast system notifies the city in the world that irregulars are going on a rampage, signifying its existence as the true ruler of this reality. As the party enters the central server with the assistance of UIY-2249 who is named Ribbon by them, they finally reach the room containing the god-like AI. The AI announces its detesting of uniqueness and personality, and claims that anyone who has them are errors and irregulars who do not have a reason to survive. When the team denies him, it proceeds to claim that it is the standards of the world and insults Ribbon as an irregular that must be destroyed. The party continues to deny him with the help of Ribbon and he attacks the party.

In battle, the Mother Computer demonstrates its abilities of full regeneration and is practically unbeatable. Futaba figures out a plan to hack Ribbon into the computer, blocking its auto healing. After the second time, the Mother Computer's healing is blocked and the team is seemingly able to defeat it. However, it reverse hacks Ribbon to heal itself once again and attempts to control her, which she resists and activates Orgia Mode with the help of the party, completely blocking its auto healing and the party is able to finish him off.

After it is destroyed, Ribbon deactivates due to energy overload and Futaba and Aigis try to repair it. Despite the seemingly failed repair, when the staff credits roll, Ribbon was successfully repaired and she was free to create a real utopia with uniqueness and personality.

It was later revealed that the Mother Computer's appearance and behavior are based on one of Hikari's traumas and the one that directly led to her complete breakdown. When she was young, she wanted to become a film director, a dream inspired by her father who was a projectionist. As she has to participate in the filming of movies so she could make one for her father to watch, she does not study regularly. Her relatives saw this and berated her, asking her to study and work like a normal person and threatened to discuss matters with her parents. However, they could not as her father does not come home early often and her mother was absent, so they punished her instead and her uncle attempted to confiscate her father's camera from her, but she successfully kept it.

The dehumanization and rejection causes Hikari to view herself as an irregular and an error that needs to be disposed of and she also began to question if she even had a reason to exist. Surrendering her personality due to being overwhelmed by combined traumas and grief, Hikari would constantly lock herself out in her room afterwards, setting stone for the events which dealt the finishing blow that ruined her life.

The Mother Computer's radical detesting of uniqueness and personality is the same as her relatives and its appearance as Shuji Ikutsuki is based on her aunt, who shares the same hairdo and trench coat as his Overseer form as well as from S.E.E.S' perception of non-authoritarian parental figures. Its constant talking of punishing irregulars also relates to her uncle trying to confiscate her father's camera from her, and its attempts to manipulate Ribbon to forget her personality might stem from how Hikari was driven into self-suppression by her relatives.

In the Depths of the Theater District, one of the Negative Film projectors creates a monochrome version of the Mother Computer. It boasts that its enforced conformity is a beneficial system for society, and a world without individualism is also one without conflict. This version of the Mother Computer does not have a hacking phase, has a permanent weakness to Bless and Curse, and will never recover its health.

During the credits of the game, Futaba, Fuuka, Ribbon and a black robot plant flowers on the remains of the Mother Computer.

This is a highly time and resource consuming boss fight if the party goes in unprepared. Before going in, it is advised to have at least 5-6 types of unique Link skills and elemental skills, numerous SP recovery items and at least two Dekunda users. Utility items are also recommended; any elemental bullets can be used to compensate for missing elements in the party, and Purifying Salt can safely substitute for the need for Dekunda in the party. While it cannot be affected by most binds or ailments, it remains susceptible to Agility Binds which can contribute to survival.

The Mother Computer cannot be defeated traditionally by depleting its HP. Even if a New Game Plus party beats down on it to empty its HP, it will remain standing and continue fighting like normal. The fight has three phases, none of which can be skipped.

During the first phase, the Mother Computer has no weaknesses and essentially demonstrates its attacks. It starts with Denial, which disables one random skill per party member, lasting for two turns. This can become a point of frustration if it happens to disable all of the party's healing skills or a vital attack skill for its later phases. However, Denial is a debuff and can be cleansed with Dekunda; if Dekunda itself gets disabled in any case, a Purifying Salt can serve its purpose.

Its other dangerous attack is Synchronicity, an Almighty skill that always does enough damage to force every party member's HP to match the lowest among the party (and dealing 1 damage to the sole member at lowest HP). This skill will never miss, even through an Agility Bind, and can easily knock the whole party out of Boost. It also has other single-target skills that induce binds or debuffs, and rarely busts out Elimination which does high Almighty damage to a single target.

Because it has no weaknesses for the first phase, avoid needlessly consuming SP and attack it almost exclusively with physical skills (and even normal attacks if necessary). It signals its change of phase by recovering 3,600 HP with Auto Recovery after it's received enough damage.

During this second phase, Futaba will tell the party to hack into the Mother Computer using Ribbon. The party has to hit it with a specific element 10 times in order to proceed to the next phase. Attacking with that element will count as a weakness and advance the hacking counter, while attacks with others will be resisted and reset hacking progress. Link follow-ups will also contribute to the hacking counter, and physical attacks will not trigger a reset if resisted. During this phase, the Mother Computer cannot be analyzed and will change weaknesses every turn; however, Futaba will point out its weakness at the start of each turn. If the party needs a reminder, they can back out of the party commands menu to prompt Futaba's hint. A Link skill backed up by Triple Link and enough follow-ups from the party can clear the hacking phase within 2 to 3 turns.

Repeat the hacking process one more time and it will become vulnerable again; Unlike the previous time, it is not weak to all elements (Bless and Curse still work though), but they still do increased damage to it.

Once it is nearly defeated, it will use the skill "Urgent Recovery" to fully recover its HP. This is merely a bluff and a cutscene will play; after the cutscene, it will have only 1 HP and can be finished in a single regular attack. 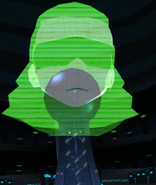 Mother Computer, as it appears in-game 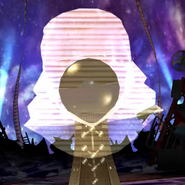 Mother Computer in the credits.