Moros is a Persona in the series.

Moros is the personification and god of doom in Greek mythology. He is the son of Nyx; brother to Hypnos, Nemesis, and Thanatos; elder brother and leader of the Moirae Sisters. Moros manifests as a shapeless spirit that bears the responsibility of revealing the day of one's impending demise. Because of this, he also came to be known as a spirit of depression, for the souls whose deaths he revealed are ridden with sadness and anguish.

Moros' name is also the origin for the word "morose", meaning sullen, ill-humored or gloomy.

Moros is Jin Shirato's artificially summoned Persona, born from the experiments performed by the Kirijo Group. Moros appears as a pendulum-shaped bipedal robot with one arm and glowing inscriptions hovering above his head, signifying his summoner's proficiency in information technology. Like his myth's namesake, Moros delivers the message of doom by exploiting the elemental weaknesses of an enemy. 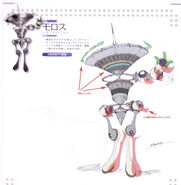 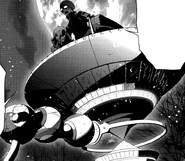 Moros in the manga adaption

Moros in Persona 3 The Movie