Moloch or Chemosh, is a demon in the series.

Moloch, or Molech, refers to a particular kind of sacrifice or possibly a god associated with fire, known first and foremost from the Bible. According to Leviticus, children were burned as an offering to Moloch. While Christian and Jewish tradition present Moloch as a demonic idol, an influential theory first formed in the the 1930s interprets the name as a term for a form of sacrifice analogous to the Punic mlk.[1] According to the Romans, child offerings were one of the main forms of worship of the "african Saturn" (Baal Hammon), the tutelary god of Carthage, leading to the assumption that mlk known from insctiptions from Punic sites is the rite of child sacrifice.

In the middle ages, the idea of Moloch as a bull-headed monster developed, possibly under the influence of the myth of the Minotaur.[2] Moloch understood as a demonic entity absorbed elements of Roman texts about Baal Hammon, leading to the incorrect assumption that Moloch is a title of the main biblical Baal (Hadad), an unrelated deity. While the extent of Carthaginian child sacrifice (or, according to some, the very historicity of it) is debated, it is generally agreed that it was not a feature of Mesopotamian religion[3], and extensive offering lists from Hadad's major cult center, Ugarit, indicate only the sacrifice of animals and wares.[4]

Scholars who reject the interpretation of Moloch as a term for sacrifice instead associate this name with various little known deities of the ancient Canaan and Mesopotamia, including the Ammonite lead god Milcom; Malik, a god or a divine title from Ebla, Mari and Nineveh; or mlkm from Ugaritic god lists, possibly an underworld deity. However, none of these figures are associated with human sacrifice, let alone with the specific form of it associated with Moloch.

Due to a passage from the Book of Kings, according to which the Moabite King Mesha sacrificed his own son to Chemosh to achieve victory over Israel, Moloch and Chemosh were sometimes treated as interchangeable in old scholarship.[5]

Chemosh was an ancient deity first attested in texts from the bronze age city of Ebla. He was also possibly associated with Carchemish (before the rise of Kubaba as the most important tutelary deity of the area), as indicated by the city's name. A few references in Ugaritic texts might imply that he was originally an underworld deity similar to Nergal.[6] In later times, he became the national deity of the Moabites, as evidenced by the Mesha Stele and by a large number of theophoric names recorded in Assyrian sources. The Moabites also conflated him with the Arabian Ashtar to strenghten his role as a god who, according to their beliefs, brought them victory in wars. In the past, this was erroneously understood as an implied connection between Moloch and Ishtar or Astarte.

In the Bible, Chemosh is mentioned in the compound "people of Chemosh," referring to Moabites. A single passage from the Book of Judges calls him the god of the Ammonites instead, contrary to other biblical accounts. Deuteronomy lists Chemosh as one of the forbidden foreign idols embraced by some Israelites. In this context, he's grouped with Astarte and Milcom, representing Sidonians (Phoenicians) and Ammonites, respectively. As an idol he's also called "the abomination of Moab."

In the Book of Numbers, under Moabite influence, the Israelites started worshiping an otherwise unknown Moabite god referred to as "Baal Peor" (an inspiration for the name of the demon Belphegor) who was identified as one and the same as Chemosh in John Milton's Paradise Lost and in some later scholarly sources.[7] However, modern Bible researchers treat Baal Peor as a distinct deity.[8]

Moloch rules over the Lands of Rage. He drops the Orb of Doubt, allowing the protagonist to travel to the Forest of Confusion.

Moloch is mentioned in dialogue and his tail drills through Tokyo Millennium. He can be seen at the abyss, as a huge golden statue, but it is impossible to speak to him.

Moloch can only be acquired through a triple fusion of Coatlicue, Artemis and Orobas. He appears as a miniboss in Ikebukuro's Zoushigiya Cemetary and as a mob within Ueno's Mirage instance.

"A Canaanite god of fire. It is said that a bronze statue of a man with a bull's head was placed at the altar. The statue's hollow insides were heated and the sacrificial children were thrown in. His name is mentioned in the Bible as the god of an atrocious sect."
—Shin Megami Tensei: Strange Journey compendium

In Strange Journey, Moloch is the true form of Morax, encountered in Sector Fornax, explaining why Morax is of the Tyrant race rather than Fallen. Moloch appears as a boss and is available through special fusion after defeating him, using Morax and Ose as ingredients in the fusion.

"A Canaanite god of fire.
Tradition states that a bronze statue of a human with the head of a female ox would be placed at the altar as its vessel. It is said that the statue would first be heated with fire, then children would be put inside as a sacrifice. The Bible mentions its name as a cruel pagan god."
—Shin Megami Tensei V lore

Moloch is the boss of Scenario 16.

A sun god worshipped by those who live on the Moab, a mountainous strip of land that lies on the eastern shore of the Red Sea. Chemosh was enshrined in the temple of King Solomon, and was sometimes identified as the Ammonite god Moloch. He became known as an "abomination" and an evil prescence.

Later generations would commonly use Chemosh's name when calling evil spirits to attach themselves to people."
—Akuma Zensho

Moloch is the name of a band whose reunion concert the protagonist buys tickets to early on in the game. The ghost of Mikiya, the keyboardist of the group, is fought in Toa TV Station's power room along with Julia and Speedy. After Orgone Ghost's defeat, a woman in Yaraiginza mentions that the reunion concert had to be canceled. The demon is instead name Chemosh.

Moloch is a demon exclusive to the 3DS remake, available after Nemechi evolves into the cat form (female growth path), and costs 150 D-Souls. He is the lowest level Tyrant race available in the remake.

"A Canaanite god of fire. A bronze statue of a man with a bull's head stands at his alter. The statue was heated and sacrificial children were thrown inside."
—Persona 5 background

Moloch is the seventh Persona of the Hanged Man Arcana and can be found regularly as a Shadow in the Depths of Mementos, with the title "Sacrificial Pyrekeeper." He is one of three sources of the Ghastly Wail and Nuke Amp skills and the only source of the Drain Fire skill. When itemized through Electric Chair execution in the Velvet Room, Moloch yields a Nuke Amp Skill Card.

Upon escaping the casino at the start of the game, the protagonist confronts a Shadow manifesting as Moloch. Upon repeating the events that lead to his capture, the scene will be repeated. Unlike the previous time where only Arsène can be used, the protagonist can use his own Personas to defeat Moloch. If the protagonist already has Arsène, the dialogue will be altered.

When encountered as a Shadow in the Depths of Mementos, Moloch will actively attempt to inflict Fear on the party with Evil Smile before casting Psiodyne for Technical damage, occasionally using Ghastly Wail to outright kill the afflicted party members.

Moloch is an agent of the angels who is watching over Earth Expanse while Isis is away. He attempts to guide Takaharu Ougi to becoming a Angel Child who will lead the world to a new future. Viewing Masaki Kuzuha as a threat, he attempts to kill him only to die at at the Devil Child's hands instead. 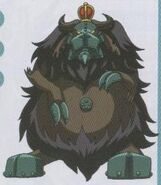 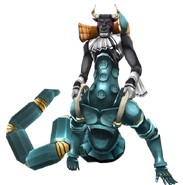