Mizuchi is a demon in the series.

Mizuchi are Japanese dragons and water deities. They are sometimes referred to as rain-controlling snake deities.

They are sometimes contrasted with other river dragons or snake-like beings, such as the Chinese Jiaolong, the Indian Naga, the Aztec Tlaloc and the Greek Gorgon.

"A water spirit in Japanese mythology. It appears around lakes full of fish. It has the ability to use illusions to trick its enemies."
—Shin Megami Tensei III: Nocturne profile

Mizuchi appears as an enemy in the Kabukicho Prison within the mirage. It can be contracted once the Demi-fiend is level 34 or above.

A large Mizuchi engorged on Magatsuhi serves as the Mantra's warden in Kabuchiko Prison, where Isamu and a large number of Manikins are being imprisoned. During his boss battle, it shrinks in size the more damage it takes, which causes the strength of the spells it can use becoming weaker. As a boss, it possess a skill called Mirage that inflicts Panic on the party, which if not healed, can cause the Demi-fiend to lose a lot of Macca during the course of the fight.

Mizuchi's defeat allows Isamu to escape into the Amala Network and for Futomimi to gather the other Manikins and begin the Exodus into Asakusa.

"A snake god considered the lord of all freshwater creatures, the Mizuchi is thought to have originated from the Chinese Jiaolong.
A white pattern circles its neck, while its back is covered in blue blotches. Five colors of cotton-like strands of light decorate its sides, while its tail ends in a knot. A Mizuchi is said to take over and rule any lake containing 2,600 fish.
Its Chinese name signifies a race of dragons, while its Japanese name means "aquatic spiritual power". Although once a revered presence, since the advent of Buddhism it has come to be seen as a creature of evil."

Mizuchi can only be acquired through fusion. Enemy variations appear as support for Yamata no Orochi and Genbu when they act as bosses.

"Enormous snake that inhabits the sea. It can cause major floods and tidal waves."
—Demonary, DemiKids

A Mizuchi attempts to assassinate the Devil Children alongside a Barchiel, but the children's demon partners arrive and attack them before they could. Mizuchi faces off against Jin and his partner Rand. 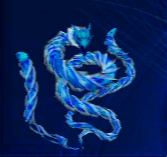 Mizuchi as it appears in Shin Megami Tensei NINE

Mizuchi as it appears in Shin Megami Tensei III: Nocturne.