Akira/Aquila
"Over a thousand and five hundred years have passed since I formed the pact with my master... You are either truly skilled or fools indeed to ignore his warning. I will dine on your blood that wishes to mingle with the Unclean!"
—Minotaur, Shin Megami Tensei IV

Minotaur or Minotauros is a demon in the series.

The Minotaur, also known as Minotauros, is a beast of Greek myth, part bull and part man. He was kept by King Minos in a labyrinth created by the great Greek engineer, Daedalus. Every year, Athens was forced to send tribute to King Minos in the form of sacrifices to the Minotaur. This continued until the hero Theseus slayed the mighty beast after entering the labyrinth where the monster was and used the Ariadne Thread to recover his way home. In some tellings, the Minotaur is given the personal name Asterion.

The Minotaur is the main boss of the Tower of Daedalus. Upon his defeat, he drops the Orb of Silence, which allows Nakajima to use the elevator.

The Minotaur reprises its role as the main boss of the Tower of Daedalus. However, when the Orb of Silence is used on a strange statue, it unseals Pazuzu.

A demon who made a pact with King Aquila of the Eastern Kingdom of Mikado over 1,500 years ago. His task is to kill those who go too deep into Naraku and attempt to go to the Unclean Ones' country. He will be impressed with the strength of the Samurai as the battle goes on or unimpressed depending on Flynn's choices, which will either decrease his strength or Flynn's. After being defeated, he will apologize to his dead master as their pact ends with his death, but believes they can entrust the future to the prentice Samurai.

As the Minotaur's attacks can heavily damage multiple party members, bringing a demon such as Leanan Sidhe or Fortuna with Media can benefit Flynn during the battle. The Knocker and Fomorian demons in the area can be used to fuse a Spriggan with Bufu, allowing it to hit the Minotaur's weakness while it resists Physical attacks as well as provide extra defense if Knocker learns Rakukaja before being fused. One other demon that resists physical attacks at this point would be Lham Dearg, provided that one has the patience to level them up. Minotaur can easily tear through even level 19 demons with maximized Rakukaja buffs active, so utilizing Sukukaja or Sukunda to make him more likely to miss and lose turns can save the party a lot of trouble.

Minotaur will use War Cry only once near the start of the battle. If Walter is the current active companion, he may use Agi, which can possibly bestow the Smirk status to the Minotaur when it is blocked. Walter will stick to using his physical attacks after he casts Agi once.

Initially, the Minotaur will alternate between using his regular attack and Labrys Strike, a nasty Physical attack that deals 2-3 hits of medium Physical damage across the party. It can hit the same party member more than once. Once his health gets very low, he will start using Oni-Kagura and Charge. These moves make him very dangerous, so he should be finished off as quickly as possible.

If Flynn has reached level 15 before fighting the Minotaur, he may also fuse a Jack Frost to increase potential damage with its Bufula skill.

Minotaur can be fused via a special fusion of Stonka, Night Stalker and Orias once Flynn can control level 33 demons. Minotaur can teach Flynn the Oni-Kagura and Charge skills through his Demon Whisper.

Minotaur is the boss of Scenario 08.

Minotaur can perform the combo Bone Crush with Dydra, which deals earth damage to all foes for 25 MP. 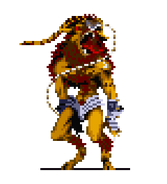 Minotaur as it appears in Kyūyaku Megami Tensei 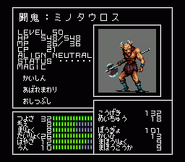 Minotaur as it appears in the Shin Megami Tensei Sega CD remake. 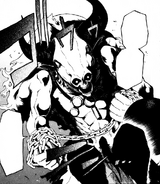 Minotaur as it appears in Shin Megami Tensei IV -Prayers-

Minotaur as it appears in Last Bible II

Minotaur as it appears in Last Bible Special
Community content is available under CC-BY-SA unless otherwise noted.
Advertisement