Xanthe Huynh
"I see you finally made up your mind...my dear, fated princess. Freedom for you must stem from betrayal. If you still yearn for it now...then you must not err. Now, tell me...who shall you betray? Yes, that gaze...! I can finally display my true strength. I am thou, thou art I...Let us adorn your departure into freedom with a beautiful betrayal."
—Milady, Persona 5

Milady is a Persona in the Persona series.

Milady de Winter, more commonly referred to as "Milady" is a fictional character created by Alexandre Dumas for his seminal novel The Three Musketeers. Her main relation with the novel's titular heroes is her personal vendettas first against the novel's hero d'Artagnan after he discovered she was branded as a criminal with a fleur-de-lis, then against his mentor Athos who was her former husband. Her conflict with them ends in her death by beheading for her crimes.

In both the book and subsequent adaptations, Milady is depicted as a fiercely independent and manipulative villain: despite acting as an agent of Cardinal Richelieu in his machinations against Louis XIII and the Duke of Buckingham, she is also a force on her own account, bringing others to ruin for personal gain. Her moniker of "Milady" is a title inherited from one of her husbands, whom she married under a false name, leaving her true identity a mystery.

Milady appears to be wearing a black and pink Rococo style dress, with red and pink vertical striped puffs on the sleeves of the dress that extends to her elbows and wearing pink gloves. The bottom of the dress is in a pink color with golden trim around the dress, which has a golden lip on the center of the dress that makes it resemble a smiling face. There are black and red curtain drapes around the dress underneath, a pink heart shaped frill around her waist with a red bow tied on the drapes and a knife next to on the center of the heart shaped frill.

When attacking, the dress opens up to reveal an array of ranged weaponry, including two Gatling guns, a bazooka, and a missile. Underneath the dress is a white pinstripe blouse with a light blue neck choker around her neck. She has no head, with her face instead being represented with a pink mask inset with yellow eyes. She holds a yellow and pink colored fan with black fur on her left hand, and holding the mask's handle in her right hand.

"The beautiful woman that appears in Dumas' "Three Musketeers". Branded with a fleur-de-lis symbol, she used many aliases to control nobility and get her vengeance."
—Persona 5 compendium

Milady is the initial Persona of Haru Okumura; however, she is initially very weak and lacks a stable form because of Haru's indetermination. When Haru learns from the Shadow Self of her father that he would let her fiancé Sugimura treat Haru as a disposable lover rather than wife for her association with the Phantom Thieves of Hearts, Milady begins to properly form and blocks the attack of the cognition Sugimura. She encourages Haru to learn to betray someone in order to gain freedom from her fateful family, to which Haru is finally decisive and reveals Milady's true form for rebellion against her father.

The book Woman in the Dark can be borrowed from the Shujin Academy Library after Haru fully awakens to Milady. It is based on the same figure, and it boosts the Proficiency social stat.

Milady specializes on Psy and Gun Skills, and her skill roster is generally revolved around those attacks and increasing their power with little or no support moves. However, the skill limit will make it difficult to use both elements as effectively as possible. She has a wide amount of non-attack spells, making her play somewhat of a support role if certain skills are chosen, such as Tetrakarn. Milady’s final skill is Heat Riser, which is the strongest buff in the game, raising the Attack, Defense and Accuracy/Evasion of one party member for 3 turns.

Milday as she appears in Persona 5 The Animation 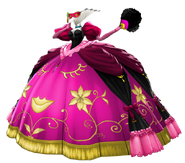 Milady in Persona O.A. (No Background) 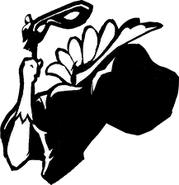