Mikuratana-no-Kami is the main antagonist and final boss of Persona 4: Dancing All Night.

Mikuratana-no-kami is the name given to a necklace of beads given by the god Izanagi to his daughter Amaterasu as a representation of her rule over Takamagahara. The Kojiki, a Japanese chronicle of myths and legends, makes reference to Mikuratana-no-kami as a deified jewel.

"A being that calls itself the "collective will of all who yearn for bonds". It was called forth by the hearts of those who wish for a shallow, safe bond with no risk of pain, and it lurked within Kanami Mashita herself to create the Midnight Stage."
—P4D Database

Mikuratana-no-Kami is a being manifested from the Sea of Souls, representing humanity's desire for easy bonds with others. She is referred to as the 'Eerie Voice' for most of the story and is responsible for the release of the "cursed video" on the LMB website. Those who watch it while wishing for a bond with others without pain have their Shadows removed and imprisoned within the Midnight Stage, while their bodies in the real world are placed into a comatose state. Here they are bound in ribbons and made to dance a dance that forces others to submit to her will. Her desire is the collective desire of people who want an eternal bond without pain, by subjecting people to the belief that they can only connect with others if they become the 'selves' that others wish them to be.

She adopts the physical appearance of Kanami Mashita due to her wish for bonds with others as an idol while forgetting the pain her idol Yuko Osada faced. She drags the members of Kanamin Kitchen, Kyoka Ochimizu, and the Investigation Team into her world where she repeatedly attempts to convince the formers into adopting the selves desired by others so that they may attain painless bonds. Eventually, she succeeds in dragging Kanami and the entire LMB audience into the Midnight Stage due to their collective desires. By dancing together, the Investigation Team and Kanami manage to convince her of their philosophy regarding bonds and she returns them all to the real world, but not before saying that a time may come when they may confront one another again. 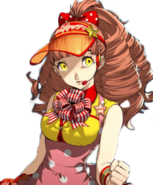