Midori is a very friendly girl with an extreme affinity for justice and love, which often makes her look extremely childish once she shows her true side. She follows her father's lesson of helping people no matter what; however she displays her desire to help people without thinking about the consequences of her own actions.

She is a popular internet cosplay idol under the handle, "Dolly." Her father died when she was younger and his strong impression as a tokusatsu stuntman inspired her to have heroic aspirations.[1][2] It was due to this strong desire to become a hero that she eventually felt out of place with people her age and turned to the internet, which led to her becoming a famous internet cosplayer.[3]

She was in Tokyo for an event and couldn't get out when the barricades were set up. Eventually she acquired a COMP from Atsuro Kihara, who had found it in a prior battle, and took it upon herself to "rescue the innocent" out of a sense of justice, drawing upon her father's stories for inspiration.

After acquiring her COMP, her death clock reduced as she entered dangerous territory in a reckless manner. Her actions to protect people scared those she wanted to save which led to her being attacked by an angry mob. It is possible, however, to save her and help her understand others' viewpoints and help her retain her innocence and sense of justice. Particularly, she had a profound effect on a tiny Jack Frost demon, who after heeding (and somewhat misunderstanding) her words about "the power of love" went on to become the much more powerful Black Frost, who can be also saved and recruited in several paths.

Midori, along with Keisuke and Yuzu, oppose Naoya's plan to make the protagonist the King of Bel and leave the party. Upon completion of Naoya's route, Midori and Yuzu are seen in the epilogue as the protagonist begins to wage war with the angels, and they hope that his heart stays human to the end.

But, should the protagonist choose to save the humans on Naoya's 8th day in Overclocked, she will join the party along with Yuzu before the fight with Metatron.

Midori aids the protagonist in becoming the Messiah.

Midori aids the protagonist in helping Gin and Haru banish the demons. She seems thrilled if Black Frost offers to join the party.

After escaping, Midori leaves the party to go home. She is seen soon after the protagonist re-enters the Lockdown, where she is cornered by SDF soldiers. Upon rescuing her, she rejoins the party.

Midori's role varies based on the protagonist's decision. If the protagonist chooses to kill the demon tamers, she and Yuzu will assist Metatron in the final battle. If the protagonist decides not to kill anyone, she asks to rejoin the party after Yuzu and Izuna convince the people in the Yamanote Circle to rally behind the Overlord.

Midori is enthusiastic about helping the Messiah bring peace into the new world order.

Midori has a movement range of 4 and fairly balanced stats, with a focus on magic, making her an overall solid unit. When recruited mid-game, she can be a faster and more defensive, but slightly weaker (in Magic) alternative to Yuzu. Her flexible availability in most routes, in addition to decent Magic and MP growth, makes her a great Magic user, and can be deployed alongside Yuzu or Keisuke to form a solid supportive / offensive core on most Days.

Midori is encountered here after she acquires her COMP. On both occasions, she is helping civilians who were being attacked by demons and must be assisted.

If the protagonist chooses to side with Keisuke rather than confront him, Midori leaves the party. Later, she confronts the protagonist's party alongside Kaido. 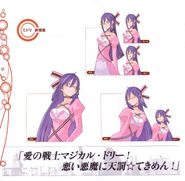 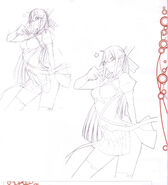 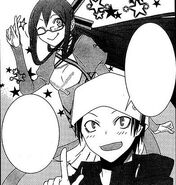 Midori on the volume cover